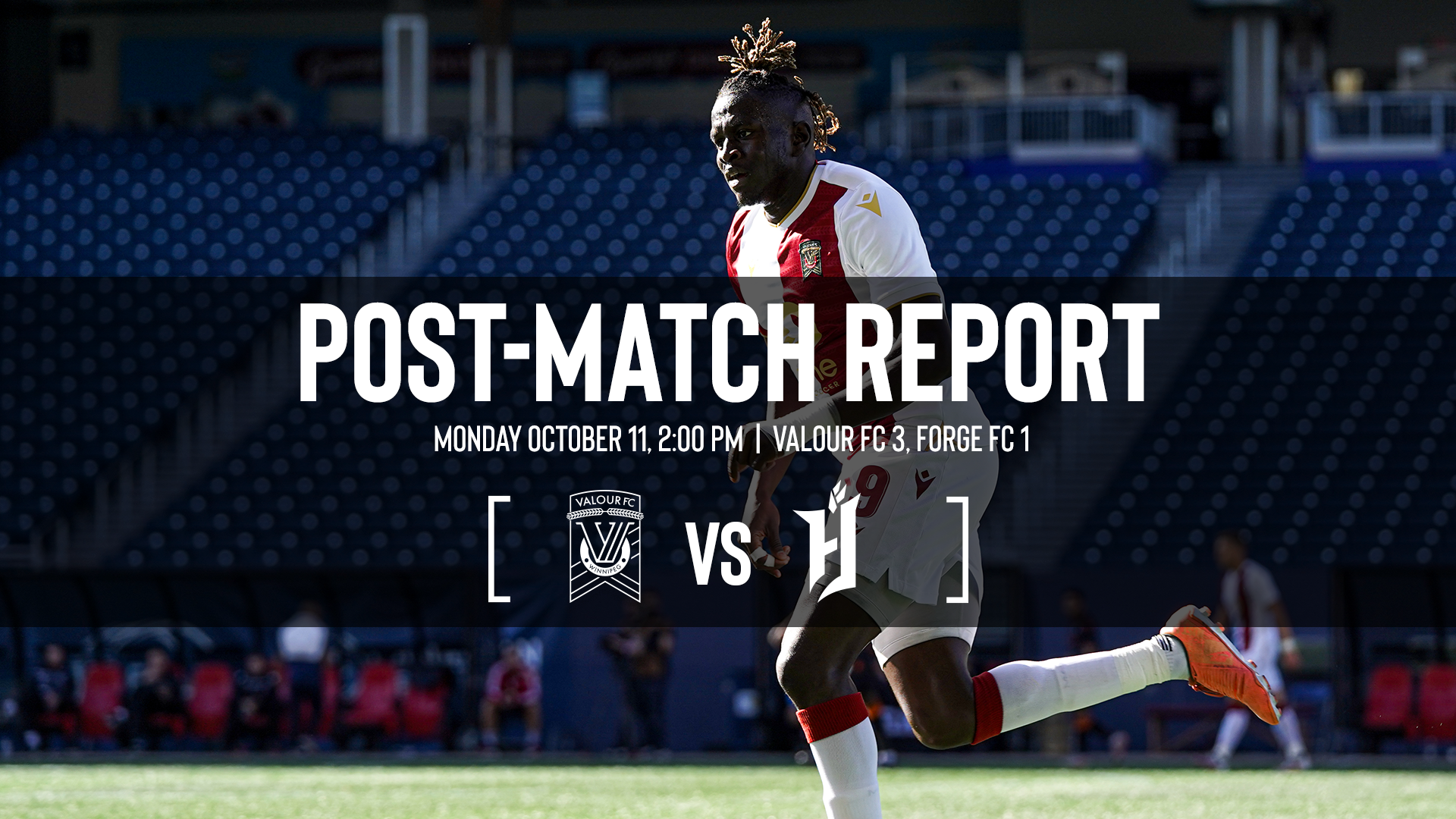 “You progress, you develop dynamics, but I think we’ve set a foundation that allows us to grow from there and the signs are encouraging.” | Valour FC 3, Forge FC 1
October 11, 2021

It is not only a first, but also a critical lifeline at an important point in Valour FC’s season.

Valour knocked off two-time defending champion Forge FC 3-1 on a pristine Thanksgiving Monday at IG Field and, in the process, not only secured the first win in the tenure of new GM and head coach Phillip Dos Santos, but breathed some life into their chase for the fourth and final Canadian Premier League playoff spot.

The victory extended Valour’s unbeaten streak to three – to go along with two consecutive draws – and also broke an eight-match winless streak that dated back to late August and a 3-nil win over FC Edmonton.

Valour improved to 8-4-11 (wins-draws-losses) and with the three points now has 28 on the season, keeping pace with HFX Wanderers, who knocked off Pacific FC 1-0 on Monday to vault ahead of York United FC into fourth place at 8-8-7 and 32 points.

York United is sandwiched in between with 31 points and a match in hand.

“It was a game we needed to win and we knew that from the beginning and ever since the new coach came in,” said Valour forward William Akio. “There’s been a lot of changes and these last four-five games we’ve been working on this new structure we’ve been focussing on and it came off today with everybody just ready to play.

“(The coaching change) was a big change and it was unexpected, but we all followed through with a plan. He’s a very, very good coach, everyone is listening very well and things are starting to come off.

“… It’s coming down to the end of the season and we know we need to get points on the board. It’s coming from within, all the boys have decided and worked on making these playoffs. It’s something we all really want to do and it feels like the momentum shift has completely changed things and we can just continue to get points.”

Valour opened the scoring early, as Rocco Romeo tapped home a perfect feed from Moses Dyer in the fifth minute – ending a two-match stretch for Forge FC in which they had not conceded a goal.

But the lead was snatched back just before halftime on a bit of brilliance by Akio, who worked down the right side before using his speed to slice inside and then bury a strike behind Triston Henry.

“That’s a goal you see at the top of the top,” said Dos Santos. “That makes all kinds of news if it’s scored by Messi. It’s scored by William, so you’ll see it a little bit, but maybe not worldwide.

“But that’s a world-class goal.”

Valour then got a critical goal in the 59th minute after some spectacular work by Raphael Ohin, who battled his way in clearing a chance at the top of his own box and through the midfield before feeding Dyer, who was clinical in his finish.

“I said it to the guys since Day 1: to win games you need to be a team that’s disciplined, that matches the opposition or even goes above the opposition’s effort,” said Dos Santos. “It was important for us to believe that we needed to respect a very good team that was in a very good moment, still playing on all fronts that they have to play (including CPL play, the Canadian Championship and CONCACAF League). We wanted to respect them, but not be afraid. Today, the team was very disciplined, very well structured.

“… There’s growth and there’s areas to grow. We’re getting better in areas that I think needed to improve in our game and there’s moments where now you can develop your idea as a coach. The most important thing is to set a platform and a foundation in things that you could impact immediately. From there, the idea of a coach is never over. You progress, you develop dynamics, but I think we’ve set a foundation that allows us to grow from there and the signs are encouraging.

“It’s far from being complete when it comes to the work that we needed to do here,” he added, “but you like to grow with results. It’s always better to grow with wins.”

Valour now has a win, two draws and two losses since Dos Santos took over. And after many years serving as an assistant coach and an administrator, it was also his first win as a professional head coach. Asked whether he was saving a special bottle of wine to mark the occasion, Dos Santos offered this:

“My family is here, they arrived last night. So, it’s going to be with them. It just happened they were here this game. They’re not here for long, so I want to spend quality time with them and that’s what I’ll be doing.”

-Valour entered the 2021 season having never beaten Forge FC, with just a single draw against five matches from the inception of the CPL through last year’s Island Games.

But Monday’s win was the third for Valour in regular-season play against the defending champions, with the lone loss a 2-1 setback in the Canadian Championship quarterfinal last month.

-The three goals for matched a season high for Valour and was the most the club had scored since that 3-nil win over FC Edmonton back on August 24th.

-Valour will have to chance down the final playoff spot while primarily on the road, as four of the next five matches are away from IG Field, beginning with Saturday’s trip to the coast to face Pacific FC.