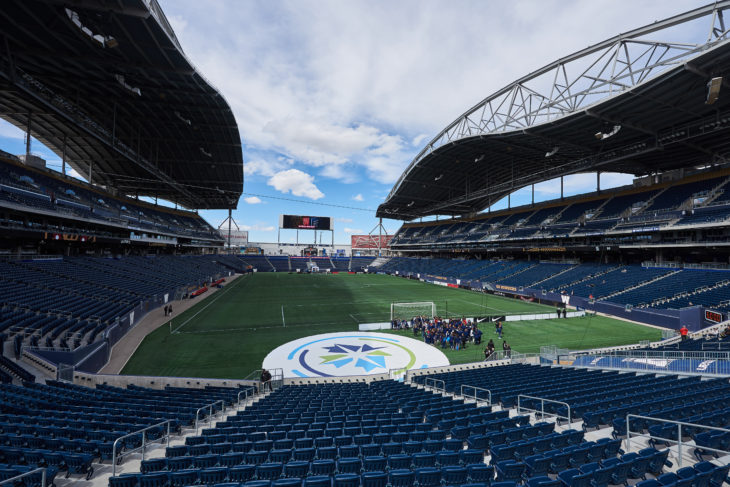 Valour FC’s inaugural season in the Canadian Premier League was historical, at times riveting and most-definitely memorable – sometimes, yes, for all the wrong reasons.

But there’s little doubt Winnipeg’s newest professional sports franchise left an indelible impression on this community, as much for the work GM and Head Coach Rob Gale and the players did off the pitch in this town as what they did on it.

It isn’t a simple exercise, starting a franchise from scratch in a brand, spanking new league. And, especially so in the shadow of the Blue Bombers, Jets and Goldeyes. But Valour had set down some roots and, as much as many fans would like to put 2019 in the rear-view mirror – the club finished last in the spring season and fifth in the fall season with an overall record of 8-4-17 – the end of the calendar year is as good a time as any to revisit the top stories of the season.

With that in mind, and in no particular order, here are our top Valour FC stories/moments of 2019…

Valour FC opened with a dramatic win in its first-ever match, a 2-1 victory over Pacific FC in front of 2,360 fans at Westhills Stadium in Langford, B.C. on May 1st.

Stephen Hoyle, the first international signing by the club, opened the scoring in the 23rd minute and Dylan Carreiro, a Winnipegger, played the hero by drilling home the winner in the 78th minute.

“I’m very, very happy right now,” Carreiro told valourfootball.club after the win. “I was telling a few of the boys that I had a feeling. I’ve dreamt of this for a few days now and that I was going to come on and score a goal.

“I was fortunate enough to help the team get the three points and I’m delighted to score my first goal in Valour history.”

Substituted into the match in the second half, Carreiro scored the winner while another Winnipegger, goalkeeper Tyson Farago, stopped four of five shots. In the process as Valour became the first CPL team to win on the road.

Just three days after their inaugural match, Valour FC opened at home in front of 9,699 fans at IG Field – the second-largest crowd of the CPL season to the 17,000 who attended Forge FC’s first game at Tim Hortons Field on a free-ticket promotion.

The home side fell 2-1 to FC Edmonton – despite out-shooting them 20-8 —  in what was the first real pro soccer contest in town since the Winnipeg Fury of the old Canadian Soccer League in 1992.

But the crowd and the atmosphere was positively electric.

“That was fantastic,” said midfielder and Winnipegger Dylan Sacramento. “To see this, to see soccer in this stadium, shows we can make this work and we proved that today as a city. This was really special for me. I had my family, my parents here. My buddies from Toronto flew in to watch the game. My girlfriend was here with all here friends.

“It was an amazing crowd and the people seemed to really enjoy the game. People can see we have quality on this team and that’s why we’re so disappointed right now and the room is really quiet.

“But, regardless of the result, I can see people coming back continuously and having a good time here.”

Valour FC didn’t regularly give their supporters a ton to cheer about in 2019 – they won just four and tied two of 14 regular-season home matches and were out-scored 32-17  in the process – but one aspect of games at IG Field was consistent: the rabid supporters in Section 144, dubbed ‘The Trench’, brought it each and every match day.

They sang from the opening kick to the final whistle and, on those nights when Valour FC, provided a good chunk of the entertainment value with their passion and humour.

“I really think this will be successful,” said Red River Rising President Nicky Cottee, just before the inaugural match “I’m not originally from Winnipeg, I moved here about four years ago from Ontario, and the thing that strikes me is how people in this city really do get engaged and support their teams.

“What is going to be neat is us being in here and the support becoming a little more organic. It’s something maybe some fans aren’t used to and may take some time to build, but I really hope the whole stadium slowly starts to sing with us and by the end of the year it will be even more electric. That’s what I am excited about.

“A couple of our group go back to the Fury days and I was chatting with one of them and they said it was just so different back then. There would be five of them trying to get the stands going. A lot has changed since then, and that’s exciting.”

A season isn’t always sunshine and rainbows, and the low point of the Valour season – and, unfortunately, one of the top stories of the year – was an 8-nil home beatdown administered by Cavalry FC on September 2nd.

There’s no sense reliving the gory details, but Valour trailed 4-0 at halftime and then gave up three more goals in the final 11 minutes in the defeat.

The team’s Twitter account tried to have some fun with it during and after the defeat, highlighted by this tweet after Watford lost by the same score to Manchester City later in the month.

There’s also no running away from another lowlight of the Valour FC season which, nonetheless, was one of the top stories. In early August in a match in Halifax against the Wanderers, Valour FC captain Jordan Murrell was shown a red card after coming into contact with the referee. As he left the pitch, Murrell kicked a scorer’s table near the sideline and was then suspended by the CPL for six games and had his captaincy stripped.

Murrell issued a heartfelt apology upon the club’s return from the east coast.

Tyler Attardo took the long route to making his debut with Valour FC, first impressing at the Open Trials in the fall of 2018 to then taking time off school during training camp in the winter.

But with almost every day of work you could see his confidence level growing to match the obvious skillset and by the end of the first season he had not only tied with Michael Petrasso for second on the team with six goals, he became the youngest goal-scorer in CPL history on June 20th in a 2-1 loss to Pacific FC at just 17 years old.

“It’s gone by fast, for sure,” Attardo said at the end of the season. “I can remember the preseason and being in the Dominican (Republic) like it was yesterday. I remember our first game against Pacific and then our last one this past weekend… it’s crazy to think about how fast it’s gone by.

THE LOCALS STAND UP

Attardo, Carreiro, Sacramento and Farago, all mentioned above, weren’t the only Manitoba products to contribute to wins for Valour FC in Year 1. All told, nine Manitobans suited up, also including Marco Bustos, Ali Musse, Raph Ohin, Federico Pena and goalkeeper Svyatik Artemenko, who dressed but did not see action near the end of the season.

Bustos was especially dynamic, leading the team with seven goals and finishing second to Petrasso in assists with three.

It’s only natural to expect a little bit of everything in a CPL season that began in late April and didn’t finish until November 2nd. But Mother Nature seemed to be particularly cruel when it came to Valour FC games.

Valour FC played in snow in Calgary, in 48C heat in Hamilton and had a game in Edmonton in July delayed 4 ½ hours by lightning – not long after another visit to the Alberta capital had to be postponed for a day because of poor air quality due to smoke from forest fires.

“We’ve had smoke here, we’ve had rain, should we have wind? What do we need next? Maybe we should have Earth Wind and Fire play the half time show,” joked Gale with reporters in Edmonton after a 0-0 draw. “We haven’t had a lot of luck here, have we. It’s always entertaining.”

One of consistent themes for Valour FC in its first season, unfortunately, was an inconsistent lineup – mostly due to a swack of injuries. It’s impossible to build any kind of cohesion or chemistry in any sport with a starting 11 that is constantly changing and Valour FC paid the price for that.

“We had a lot of misfortune with injuries, 103 missed days by players which was league-leading, unfortunately, by a long distance,” said Gale. “We weren’t consistent enough with the players that came in… when you can’t keep a balanced side because of injuries or suspensions or keep the same 11, the other players have to be able to step up and compete.

“That’s our biggest takeaway if we compare where we were. With our defensive injuries we weren’t nearly difficult enough to beat. And with the other pieces and the other young professionals, they weren’t ready to make this their full-time job and show to us they could compete at this level and come back next year and be a winning franchise.”

Let’s be clear here: Rob Gale is as competitive as they come and what unfolded in Year 1 was frustrating at times, but also a valuable lesson. Now the key is for Valour FC to take important steps forward in piecing together a roster for 2020.

And the boss vows his team will be physically and mentally more mature for its second campaign.

“We got bullied at times,” he said last week. “There’s no hiding behind that. At times it was boys to men… We got out-sized and out-battled on occasions and in key moments of the seasons.

“We’re in the business of winning,” he added. “As you saw with the evolution of the Bombers and our ownership there over those five-six years of how they built and stayed true to the cause, you find more characters, more players capable of winning and having that winning mentality. That’s our evolution this year.”