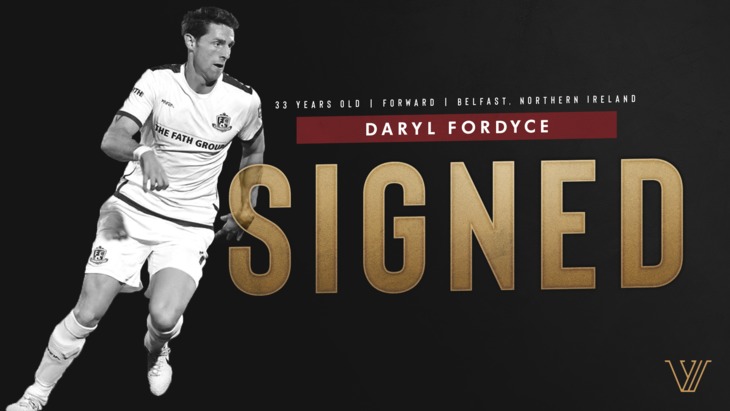 “Daryl brings a wealth of experience of playing in North America. He will add leadership and a proven attacking quality,” said Valour FC Head Coach & GM, Rob Gale. “Despite offers from Europe, Daryl showed a great desire to return to Canada and we are delighted he has agreed to join Valour.”

Fordyce started as a youth at Portsmouth (English Premier League) and after advancing to the senior squad in 2005, was loaned out to AFC Bournemouth (Football League One) the following year. After returning to Portsmouth, he signed with Glentoran (Irish League) in Northern Ireland in 2007. Fordyce would go on to make over 250 appearances for Glentoran (2007-2011) and then later Linfield (2011-2013).

In February 2013, the forward made the move to Canada and joined FC Edmonton, playing for three seasons before moving on to FC Cincinnati (USL) in 2017. After just nine appearances, he re-signed with Edmonton and finished the 2017 season amassing 32 goals through his FC Edmonton career. To this day, he remains the club’s all-time leading goal scorer.

“I’m very grateful for the opportunity that Rob, and Damian are providing me,” said Fordyce. “Throughout my career I’ve never lost any enthusiasm to help my teammates wherever I’ve been. I’m so happy and thankful to be returning to Canada with my family.”

Internationally, Fordyce has represented Northern Ireland at the U-19 and U-21 levels.