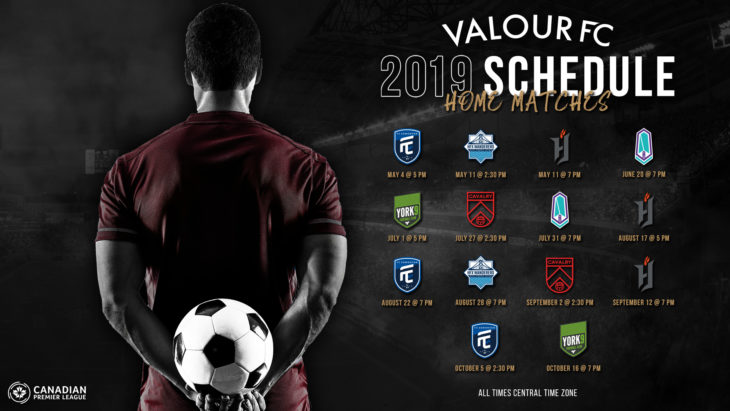 Valour FC will cannonball right into its inaugural campaign in the Canadian Premier League.

The 2019 CPL schedule was released today and Valour will open and close the regular season on the west coast against Pacific FC between May 1st and October 19th.

And what struck head coach Rob Gale instantly when he first spied the schedule’s final draft was this: with five games in 15 days to open the season, his squad will have to be battle ready in a hurry.

Valour’s first-ever game will be in Langford, B.C. at Westhills Stadium on May 1st, and will quickly be followed by the home opener May 4th against FC Edmonton, followed by a visit to Calgary to face the Cavalry on May 8th and then home dates against the Halifax Wanderers and Forge FC of Hamilton on May 11th and May 16th.

“It just heightens the need for us to have a good preseason,” Gale told valourfootball.club. “Once you get into that kind of schedule where you’ve only got two-three days before games you don’t get a lot of training time with your group. There’s a lot of recovery and maintenance and so it really stresses that our first seven to eight weeks (of training camp) will be important to instill the playing style and the concepts and that the players know their roles and responsibilities.

“Obviously there will be nuances and tweaks depending on the opposition, but we will need to get a lot of work done and be as thorough as possible in the preseason. If you’ve not been in professional football, this will really be a ‘Welcome to professional football, lads’ experience. I will say that we are pleased that in that early stretch we’re going to have three home games,” Gale added. “Hopefully we can drum up the fan base that we know is bubbling up right now and get as many people as we can out to Investors Group Field for a completely new sporting experience.

All seven CPL squads will play a 28-game regular season – 14 home, 14 on the road – and also be involved in the 2019 Canadian Championship that will feature 13 teams across four leagues: the CPL, League 1 Ontario, USL Championship (Ottawa Fury) as well as MLS sides Montreal Impact, Vancouver Whitecaps and Toronto FC.

Valour will begin play in the second qualifying round of the Canadian Championship on June 5th and 12th, lining up against the winner of the Halifax Wanderers and Vaughn Azzuri (League 1 Ontario) series. The first leg of the series will be on the road, with the second game at Investors Group Field.

Other highlights from the Valour FC schedule:

“Those two holiday games could be highlights for families,” said Gale. “I’ve always wondered when we’ve got Canada Day and we’ve got fireworks at the end of the night what we’re doing all day with a lot of things closed. Well, what a great experience to have a sporting event. As for the Saturday games… I grew up playing Saturday afternoon football. Everything was about Saturday afternoon and I think this is a great tradition that’s going to start here in the city and with the league in general. I keep saying it, but I can’t wait.”