It’s a story Daryl Fordyce chuckles about now, especially as he and his wife Tina and young son Luka have found a home here in Winnipeg.

After all, that he would end up in the Manitoba capital – let alone find contentment in this place – would have seemed so foreign to the veteran Valour FC forward just a few years ago.

“It’s amazing to think about that now,” began Fordyce as part of a recent hour-long chat with valourfootball.club. “When I was in Edmonton I played with Tyson Farago (the Winnipegger and former Valour goalkeeper). We were teammates together and are still close. I’d say to him when I found out where he was from, ‘Winterpeg? Where the hell is that? Is that where Father Christmas is because every time I look at the weather map it’s freezing.’

“Now, just a few years later I’m in Winnipeg, we’re settled here and we love the place. We’re living in Bridgewater and it’s nice. My son goes to daycare and he loves it and he’s progressing.

“What more could you ask for?”

The Fordyces have found a home in south Winnipeg, but Daryl’s Irish lilt remains prominent in his every sentence. Just for the record, Winnipeg is some 5,782 kilometres from Belfast, the capital and largest city in Northern Ireland and Fordyce’s birthplace.

His parents – John and Heather – still live in the modest three-bedroom home in the Sandy Row area of Belfast, a neighbourhood dominated by Protestants and the centre of many riots over the years as part of the country’s political, religious and nationalistic divide, referred to as ‘The Troubles.’

“It’s a very tough place, but it was normal to me,” Fordyce explained. “I had a lot of friends and there was a real sense of community. There were scraps on the street all the time. That’s everywhere in Ireland… I guess that’s why there’s a boxing club on every corner, a boxing club beside every Starbucks.”

Fordyce laughs for a moment, but the imagery he provides is both powerful and poignant. The Belfast most of us know – at least, those who have not visited — comes from what we’ve read or seen on television or in movies.

“I remember a lot of rioting going on, especially in the summer months, and a lot of divide in the city,” he recalled. “You would hear bombs go off, but because we lived right in the centre of Belfast, it was normal. I would hear the bombs and the echoes, mostly car bombs, and it was just like, ‘Oh, there’s another bomb. That seems to be coming from the north side of the city.’

“I grew up as a Protestant and obviously there was fighting going on between Catholics and Protestants but, to be honest, it has nothing to do with religion. There’s a history – Irish Catholics are fighting for a united Ireland and the Protestants in Northern Ireland are fighting to remain British. It’s not until you look outside the box at what the history actually is that you realize it’s a little bit stupid, to be honest, and there’s more to life.

“In the mid to late 90s it got really bad,” he added. “I had a person in my class whose dad was shot dead. You’d often see guys with balaclavas and with AK-47s. But where we grew up it was almost accepted because the paramilitary group were our protectors. Every other area had that, too, and you actually supported them because they were protecting us. The Catholics thought the same thing on their side.

“It wasn’t really until I went to the Northern Ireland Under-16 team — half our team was Catholic, the other half was Protestant — that you’d realize fairly quicky, ‘Hey, these guys are just like me.’ That’s when the penny dropped and you realized, ‘This is all a little bit stupid. People are getting killed for no reason whatsoever.’”

Fordyce’s father played soccer at a high level, his career ending at age 21 when he suffered a double-fracture on one of his legs. Now in his 70s, John Fordyce worked for a linen company for a few years and then began washing windows – a task he still does to this day as much for to keep busy as anything – while his mother was a typist.

Daryl credits his father for both his love and his understanding of the strategic side of the game, a skill he has already put to good use as a player and likely will do so in the next chapter of his career as a coach. 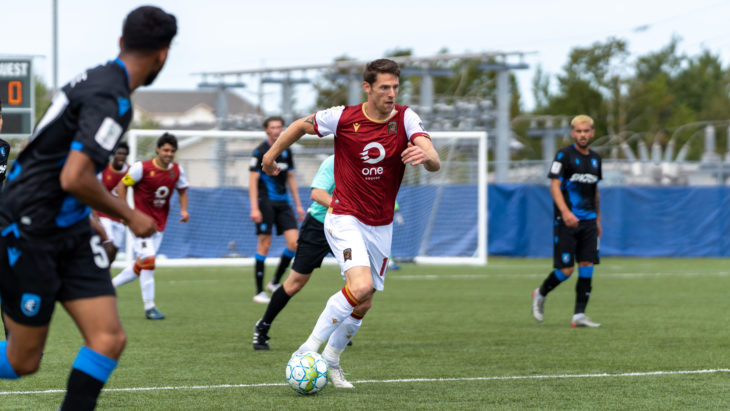 Scouted and signed at just 10 years old by Glasgow Rangers, Fordyce played year round and would be flown from Belfast to Scotland every other week to play games and train in the Rangers system. And while he would return home with Rangers track suits and gear, he still had to do chores to buy his own soccer cleats.

Fordyce proudly recalls his working-class roots and believes they served as the foundation for the man he has since become.

“We didn’t grow up with much,” he said. “I actually think it’s helped me to this day because it means whenever the chips are down I know how to respond to it as I grew up with very little. My parents always made sure me and my two sisters had what we needed.“

Fordyce headed off to England in 2005 as part of Portsmouth FC’s system and returned to Northern Ireland in 2007 with Glentoran until 2011 and then later with Linfield — the Belfast-based club that he cheered for as a youth.

It was shortly after he and Tina were married that the next part of their adventure in the game with the move to North America. He and goalkeeper Asmir Begovic – a teammate during his Portsmouth days – shared the same agent and got him in touch with Colin Miller, then the coach of FC Edmonton.

That connection brought Fordyce and fellow Linfield centre back Albert Watson to Edmonton, then of the NASL, in 2013. Fordyce would spend part of 2017 with FC Cincinnati, head back to Edmonton and then returned to Ireland and the Sligo Rovers in 2019.

It was Valour FC’s Rob Gale that brought Fordyce back to Canada in 2020.

“And for that,” said Fordyce, “I am forever grateful. You know, I can remember the day after my wife and I got married. She said to me, ‘Can you play football somewhere else?’ I was playing for Linfield, the club I supported as a kid and was still a season-ticket holder. We had just won the double – the league and the Irish Cup and so it was a dream come true.

“So I was like, ‘I’m loving it at Linfield, what’s the reason?’ But she was asking if I could play on the other side of the world somewhere because she wanted our family to have a better upbringing.

“I’m not sure all Canadians realize how good you have it here in Canada. This is a great country and I’m in a great place.”