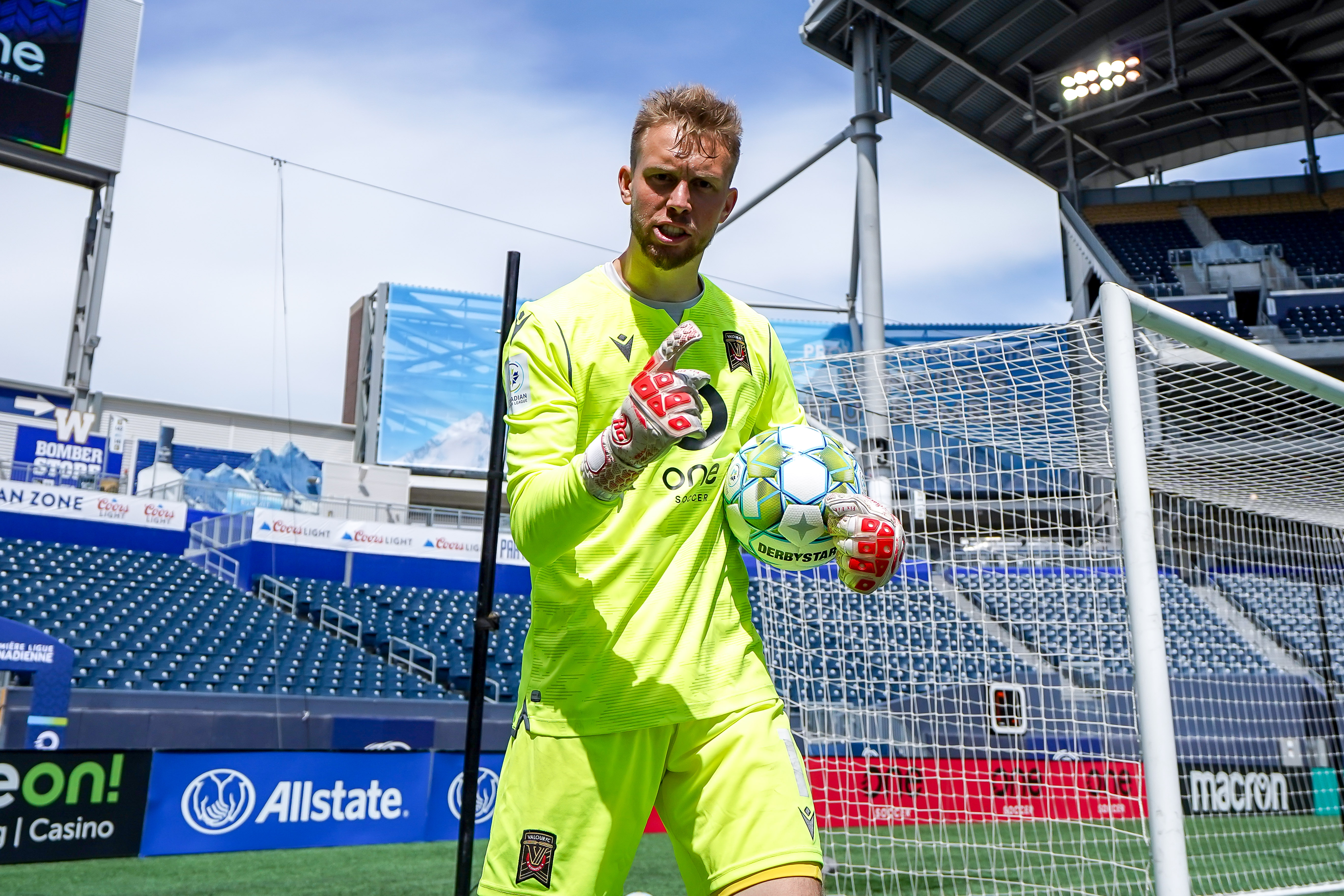 June 27, 2021. Forge FC vs. Valour. Second-Half. Goalkeeper Jonathan Sirois celebrates a 2-0 victory over Forge FC
“By being in the present and focussing on what’s in front of me right now helps me manage the situation I’m in right now. And right now it’s a lot of fun for me.”
July 15, 2021

On the day of goalkeeper Jonathan Sirois made very first start for Valour FC he not only blew out 20 candles on his birthday cake, he capped the occasion with a 2-nil win over the two-time defending Canadian Premier League champions, Forge FC.

And two weeks later, in just his fourth start, he made CPL history by becoming the first keeper to post four clean sheets in a row.

So, as debuts go this isn’t just tentatively easy into the pool on a scorching day. No, this is akin to cannonballing into the water like one of those Acapulco cliff divers.

“It’s a great accomplishment for me and I just hope I can try and continue this for as long as I can,” said Sirois in a chat with valourfootball.club this week. “But, most importantly, it’s a reward for our defensive work as a team.

“Everybody’s been putting in so much work during the games they make the job easier for me. That record is to show how much work the guys have been doing. It’s absolutely a team thing. It’s never just about the goalkeeper; it’s about the 10 in front of him.

“Every game we’ve played, whatever formation we’ve used, whatever players are on the pitch the mentality is always the same – to help each other out, to be mental monsters and try and keep that clean sheet. Everybody’s been making the sacrifices on the field to keep it like that.”

There’s a lot to like about Sirois to date, from his aggressiveness and decision making in the net to his maturity off the field. He is a 20-year-old who spits out the sound bites of a grizzled vet and is quick to praise those around him while steering the spotlight away from himself.

“We’ve been pleased with Johnny… he’s done everything you could ask of him, really,” said Valour FC GM and head coach Rob Gale. “It’s a team effort. If we keep a clean sheet that’s indicative of the 10 players in front of him as much as the play of the player behind them.

“He’s done well. He’s a mature lad. He promised us he’d come in with the presence and the maturity to be the No. 1 and compete for that spot and he’s done really well.”

A little context might be in order here: just to put Sirois’ four-clean sheets-in-four-starts accomplishment into perspective, consider that in Valour’s first season – 2019 – the team had six in 28 regular-season games. And in last year’s Island Games, James Panemis – another loan from CF Montreal of the MLS – posted two in seven matches.

Both Sirois and Gale are obviously correct in saluting those in front of him, as part of the club’s dedication to defending. Still, what Sirois is doing here is phenomenal.

“I wouldn’t have imagined the start being this great,” he said. “For sure you always dream of having a good start, maybe one or two clean sheets in a row, but I never would have thought of having four in a row, that’s for sure. It shows anything is possible, so why not push it even further.

“Performances like this give me confidence and prove that it was a good decision to come here. I sure don’t regret it. I came here to play, to get some minutes, I’m having good performances and the team is doing well. We’re top of the leaderboard now, so we’ve got to take it in and not give up and continue to work to make sure it stays that way.”

Sirois said his parents back in Quebec have been very proud of his start and have watched every minute of every Valour game since his arrival. So, too, has his girlfriend.

What he’s learned about himself over the last year has also been important. He spent last summer in the ‘MLS is Back’ bubble in Florida and has his mature approach to controlling what is in front of him has been monumental in his early success.

Maturity and self-confidence can be a powerful mix.

“They are two distinct things, but they come hand in hand most of the time,” said Sirois. “Maybe confidence isn’t something I had that much of coming into this season, but right now with all the games I’ve been playing I’m surely getting more and more confident and the guys in front of me feel it. It’s something I try to transmit, that maturity and confidence.

“I’m a day-to-day guy,” he added. “By being in the present and focussing on what’s in front of me right now helps me manage the situation I’m in right now. And right now it’s a lot of fun for me.”