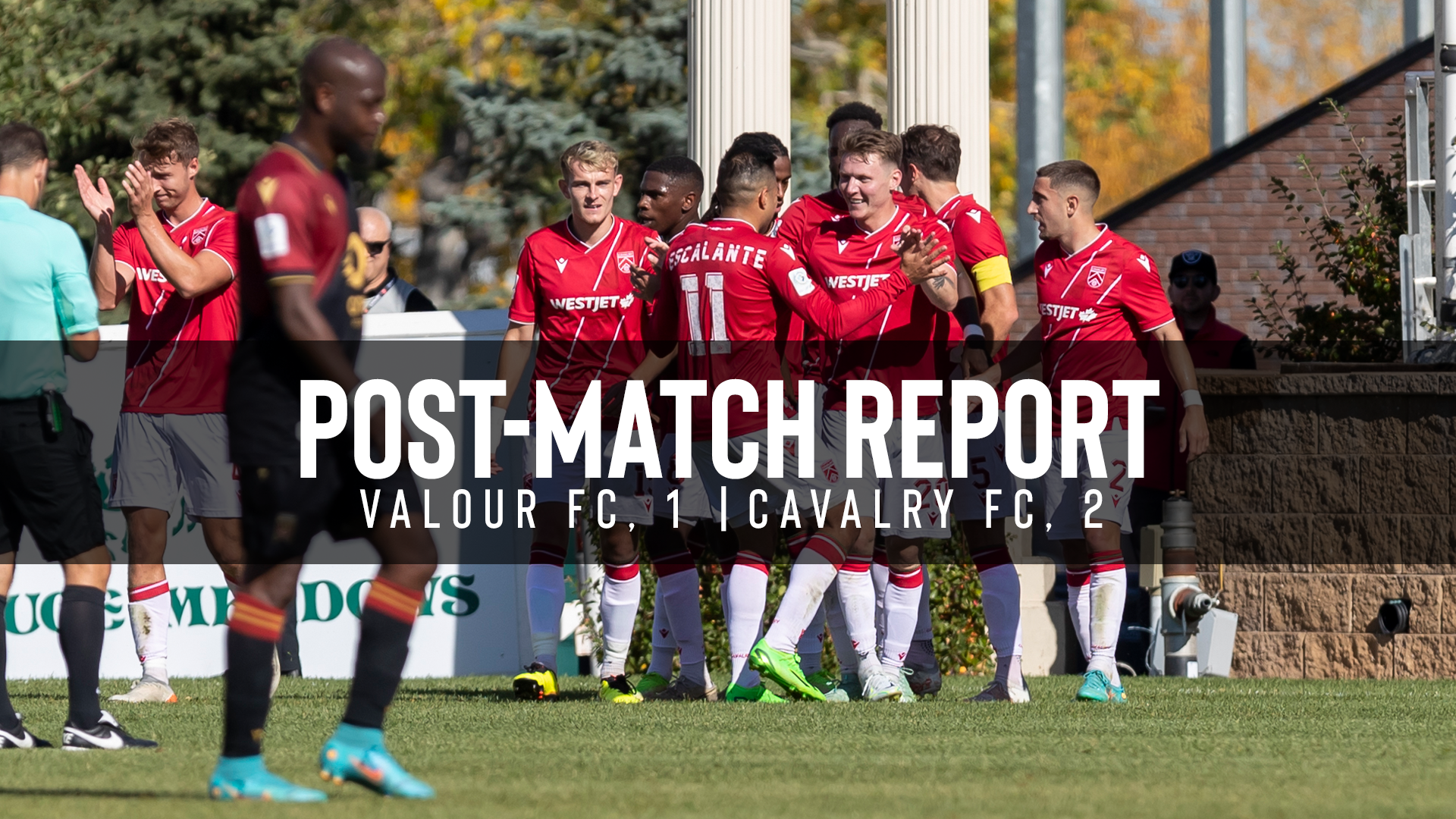 “Having to come here and fight for your life, you’re playing with fire, and we’ve played with fire the last few games.”
October 2, 2022

Cavalry FC delivered the knockout punch Sunday afternoon at ATCO Field in Calgary in a 2-1 victory that qualifies them for the postseason and makes Valour playoff spectators for a fourth straight year since the franchise’s inception in 2019.

“When we look at the reason being why we’re in this situation and playing for our lives is because there were opportunities for us to maybe secure points that we weren’t able to secure previously,” said Valour FC GM and head coach Phillip Dos Santos.

“I look back at home games that we lost points. I look back at after our two wins against Forge (on August 31st and September 4th) and going on the road for three games and starting with this one, even the game in Halifax and the game in York and not being able to secure points hurt us.

“It’s not just one game. Coming here is already hard enough. Having to come here and fight for your life, you’re playing with fire, and we’ve played with fire the last few games.”

Indeed, it was following those two wins over Forge Dos Santos referenced where the playoff dream was sunk, as the club has been winless since with three losses and a draw in the four matches after that. Valour has now lost five straight on the road dating to late July.

Valour needed a win to keep their hopes alive, but the loss drops the club to 10-7-10 – 10 wins, seven draws, 10 defeats – and essentially makes their regular-season finale next Saturday against FC Edmonton in the Alberta capital nothing but a play-for-pride match.

“We still have a game to play, and we have to embrace this game with maximum professionalism because we represent a club, an organization,” said Dos Santos. “We’re a team and the season’s not over.

“… We still have a week to work, and we still have a game to play and that’s what I told the guys. The aftermath will come afterwards. Disappointed… everyone in that locker room is. It would be weird if people weren’t.”

Joe Mason opened the scoring for Cavalry in the 39th minute, but Valour roared back with another moment of brilliance from Sean Rea, who delivered a pristine pass to Billy Forbes, before the Turks and Caicos product headed home the equalizer in the 48th minute.

GOAL 🎖@ValourFootball level things up against @CPLCavalryFC as Sean Rea gets his record breaking 9th assist of the season with a beautiful ball for Billy Forbes to head home! #CanPL | 🔴 https://t.co/7JFAUhgjL6 pic.twitter.com/z8kosnpRVN

But the club seemed to run out of gas in pressing for what would have been a critical match winner. Instead, it was former Valour midfielder Ali Musse – also assisting on Mason’s effort earlier — who delivered the decisive blow in the 81st minute with an absolute rocket into the top corner from just outside the box.

Valour will need to score twice late in the match to save their playoff hopes!

“We knew it was going to be a tight game. Cavalry is a top team… they’ve made the playoffs every year,” said Valour co-captain Daryl Fordyce. “It’s probably one of the toughest places to come to. We were a goal down at halftime, we come out sharp in the second half and get the goal back and had a beautiful chance to go 2-1 up (on a Walter Ponce attempt that went wide) and we never took it.

“As the game went on, we were hanging in there and then Ali scores a wonder goal against us. It’s fine margins. We were hoping for it to tip in our favour, but today it just didn’t.”

-Sean Rea’s assist on the Forbes goal was his league-leading ninth of the season and added to his already CPL-record setting total.

-Stefan Cebara picked up a fourth yellow and will be suspended for the finale in Edmonton next weekend.