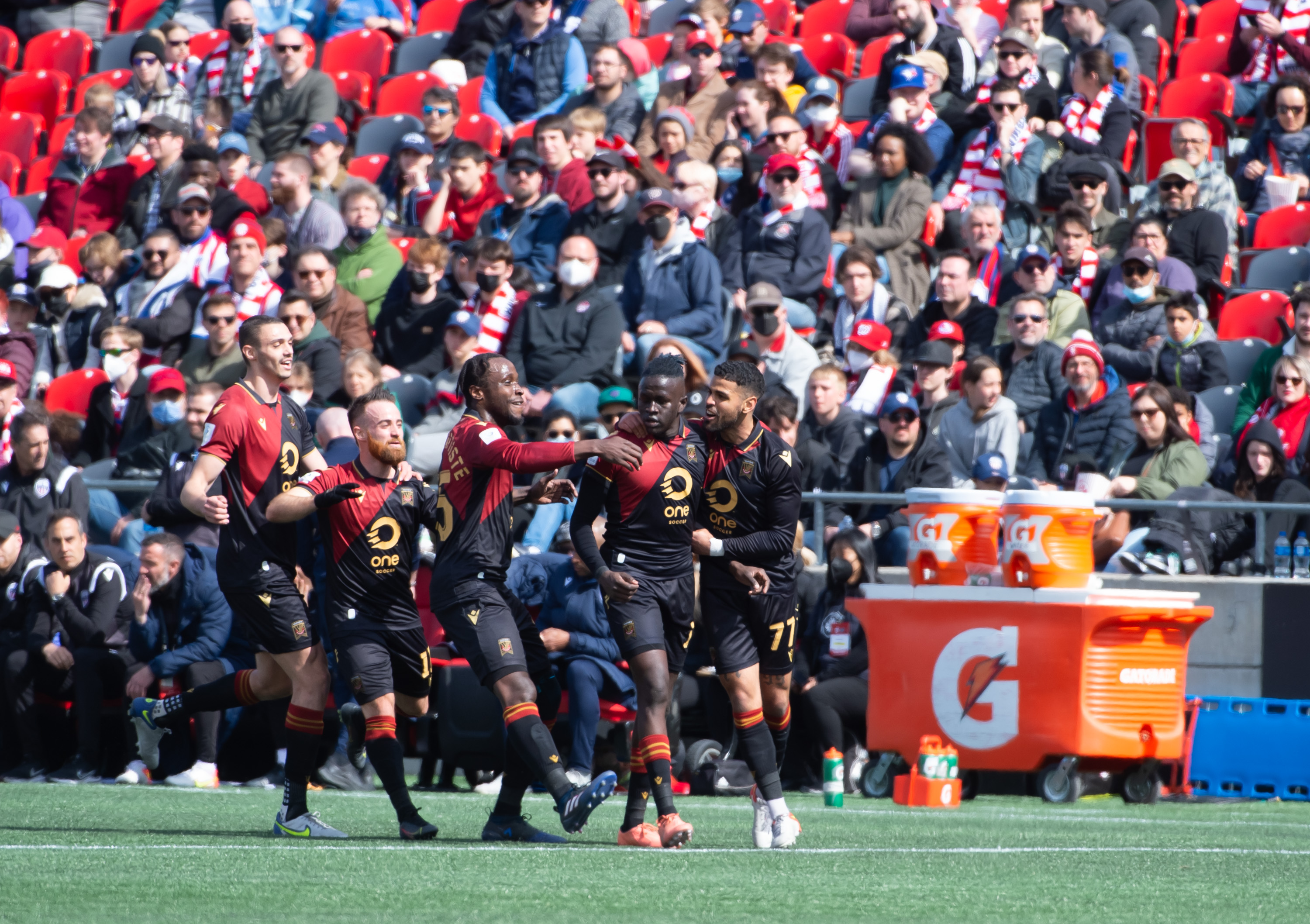 Valour FC vs Atletico Ottawa April 24, 2022 PHOTO: Andrea Cardin/Freestyle Photography/CPL
“I want to do what I did last year, plus even more.”
April 27, 2022

He was dangerous and creative whenever the ball was on his foot and threatening from start to finish in what was the most-lopsided victory in Valour FC’s history.

And while William Akio’s brilliance is not reflected on the official stats sheet from last Sunday’s 6-1 pasting of Atlético Ottawa – on the three goals he helped create he was not credited with an assist as the ball either touched a defender or the keeper first – there was little doubt of his impact in Valour’s first win of the season.

Akio was officially recognized as the Canadian Premier League’s Player of the Week and, along with four teammates – Moses Dyer, Alessandro Riggi, Brett Levis and Rocco Romeo – was part of the league’s team of the week.

With a dominant performance in his last match, @ValourFootball's @willyakio is the #CanPL Player of the Week 🌟 pic.twitter.com/Ub5xLe3c0v

“Obviously it’s nice to get personal accolades, but this was a team effort all the way through,” said Akio following training at IG Field on Wednesday. “The player of the week… all that stuff is just us proving to everyone else that we’re a good team.

“Unfortunately, I didn’t get the assists but at the end of the day everyone who watched that game knows I played well, and I helped the team. That’s all that matters.”

There’s a maturity in that answer that speaks volumes of Akio’s growth even in one year with Valour FC. He arrived last year after a superb college career at the University of Texas-Rio Grande and progressed in front of everyone’s eyes with eight goals and three assists in his first year as a professional – five of those goals coming in the last six matches. That production also helped earn him his first call up to the South Sudan national team, and he made his international debut this January.

Already this season he’s been asked to drop back and play fullback in the second game after Tony Mikhael was red-carded and has still been able to flash his skillset up and down the right side.

“I’ve been happy with how I’ve played,” Akio said. “This last game I felt comfortable. Unfortunately, I didn’t get the goal (he hit the woodwork in the 39th minute) – it’s always nice to get rewarded with a goal as a forward – but we’ll just go again this week. The goals will come.

“Last year, there were lots of ups and downs coming into the pro game. I was very nervous all the time, every day in training and in games. Now I’m starting to get more comfortable. I’ve given myself after that first year some reassurance that I’m a good player and can play at this level. I’m very comfortable and now I’ve just got to keep going.”

Critical in his further growth is how Akio handles the expectations placed on him by GM and head coach Phillip Dos Santos and the Valour coaching staff. They see the potential in the 23-year-old and will continue to push him.

“I’ve mentioned before that I thought he had another gear in him,” Dos Santos said. “Yes he did well previously, but he wasn’t at the level we know Willy can be at. It wasn’t always clean and on smaller fields it’s harder for him to sometimes find the game.

“But there’s been maturity along the way. He embraced the role when we asked him to come back (to fullback). Willy’s a pro and because he’s a pro he’s going to do what it takes for the team. That’s the most-important thing.

“I’ve told him, ‘If you do the little things we ask you to do and commit to them, the goals, the assists are going to happen organically.’”

And if Sunday’s win over Ottawa is Akio’s new template, those expectations are not just those held by the team, but by the player himself.
“That’s what I’m really focussing on now: there’s going to be ups and downs this year, but I’m working on controlling on what I can control. And whatever I can’t control I have to let it pass, let it ride,” said Akio.

“I want to be effective every single game. I want to help my team out with points – assists, goals – and I just want to level up again. I want to do what I did last year, plus even more.”

‘V’ NOTES: D Andy Baquero, MF Diego Gutiérrez, D Andrew Jean-Baptiste and FW Alessandro Riggi did not practise on Wednesday. Dos Santos said Riggi and Baquero should be good to go for Sunday’s home opener at IG Field against Forge FC, while Gutiérrez will need one more week to recover from his hamstring. The status of Jean-Baptiste and the timetable for his possible return from his hamstring injury is still to be determined.