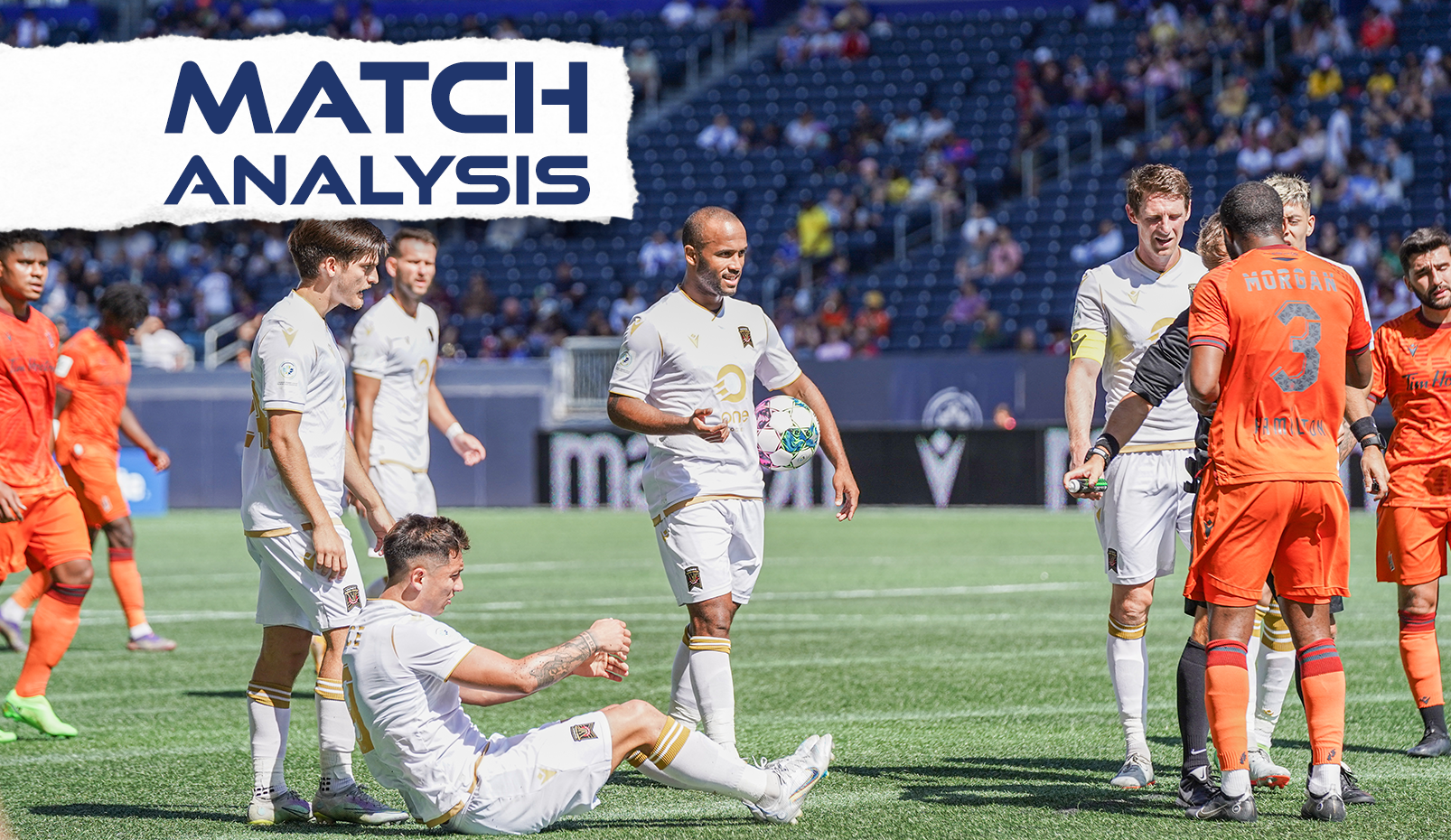 Valour FC moved above the playoff line after their second straight 1-0 victory over Forge FC this week. Brett Levis scored the lone goal of the match after drifting in from the left flank and playing a brilliant one-two with Valour captain Daryl Fordyce.

The two clubs are now tied on 36 points in the Canadian Premier League standings, with Forge still sitting a spot higher in third because of their goal difference.

Valour and Forge appear to be heading in different directions, however, as Forge has lost four of their last five. Valour, meanwhile, picked up their third straight clean sheet, all of which came against playoff contenders, and have now won five of their last seven, losing just once during that impressive stretch.

It was unquestionably the most impressive week in the history of Valour football club, as they left no doubt that this is now a five-horse race for the Canadian Premier League’s four playoff berths.

After losing star player William Akio mid-way through July, and then failing to win any of their next three matches, all against top four sides, it looked like any hope of postseason football in Winnipeg was slipping away.

But having now won five of seven, including the two wins over Forge this week and victories over Pacific and Cavalry in August, Valour has made an improbable climb up the league table.

“We’ve worked very hard to get ourselves back into contention for the playoffs,” said club captain Daryl Fordyce. “That was one of our goals at the start of the year, and a few weeks ago you could say we were out of it. But we’ve dug in, we’ve got ourselves back into a good position.”

After missing out on the playoffs by just a single point last season, however, nobody inside the Valour room will be under any illusions that this is “job done”. Now that they are finally above the playoff line, the mentality now shifts to staying there.

But with five matches remaining, that task certainly won’t be easy. They only have a single home match remaining during that run and come up against fellow playoff hopefuls Cavalry FC and Atlético Ottawa during that stretch.

“I challenged the guys to protect the progress that we have made, that is the most important,” said Dos Santos. “Once you are above that line, we have to do everything to try to stay there and it starts with next weekend.”

With the way Valour was able to claw out results over the past few weeks, however, all of which were well deserved, it is hard to bet against them continuing in this run of form.

For the second straight match, Valour not only defeated but also shut out the league’s highest-scoring team. After scoring early and then locking up shop on Wednesday, they took a more active, and ultimately even more effective, defensive approach today.

Part of that was to take a page out of Forge’s book and “defend with possession”, making sure that they were on the ball lot more and not just letting Forge dictate the tempo of the match. This was especially effective in the opening half, where they had 57 per cent of the ball. While that dropped to 47.1 per cent by full-time, it was still far more of the ball than the 39.3% they managed mid-week. They also made only 15 defensive clearances compared to 22 on Wednesday, showing a greater commitment to maintaining possession.

It wasn’t always effective, as Valour did lose the ball in some dangerous areas during the match when perhaps holding onto it for too long. But especially in the first half it really didn’t allow Forge to have the usual long spells of possession that are so key to their team identity.

“Our guys read the situations well, they were again colossal in the way they committed to their defensive actions,” said Dos Santos. “I think that on the ball, at halftime the possession was ours considerably. For me that was important. Yes, defend well but try to have the ball so that we have to defend as little as possible. When we do have to defend, defend as high as possible with players around the ball and make sure that we have a strong offensive marking with our centrebacks being courageous and not allowing Forge to come out with fast transition. So I think that we did a lot of those things well.”

The graphic below shows the defensive actions of Valour during the match, including just how high up the pitch they were able to consistently win back the ball and disrupt Forge in possession.

Valour also did a tremendous job of picking the right moments to attack the Forge ball carrier. They sat back and were well organized for large stretches, only to pounce on an errant touch or loss pass when they had the numbers and protection to do so.

“If you don’t get your press right, they can certainly open you up and hurt you,” said Fordyce. “In the last two games, we’ve been quite solid. I thought today in the first half we actually took care of the ball a bit more, we actually out-possessed Forge in the first half. But whenever Forge did have the ball, we knew our roles, we knew our responsibilities and we fought for each other, we covered for each other and that was important.”

Forge struggling for answers after yet another match without a goal

It has now been 308 minutes since Forge last found the back of the net, far and away the longest stretch in club history. After their third straight match without scoring, Forge return to Hamilton with plenty of questions as to how to get back to the form that has seen them score a league-high 40 goals this season.

The chances haven’t been there either, as this is the sixth straight match that Forge has generated lower than one expected goal. They had just 0.34 today, and despite nine attempts did not register a shot on target.

Asked what has gone wrong offensively for his side of late, Forge head coach Bobby Smyrniotis didn’t have many answers, but knows improvement has to come quickly.

“I don’t know because it has come to a point where we have been scored on and then we start showing a forceful effort to get to the opponent’s goal,” he said. “Why before that? I’m not sure that’s a discussion we have to ask with the players but we had circumstances in the game where we could be there, we could do the right things and we just aren’t doing it. That’s where we aren’t clicking right now as a team. We started the game with about 30 goals on the pitch between the players that were there, so it has got to be better.”

The old adage about games in hand only being valuable if you can win them has certainly been proven correct with Forge, as they now sit just a single point into the playoffs, with the same amount of games played as fifth place Pacific. Any margin for error that previously existed is quickly disappearing for the Hamilton side.

“We’ve given up a great opportunity with some of these games in hand that we had to pull ourselves a little bit apart from everyone. Now everyone is in the same tact, everyone is playing themselves at one point or another and games are important. So it is going to be quite exciting for the neutral as we get into this next stretch of games.”

The Valour fullback was already a deserving player of the match before he scored the game’s lone goal in the 73rd minute. Levis had the most touches of any player on the pitch with 84, won possession back a stunning 11 times, including 5 interceptions and three tackles won. He set the tone for the Winnipeg side throughout the match.

Watch all matches live on OneSoccer. In addition to its website and app, OneSoccer is now available on TELUS channel 980 and on Fubo TV. Call your local cable provider to ask for OneSoccer today.