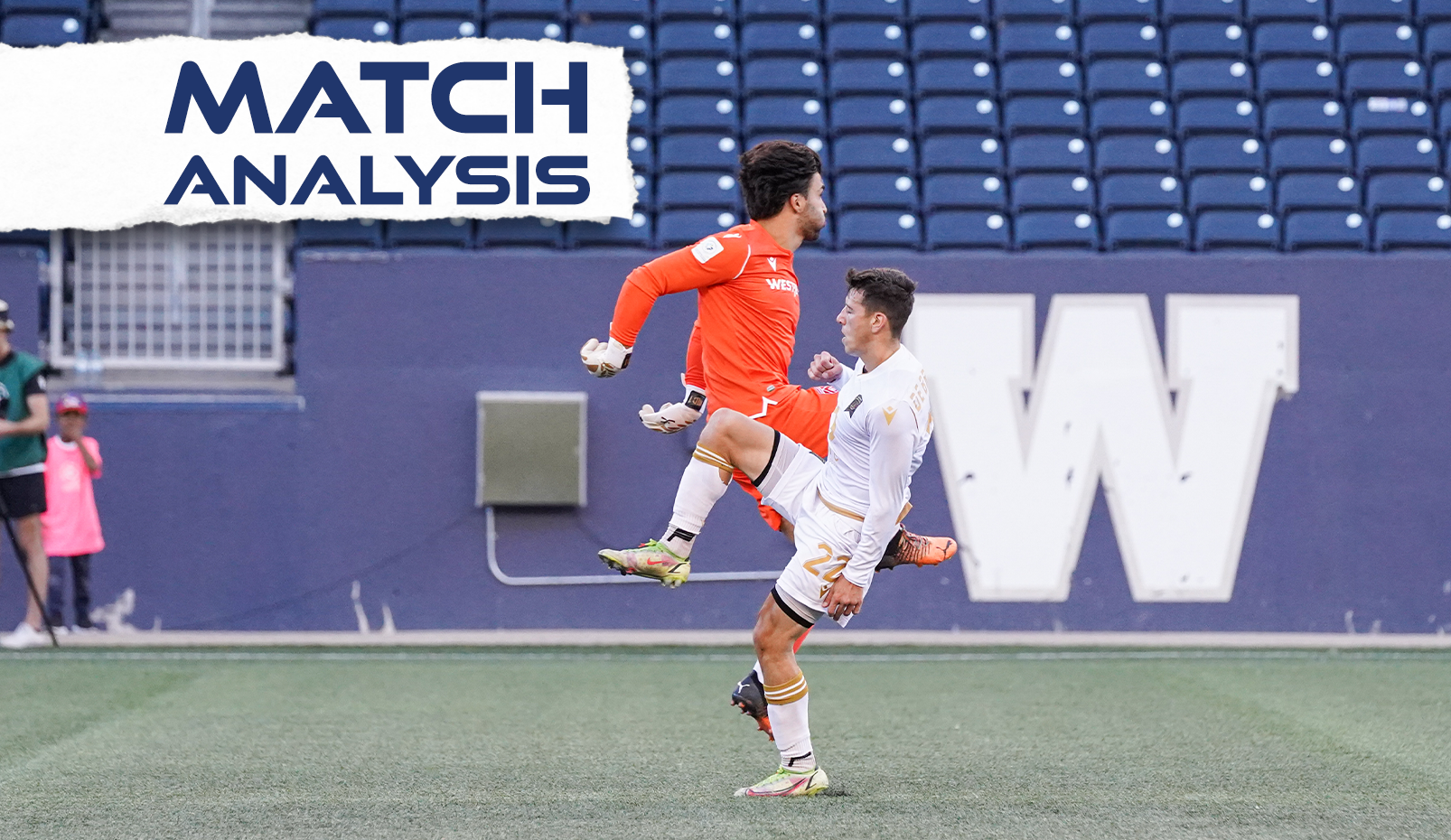 Moses Dyer scored both goals for the Winnipeggers, starting with a seventh minute lob over the head of Cavalry goalkeeper Marco Carducci. He added some insurance in the second half, making a great run through the Cavalry backline, rounding Carducci and putting the ball into the empty net.

With the win, Valour are just four points back of Atlético Ottawa for fourth place, with both teams playing matches this weekend. Cavalry hang onto third place, but with four losses from their last five matches, need to start picking up positive results again.

After letting a dominant performance slip away from them on the weekend against Pacific FC, it was no secret that Valour wanted to respond in a big way, and they couldn’t have asked for much better than a victory and clean sheet against a team that they’re chasing in the standings.

Moses Dyer scored twice, putting himself on nine goals this season, four back of Alejandro Diaz’s tally of 13 in the Golden Boot race, and even with Woobens Pacius of Forge FC in second place. He was suspended for that match on the weekend, and said after Wednesday’s contest that he was happy to respond in a big way on a personal level as well.

A strong defensive performance was also needed after a shaky end to the aforementioned match against Pacific, and that’s exactly what the group of Andy Baquero, Andrew Jean-Baptiste, Nassim Mekideche and Brett Levis provided.

It was by no means the perfect performance, they let a few chances go unscored, and could have been a bit tighter at the back at times, but overall it was the kind of performance that a team looking to climb up into a playoff spot needs.

The match was also a milestone for Valour goalkeeper Rayane Yesli, who picked up his first win and clean sheet in the CPL. The 22-year-old made three saves on the night, including a diving catch to deny a header from Joe Mason in the first half.

It was a rare opportunity for Yesli, who has been the backup to arguably the best goalkeeper in the league in Jonathan Sirois, and as a result limited to just a handful of starts. Despite that, a proud Phillip Dos Santos said after the match that they think very highly of Yesli and know that they can trust him.

“I said it in the beginning of the season, that there was a chance that we have the best duo of goalkeepers,” said Dos Santos. “There are moments in the season where a goalkeeper needs to breathe a little bit, if they start making a mistake here and there, and it’s good to be able to make a change and trust a guy like Rayane.

“He has a lot of potential, a lot of good tools, he has a frame that is second-to-none in the league. I think he’s a player that we trust a lot, so we’re happy for him, happy to see him step in and have a solid performance. What you ask of goalkeepers is that they’re present when asked to be present, and that’s what Rayane did.”

A first #CanPL win and a clean sheet for @ValourFootball's @yesli99rayane earns him the @AllstateCanada Save of the Match 👏#CanPL | 📺: @onesoccer pic.twitter.com/4jnOQiL0j9

Cavalry “letting teams beat us, and giving them gifts” in frustrating match defensively

Over the past few seasons, Cavalry FC has been a very strong defensive team, and have some of the most dominant defenders in the league in their squad, but have recently been in a poor stretch of form. They have lost four of their last five matches with Wednesday’s defeat in Winnipeg, being outscored 8-3 in that span.

Against Valour at IG Field on Wednesday it was again a case of a couple of errors in key moments that sunk them, as both goals are ones they would normally be expected to prevent. Head coach Tommy Wheeldon Jr said as much after the match, saying that an uncharacteristically poor defensive performance is “not like us”.

On the first goal, a breakdown in communication between Karifa Yao and Marco Carducci is what let them down, as neither one took charge of a ball over the top from a Valour player, allowing Moses Dyer an opportunity to calmly lift the ball over Carducci’s head just seven minutes in.

Make it 1-0 for @ValourFootball who are off to another great start at home against @CPLCavalryFC!

Can they hold on👀

Carducci dealt with another similar opportunity later in the half, in which Matteo de Brienne was charging after a ball over the defence, but this time the Cavalry goalkeeper came out of his net to clear away the danger.

On Dyer’s second goal in the 72nd minute, an old demon haunted Cavalry again — the hesitation to play to the whistle. Alessandro Riggi’s pass to Moses Dyer split two Cavs defenders, and believing that Dyer was offside, both were caught flat-footed as they looked for the ref to call it back.

By that point Dyer was through on goal, and he would round Marco Carducci before putting the ball into the now-empty goal. A goal down with 20 minutes to play is something that Cavalry could back from — Pacific did so against Valour just a few days earlier — but the two-goal deficit gave Valour some breathing room.

A DOUBLE FOR DYER🔥🔥

A HUGE goal for @ValourFootball as they go up 2-0 late against @CPLCavalryFC! #CanPL | 📺: @onesoccer pic.twitter.com/mM405aEyhN

“I haven’t seen it back,” said Cavalry captain Mason Trafford, who said that he thought it was offside in the moment. “It felt like it was, but that’s no excuse, we shouldn’t stop playing. We need to play to the whistle, we know that.”

Wheeldon Jr said after the match that he didn’t actually see the second goal live, he was preparing to bring Bradley Vliet off the bench for Jose Escalante, but said that defensive mistakes are things they can work on.

“We’re letting teams beat us, and giving them gifts, and we’re having to find the hard way to score,” he said. “These are fixable problems on the training ground, we’ve just got to have the resilience to do so.”

With over a week now until Cavalry play next — a home game against Forge next Friday — both Trafford and Wheeldon Jr emphasized after the match that a positive response is needed for them to get back to winning ways.

Despite only joining the team less than a month ago, Nassim Mekidèche has made an immediate impact on the Valour backline. Needing some centre-back depth, Phil Dos Santos brought the 22-year-old back to Canada after stints in Algeria and Tunisia.

Mekidèche made his third appearance for the club in Wednesday’s match against Cavalry, and his second start — making his first on the weekend against Pacific FC. In that match, despite Valour being on the wrong side of a frustrating 2-1 result, Mekidèche had played a huge role in limiting the effectiveness of an attack that included Alejandro Diaz and Marco Bustos, among others.

He’s a commanding physical presence, with centre-back partner Andrew Jean-Baptiste calling him ” an absolute monster” after that Pacific game, and that saying that he’s “running the show” in training and has already built a strong chemistry with the squad. For a team that has looked shaky at the back in some games, but is yet to be truly blown out in a game, it’s a welcome addition that has clearly been an upgrade.

Mekidèche was good again against Cavalry, leading his team with six interceptions, six aerial duels won and four clearances. He’s shown signs of being a shutdown defender, but has also shown an ambition to help out the team’s attack, by playing forward passes.

An example of that can be seen on Valour’s first goal on Wednesday. The centre-back lofted a pass down the pitch, forcing an error at the back from the Cavalry backline which Moses Dyer took full advantage of. It was Mekidèche’s first assist in the Canadian Premier League, and it would be the winning goal.

Make it 1-0 for @ValourFootball who are off to another great start at home against @CPLCavalryFC!

Can they hold on👀

There’s a lot to like about him, so if he can build on a strong start to his time in the CPL, Valour may have found another Canadian hidden gem.

Valour’s leading scorer added two goals to his tally on Wednesday night, a pair of well-taken finishes that brought his season total up to nine.

Watch all matches live on OneSoccer. In addition to its website and app, OneSoccer is now available on TELUS channel 980 and on Fubo TV. Call your local cable provider to ask for OneSoccer today.