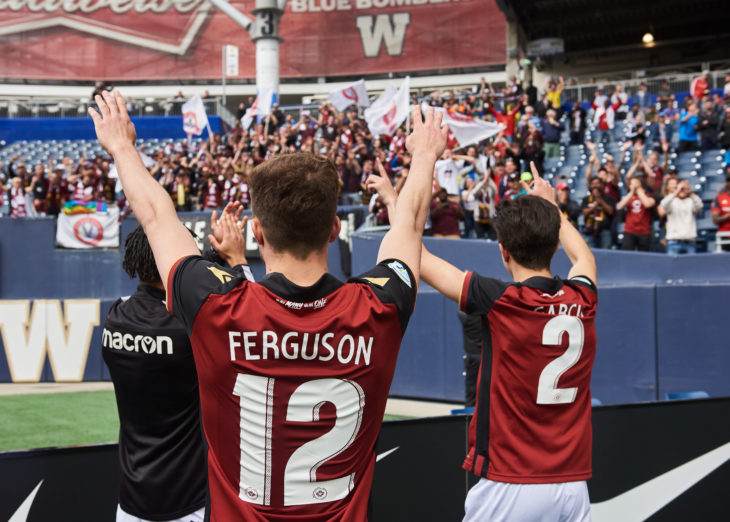 The Valour FC record books will mark the day as a momentous occasion for the Canadian Premier League squad and the first home win in its young history.

That much was evident as the Valour FC troops left IG Field following a 1-nil victory over the HFX Wanderers in front of 5,819 on a sun-soaked Saturday afternoon.

Not surprisingly, there were celebratory hoots and hollers, as players and coaches alike spoke of building IG Field into a ‘fortress’ and the result was especially important following a 2-1 home loss to FC Edmonton in the home opener a week ago and last Wednesday’s 1-0 loss to Cavalry FC in Calgary.

What the record books won’t detail, however, is the emotional and physical wringer Valour FC has just survived, having emerged from a stretch that saw them play four games in 10 days to open their CPL campaign, including visits to Pacific FC in Victoria and then Calgary.

Asked for his assessment of the first 15 days – what had he seen, what he would like to see more of – Valour FC GM and head coach Rob Gale cracked: ‘Sleep.’

“In all seriousness, I like the way we’ve played,” said Gale. “We’ve shown what we’re about in terms of identity and trying to play football. I like the fact that we’re trying to be positive and win every football game. You haven’t seen a game where we were trying to clog it up and not go toe to toe with the opposition.

“It hasn’t always gone in our favour… we could be sitting here on 10 points, we’re on six (with a two-wins, two-losses record now) and that’s the reality of it. I’m happy with my boys today and how they dug in after a tough stretch. And the supporters culture and the feeling around the ground and what’s happening is very exciting because I think it’s just going to get bigger and bigger.”

That big-picture analysis aside, what happened in the match was critical in showcasing Valour FC’s depth. Gale made six changes to the lineup, giving Winnipegger Marco Bustos his first start, along with goalkeeper Mathias Janssens, Raphael Garcia and Calum Ferguson.

Bustos was superb in his Valour FC debut in front of about 30 friends and family; Janssens stopped three shots for the club’s first clean sheet; Garcia was steady, and Ferguson scored the match’s only goal in the 48th minute, capping a solid run by Ali Musse.

“During the week against Calgary it was a physical battle and the pitch wasn’t the best, but when we can get the ball down on our surface on our home patch and play our style of football that Rob’s got us playing, I think we’re a hard team to play against,” said Ferguson. “Hopefully we can turn this into a fortress and teams won’t like coming here.

“And Rob’s got faith in every one of us to go out there and do a job. It’s a vital part of what we’re trying to do here.” 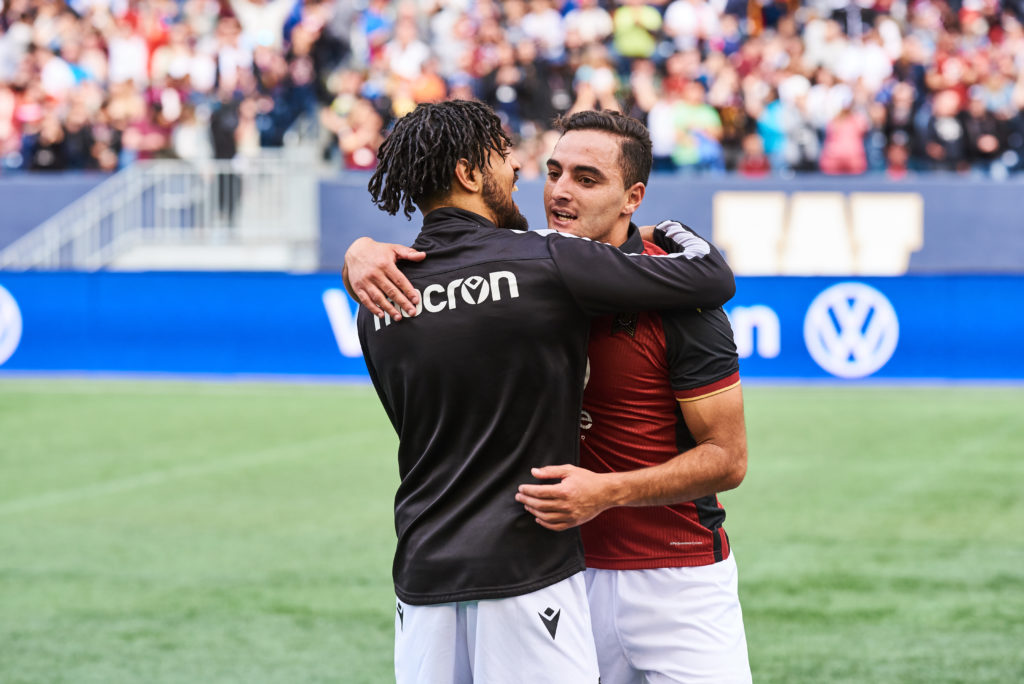 Bustos was all smiles after the victory, which was a special one with so many fans in the crowd.

“That was great. The fans showed up and that’s what we need as a professional football club” said Bustos. “When the fans come out it’s about them and I’m just glad I got to be a part of the first win here. It’s been definitely a busy week and I’m just glad I was on the pitch to help the team win.

“Getting the three points here at home and seeing the fans cheer at the end when the ref blew the whistle was a dream come true, for sure.”

The crowd was solid again, after close to 10,000 were in attendance in the home opener and near 6,000 in this one. And Gale was quick to acknowledge the Red River Rising supporters group that owns an entire section known as ‘The Trench.’

“The fans… the last 20 minutes I sat there on the bench going, ‘I’m in my hometown in Winnipeg here and those fans were amazing.’ They were bouncing, they kept us going. They kept me energized on the bench and I was looking at the team and we needed the legs… they were brilliant today. ‘The Trench’ – full shout-out to everyone in there. And hopefully, all the mums in there bouncing up and down, downing pints, have a good Mother’s Day tomorrow.”

Valour FC was without Josip Golubar and Michael Petrasso, while Adam Mitter had to leave in the first half after suffering a shoulder injury.

“Shoulder came out and popped back in… so unless he is Mel Gibson in Lethal Weapon he’ll have a little bit of time on the sideline,” said Gale. “Mikey P was rested as a precaution today. He trained yesterday and I think he’s going to be fine. Josip is going to see a doctor on Monday and get a scan on his knee.”