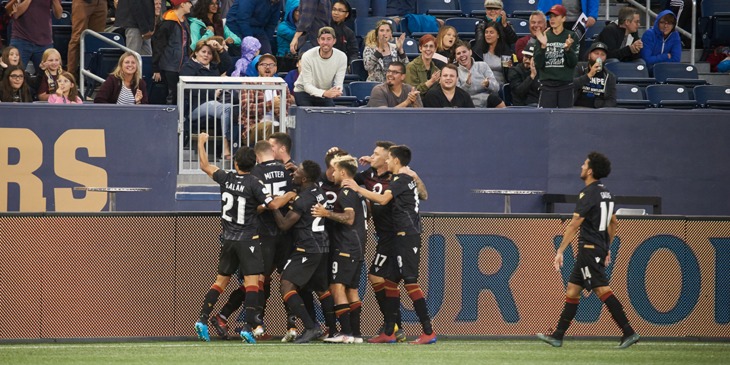 It is a magical and fantastical formula – a clean sheet for the goalkeeper, a valiant effort from a reconfigured back line and two goals from a local product – that made for a storybook-like night for Valour FC.

Marco Bustos scored twice in a three-minute span early in the second half, in the 47th and 50th minutes, and Matthias Janssens authored a shutout behind some solid work from Raphael Ohin, Adam Mitter and Yohan Le Bourhis as Valour FC knocked off the HFX Wanderers 2-nil in front of 4,346 at IG Field Wednesday night.

The win was Valour FC’s third in their last five matches and moves them into fourth place in the Canadian Premier League standings with a 3-4-3 record. Just as important, it ends a drought against the Wanderers, as Valour FC has played them six times now including the Canadian Championship and after winning the first, had been defeated four matches in a row, including going goal-less in the last three meetings.

“We’ve lost to these guys I can’t even remember how many times in a row and we came out here with the mentality that we weren’t going to lose,” said Bustos, who now has five goals this season.

“That’s one game, but we need to bring it every single game. And now looking forward to Monday’s game and Cavalry… why can’t we do it to them?”

And as good as Bustos was with his finish, the defending by the entire collective was massive in the victory.

“That’s one thing we said in the build-up to this game – we’ve leaked goals against this team and it was imperative to keep a clean sheet,” said Mitter, who picked up a yellow card and was later replaced by Skylar Thomas in the 77th minute. “I thought the two guys next to me, the goalkeeper and the lads in front of me were absolutely fantastic today.

“Sometimes it just clicks and tonight was one of those times. We worked for each other on and off the ball and, to a man, they were superb.”
Janssens picked up his fourth clean sheet in 10 matches and the young Belgian continues to improve with every minute.

“He was fantastic again, wasn’t he?” said Mitter. “Since he’s come in he’s been absolutely brilliant. He’s shown his worth and he’s still a young lad, so he’s only going to get better.”

“It’s a team, everybody did their job and worked 100 per cent and this is a victory for the entire team,” said Janssens through his interpreter, Valour FC goalkeeper coach Patrick Di Stefani. “In football there’s injuries and the people who are getting on board got their chance and did their job.”

Valour FC is home again on Labour Day Monday, in a match against Cavalry FC of Calgary.

“That was a really full performance,” said Valour FC assistant GM/coach Damian Rocke. “It wasn’t perfect, but it was a really sound performance. Going back to previous games we’ve had that in large spurts, it’s just putting it together in 90 minutes.”

Asked if he thought Valour FC has turned a corner given the recent results, Rocke offered this:

“I would say so. While we’ve spoken at length about us being positive as a staff and truly believing in the qualities of the team and getting things right and moving in the right direction, we’ve gotten results and that’s the difference now.

“I believe it’s turned into something feasible. We’re obviously pleased with the players. They’ve put in the work, they’ve gotten over that mental hurdle of actually believing they belong where they are… it’s not going to continue. There’s no straight trajectory, but it’s obviously important to get that result.”