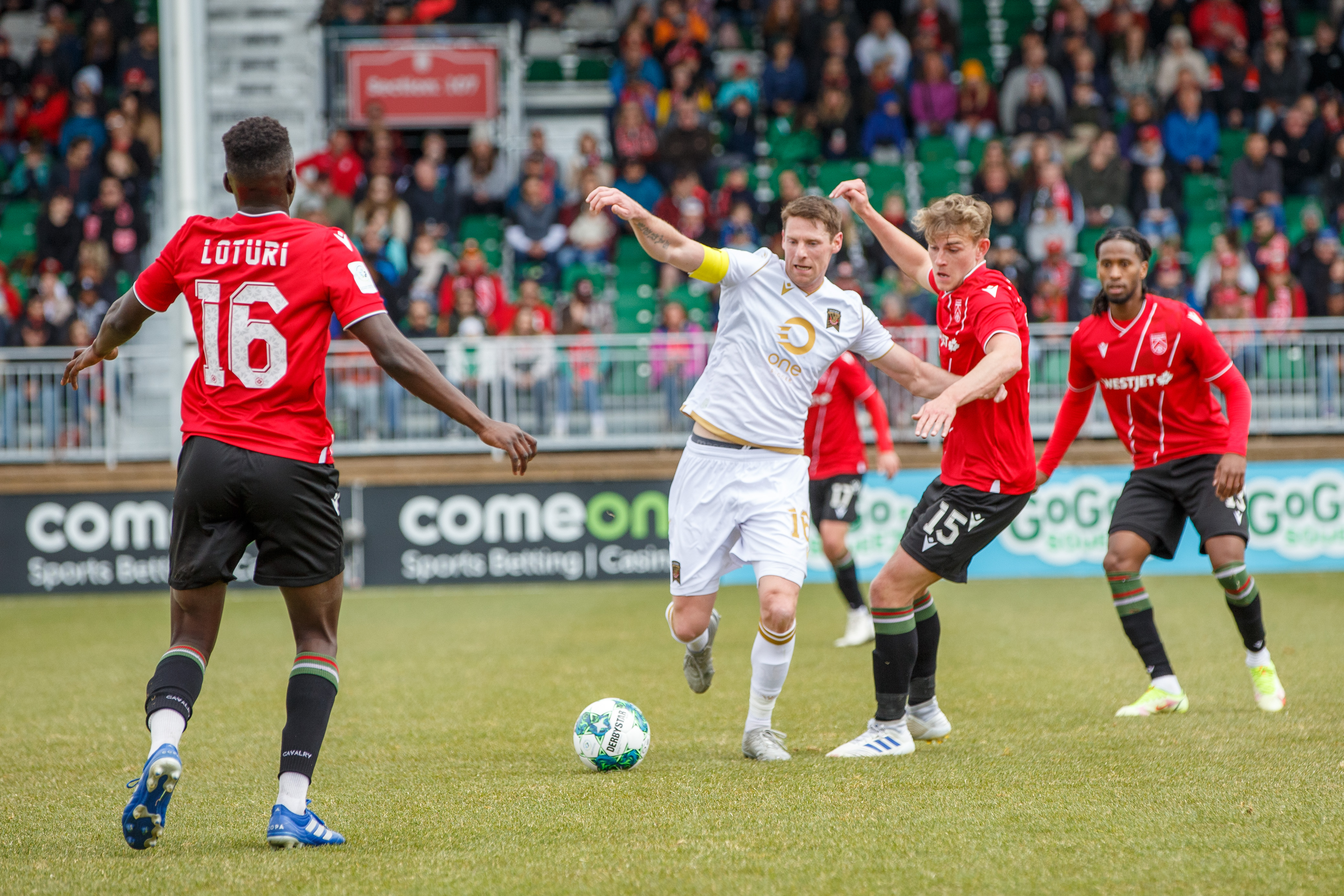 Cavalry FC vs FC Edmonton at ATCO Field, Calgary, Alberta, Canada - May 21, 2022 CFC Media/Tony Lewis
“Mentally or emotionally we have to move on. These are mountains we have to climb in the season.” | Valour FC 1, Cavalry FC 2
May 21, 2022

The hardest lessons to learn in sports are often the most painful.

And Valour FC is hurting today.

Winnipeg’s Canadian Premier League side fell 2-1 to Cavalry FC Saturday afternoon at ATCO Field in Calgary in a match in which they gave up a late goal, rallied to tie it with one of their own only to have their hearts broken by surrendering the winner two minutes into extra time.

So what could have been a valuable road point is instead a point lost, after Elijah Adekugbe buried the winner behind Jonathan Sirois in the 92nd minute – just over three minutes after Stefan Cebara had tied the match with a header in the 89th minute.

“I don’t take moral wins,” said Valour GM and head coach Phillip Dos Santos. “It was a game that we fought hard, I can’t take that away from the guys. It was very, very even for large parts of the game. Of course, when you come here and play against a good team they’re going to have moments where they push you back a bit – that’s part of the game and we know it’s going to happen. We came prepared for that.

And we need to experience these things to learn from them and that’s my biggest message and I told my bench that as soon as it happened. There’s things you absolutely need to experience if you want to grow as a team and it’s unfortunate we didn’t get the result.”

The loss drops Valour’s record to 2-2-2 and out of a tie for second place in the standings. Cavalry, meanwhile, improves to 3-2-2.

“This is not a sprint and there’s a lot of good things we take from the game,” Dos Santos added. “We need to keep working and minimize the errors that are putting us in trouble when the opposition does get a chance.”

After a solid opening half, Valour was under attack but holding in the second half when all heck broke loose with three goals in the final eight minutes. Cavalry got its first when Diego Gutiérrez was called for a foul on Charlie Trafford in the box, leading to a penalty by Myer Bevan.

Sirois stopped the penalty – his fifth stop in six chances in his short CPL career – but before Valour could get back to defend Bevan buried his own rebound.

Valour rallied with some late-match magic of their own as Moses Dyer flicked on a corner kick from Gutiérrez, which was then buried with a header by Cebara.

Yet – as was the case in the season-opening 1-1 draw against FC Edmonton – Valour couldn’t seal the deal in the waning moments.

“Full credit to Cavalry,” said Valour captain Daryl Fordyce. “They came out in the second half and pinned us back for most of the second half, but our boys dug in. We’ve just got to learn from it. A little bit more experience just to clear the ball and take the point. It wasn’t a day.

“This is one of the toughest places to come in the league, for sure, and not many teams come here and take out points. I thought we defended pretty well today, especially in the first half where we didn’t give Cavalry very much. Then we gave away a penalty and switched off for the second goal, but overall I thought we defended pretty well. We looked quite comfortable and just switched off on the last play.”

Valour will return home for training this week before heading out on the road again next weekend with a visit to CPL powerhouse Pacific FC.

“They can’t be affected by this. This is a game,” Dos Santos said. “There’s a lot more to come. If we were affected by this going into the week and with what we have to do or next game, we have a problem. This is one of those you look at and there’s a lot of positives to grab. We work and we make sure we’re ready to go next week because we have another very difficult game on the road.

“Mentally or emotionally we have to move on. These are mountains we have to climb in the season. Like I said, sometimes teams need these moments in order to grow and move on and keep pushing forward.”

-Jacob Carlos started in the midfield for Valour, as Sean Rea was not available due to a non-COVID related illness.

-Forward Walter Ponce made his Valour and CPL debut, coming into the match in the 79th minute.

“People keep asking me about it. It’s not like there’s a secret or there’s magic or anything. He reads the situation like a forward who finds the spaces in the box and scores.

“He’s just good at what he does. It’s good to have him on our side. That’s a small moral victory in the middle of everything. It’s good. It’s good for him. Above all he’s a great guy, a great professional to have in the locker room and hopefully he’ll keep doing these things for us throughout the season.”