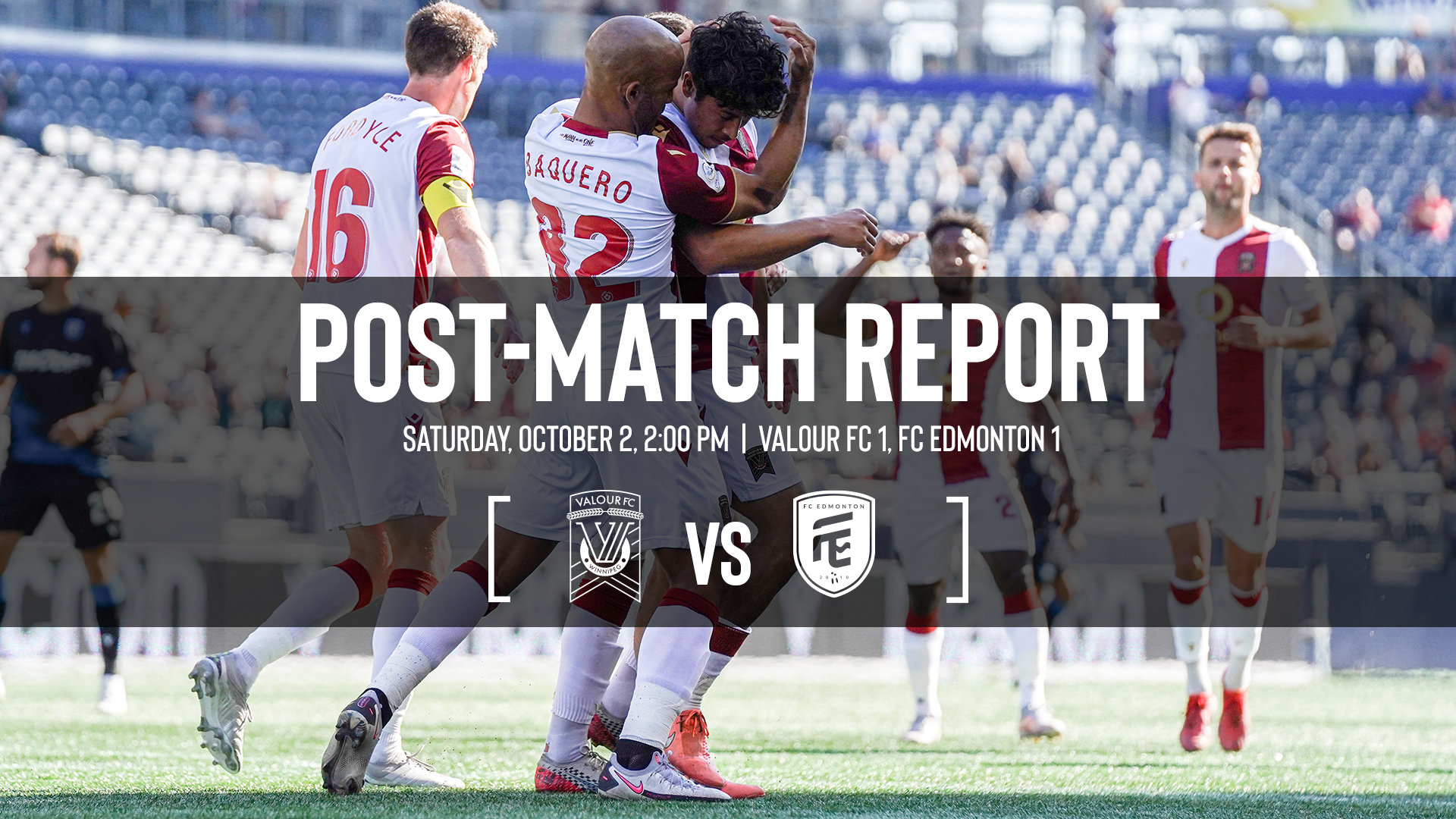 It is without question a positive, albeit small, step forward for Valour FC.

Still, with Valour in full chase mode of the fourth and final Canadian Premier League playoff spot, it’s also not just about the small step taken, but the giant leaps necessary right now as the schedule shrinks.

And in that respect Saturday’s draw does also represent some opportunity lost.

“We want to win. I wanted to, one, get my first win for the club and, two, give the fans the win today.”

Valour opened the scoring in the 14th minute in what could be described as a bizarre sequence. First, Moses Dyer was tackled in the box by Edmonton keeper Darlington Murasiranwa, setting up a penalty for the New Zealand attacker.

Perfect on the penalty in 2021 with three goals on three chances with his trademark stutter-step approach, Dyer’s first attempt was stopped. But with Murasiranwa having left his line early, Dyer got another opportunity and promptly buried the chance – minus the stutter-step – to give Valour a 1-nil lead. It was Dyer’s fifth goal of the season and fourth from the penalty spot.

Valour’s pressure flatlined a bit early in the second half and Edmonton capitalized in the 67th minute when Easton Ongaro – the CPL’s all-time leading scorer – took a pass from Tobias Warschewski and deftly put it past Jonathan Sirois for his ninth goal of the season and the match equalizer.

Valour would have opportunities after that, the most dangerous being a chance by William Akio in the 86thminute, but could not find the back of the net and the critical extra points.

Now 7-3-11, Valour is four points back of fifth-place HFX Wanderers and five back of York United FC, which holds the final playoff spot. Those two clubs play Sunday, meaning one or two of them could pull that much further ahead.

“Overall I’m quite happy with the performance the team put out today,” said Sirois. “It was a very disciplined performance and from game to game you can see that we’re getting more confident in the structure that we’re putting on the field and the guys are putting all the energy we have.

“We always aim for three in a game like today where they also had a few chances and we had a few is OK because there’s been times in the past where similar situations where we’d come out of the game with none.”

There’s truth in that, of course, and the evidence is in Valour’s fall from first in the CPL standings to sixth. The club now has one win and three draws against 10 losses in its last 14 matches.

“Progress is not on the pitch only,” said Dos Santos. “It’s important to see the progress on the pitch, but it’s also important to see the progress that’s happening around the team. I feel that every day there’s growth. I look at the team and I go back to that first game we played with conceding so many chances to the opposition and so many shots. Two games back to back for us it was very difficult for Edmonton to play through us through the middle. We’re doing a better job of keeping things tight, things compact, and eliminating distance between our lines.

“Now, of course it’s a reality,” Dos Santos added. “It’s three points (available). It’s important, especially when we know our two direct rivals for that fourth position are playing against each other, so someone’s going to draw points. It was important to get the three points.”