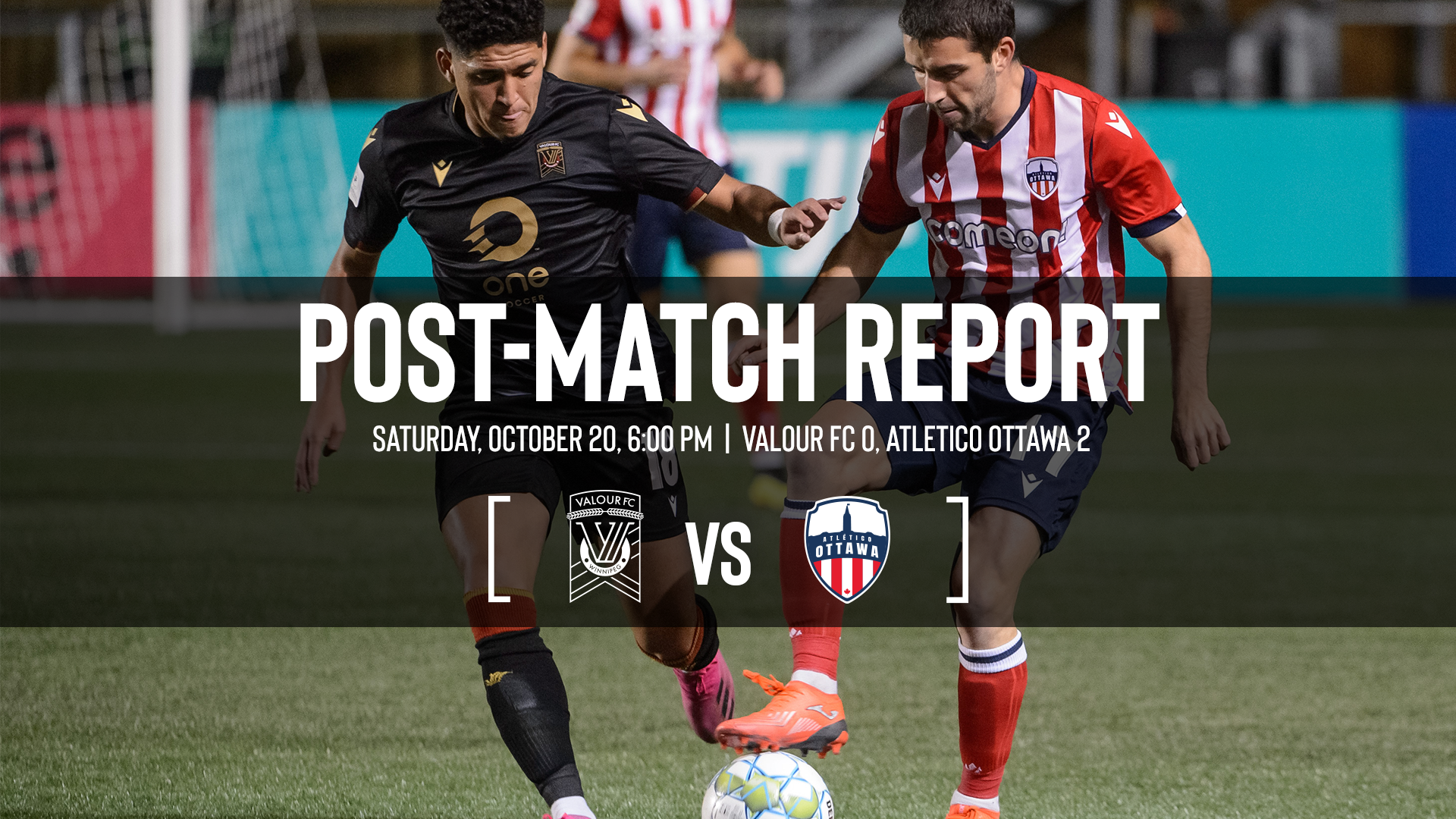 Valour FC’s dreams of a Canadian Premier League playoff spot are dangerously close from being moved from the intensive-care unit to life support.

Desperately needing points close ground on the teams ahead of them in the hunt for the CPL’s fourth and final playoff spot, Valour instead collapsed in a 2-nil loss to last-place Atlético Ottawa at The Stadium at TD Place Wednesday night.

And while they have yet to be mathematically eliminated, none of the numbers here are positive. Valour is now 8-4-13, still four points behind fifth-place York United DC and five behind HFX Wanderers FC, which holds down the final playoff spot.

Valour has just three matches remaining – next Tuesday at home to HFX, the final two in Calgary and Edmonton — while Wanderers and York each have a game in hand.

“I stand by what I said,” said Valour GM and head coach Phillip Dos Santos about battling until mathematically eliminated. “I don’t want to think about an elimination when there’s still nine points to be played and depending on what’s happening on the weekend (with York and HFX both in action) it could still be status quo, it could be the gap being bigger. So, we have to wait and see now.

“Obviously it’s more difficult, but not impossible, so we have to keep fighting. That’s my mentality and that’s the mentality I want the guys to have.

“Now,” he added, “if someone is already thinking about vacations then he’s going to have to tell me and I’ll just put someone else on the field who still believes. That’s the way I go about it.”

Valour dominated in possession numbers, 61.1 to 39.9 per cent, had 26 shots – only 13 on target – and eight corners to Ottawa’s two. But Atlético capitalized on two counter-attacks on their goals – by Malcolm Shaw and Ryan Telfer in a 14-minute span in the second half — and some sloppy defending by Valour to emerge with the victory despite those one-sided statistics.

“It’s very simple: last time I checked the game is about scoring goals and not about having territorial control or ball possession,” said Dos Santos.  That was the game. We had the ball, I felt that we spent the majority of the game in the opposition’s half, but we couldn’t find solutions in front of goal. We couldn’t find ideas and we knew Ottawa was a team that would set up the way they did and exploit the spaces that we would give them behind.

“I alerted the guys that although we were in control for a big part of the first half, they still had the two best chances. We knew that we had to be very cautious in how we would defend the space and we knew that the more the 0-0 would stand, the more we were at risk to open the game a little bit too much. And that’s what happened.

“We got the ball, we had control of the field, but we couldn’t score. The game is about scoring goals. Ottawa did. We didn’t.”

-This was Valour’s first loss against Atlético Ottawa in the two-year existence of the CPL’s newest franchise. Valour had previously won all three regular-season matches by a combined score of 7-0 and also defeated Ottawa 3-2 in the Canadian Championship earlier this summer.

– Valour opened the CPL season with six wins and one loss in its first seven matches at the ‘Kickoff’ event in Winnipeg, but has just two wins, four draws and 12 losses since.