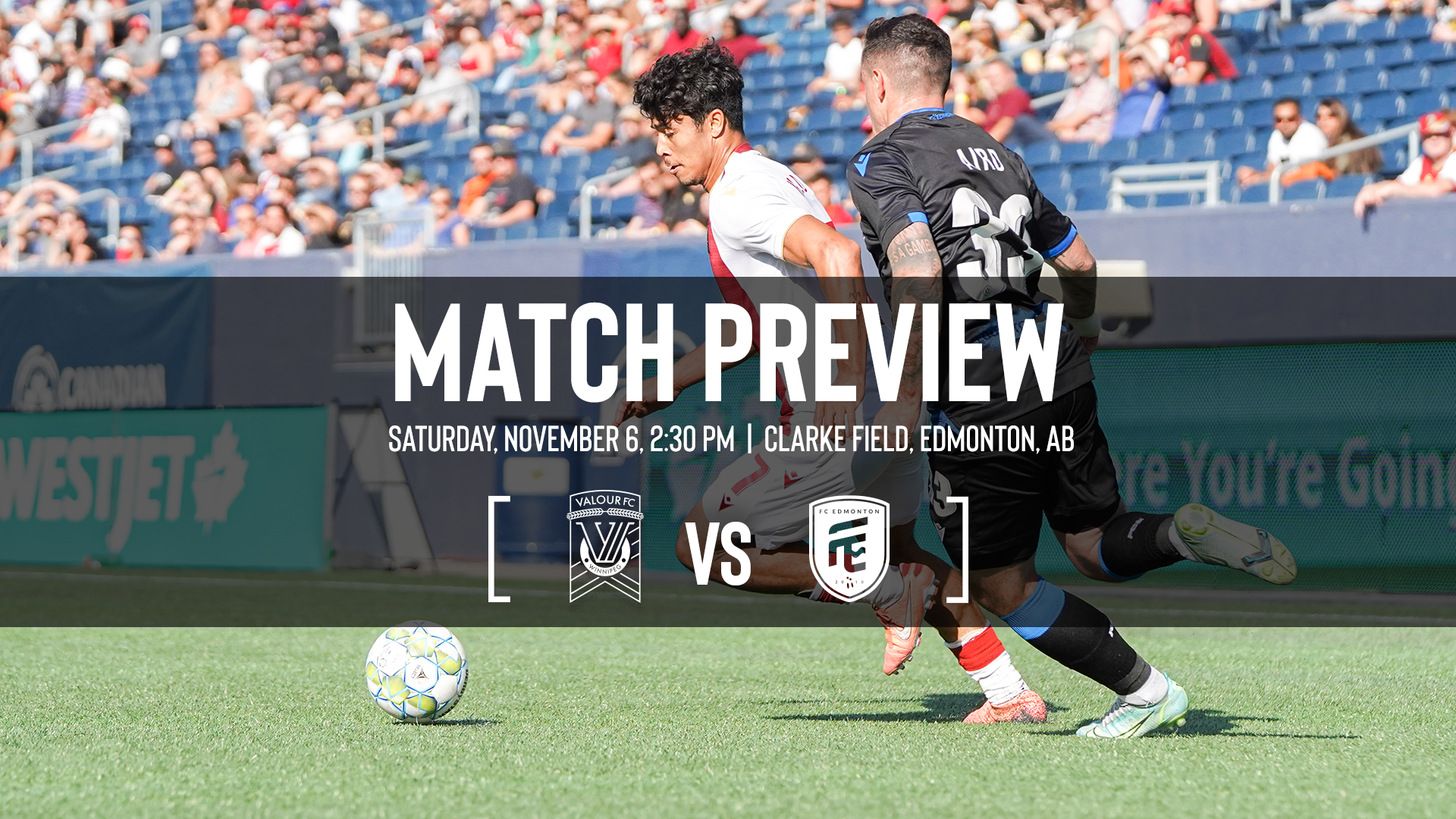 “The message is simple: to keep doing what we’ve been doing in the last couple of games and play with the same belief and with the same never-say-die mentality.”
November 5, 2021

First, the good news: after all the ups and downs for Valour FC this season – a great start followed by an iffy middle and then some promising results down the stretch – the club’s playoff hopes still have a pulse.

And now the potentially bad news: Valour’s last-gasp stab at landing the fourth and final Canadian Premier League playoff spot could be snuffed out before the squad even steps on the pitch for its regular-season finale Saturday afternoon against FC Edmonton in the Alberta capital.

After piecing together a two-match winning streak, Valour now has 34 points on 10 wins and four draws against 13 defeats – two points behind York United FC (8-12-6, 36 points) and tied with HFX Wanderers (8-10-9, 34 points). York is on the pitch hosting Forge FC in the first of two CPL matches on Saturday and a Unitedwin would eliminate Valour from the postseason for a third consecutive season.

To sum up, then, Valour needs to have Forge win or tie York, win its own game against the Eddies and then hope York loses its finale – also against Forge – on Tuesday.

“It’s hard for me to tell the guys ‘Don’t connect yourself to that other game’ because even if tell them or try to not bring it up, it’s not going to happen,” said Valour FC GM and head coach Phillip Dos Santos prior to the club’s departure to Edmonton. “It’s hard for me as a coach to manage that.

“The most-important thing is for us to understand the responsibilities we have no matter what happens in that game. The message is simple: to keep doing what we’ve been doing in the last couple of games and play with the same belief and with the same never-say-die mentality.”

Valour’s late-season surge served two purposes: first, no one wants to be eliminated early from the playoff discussion. And, second, it has given Dos Santos some clarity as he looks ahead to 2022.

“Absolutely. ‘Clarity’ is the right word,” he said. “Today I have a much better idea of what we have than after the first three or four games. They’ve had a great opportunity to show their character, their willingness to be part of something that is bigger than individuals and being able to do that under fire shows you who is really able to deal with this. These moments where we can’t afford to lose points where the challenge is big allows us to make a better evaluation of these individuals. Many have responded very well to that.

“I’m happy with the way they’ve embraced this last stretch of the season knowing that our margin of error was very small. Yes, it was important to win, but we had to win feeling like we were building something and laying a foundation for what this club needs to be. That’s what we’re doing.”

And so as Valour prepares for its regular-season finale its focus is split into three areas – the York-Forge match just prior to theirs that could officially eliminate them, their own match against Edmonton, and the big-picture take that involves 2022 planning.

“I was asked this question many times: what did I want this quad to look like?” said Dos Santos. “I always said I wanted a resilient group, a group that understood the obligation we had to play to win every game and not just to play with the fear of not losing. The last few games have been a demonstration of that.

“When we look back, whatever the outcome is, we have a foundation to build from. We know exactly what we are going to look like coming into preseason next year and have many of the questions answered as to who can be here and be a part of what we want to build. You’re only able to begin answering those questions when you do lay a foundation to say ‘this is who we are. This is who we want to be.’

“There’s guys who have responded well to it and others not as well, so we make decisions based on that. It was important to play these matches at the end of the season with a coherent message that was clear to everyone and just play with that mentality, that strength, that desire that as we grow, we want to grow winning and have a chance to be a playoff team and one that is fighting until the end.”