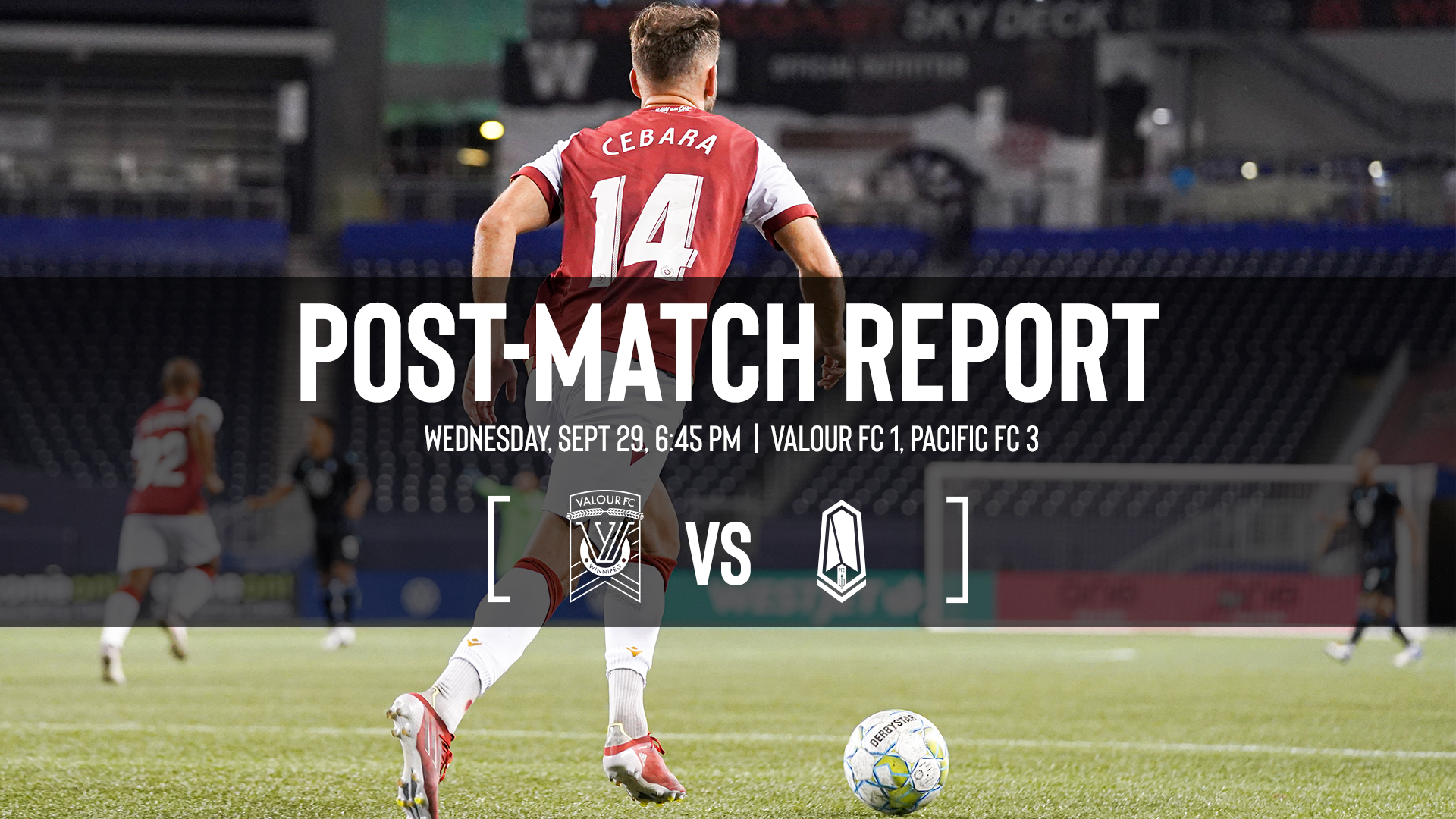 “There’s a lot to work with. I think the guys played a good game, a solid game. Yes, at times we lacked a bit of solutions when we were on the ball.” | Post-Match Report
September 29, 2021

It’s a lovely sentiment – ‘better to give than to receive’ – but Valour FC is living proof it’s an approach has absolutely, positively no place on the pitch.

Valour, playing its second match under new GM and head coach Phillip Dos Santos, offered up a spirited but sloppy effort Wednesday night in front of their faithful at IG Field, and it cost them – again – in a 3-1 loss to Canadian Premier League powerhouse Pacific FC.

As a result, Valour’s playoff hopes continue to fade quickly. With just one win, two draws and 10 defeats in its last 13 matches Valour has tumbled from first in the standings to sixth, now at 7-2-11, and with 23 points is five back of fifth-place HFX Wanderers and six behind York United FC, which holds the fourth and final playoff spot.

“The guys, you can’t fault their effort,” said Dos Santos. “You saw a team that kept the game tight, the opposition didn’t have a lot of space. They had a bit of the ball with their back line and by a lack of space they were looking for a space behind and we did a decent job of dealing with that.

“Now… it’s already hard enough to win games, so if you want to win games you have to stop shooting yourself in the foot. That’s exactly the message I passed on to the guys. There’s a lot to work with. I think the guys played a good game, a solid game. Yes, at times we lacked a bit of solutions when we were on the ball.

“But I don’t think Pacific was superior in the run of play. Pacific didn’t make mistakes and we did make mistakes. That’s often going to be the case – you’re going to lose games if you don’t limit mistakes.”

Valour fell behind early when centre back Rocco Romeo bumped Pacific’s Alejandro Diaz just 90 seconds into the match in the box, with Diaz then burying the ensuing penalty.

But Valour responded immediately and capitalized with a superb goal by Moses Dyer in the 30th minute.

Moses Dyer with a fantastic off-balance effort to find the equalizer for @ValourFootball against @Pacificfccpl, its now 1-1#CanPL 🇨🇦 | 📺 TELUS ch. 980 | 🔴 https://t.co/hishXepRT3 pic.twitter.com/odXYbl7a8Z

Alas, the work done in evening the score was undone just before the intermission when another breakdown in the box cost Valour as Diaz gobbled up a loose ball just in front of Sirois before finding the net in added time.

“(The goal against) was critical,” said Dos Santos, “because right before we had a chance where we played a ball behind and I believe Moses almost got in 1v1 versus the goalkeeper. We don’t score and then we go and give a goal that we all know is very avoidable.

“Now you’re playing a second half where you have to chase the result and these things are always more difficult for a team because you already know that Pacific is a team that when they have space in behind they have individuals that can exploit that.”

Valour now has eight matches remaining to get back in the fight, including the next three at home.

“It’s just our mistakes,” said Dyer afterward. “I think all the goals conceded were probably could have been solved through communication. I felt like we played well, but we still lost.

“It’s frustrating. But we’re still in it. We’re going to still make playoffs, that’s still our goal. Of course, it’s frustrating, but we can’t really focus on what happened before.

“We’ve got a good team. We’re very strong. We’re one of the better teams in the league, so we’re confident. We just need something.”

-Valour FC captain Daryl Fordyce did not dress for the home side, and Winnipegger Marco Bustos remains out with a knee injury.

-Valour keeper Jonathan Sirois has now faced two penalties this season and has stopped one and had one get by him.

-Dyer’s goal was his first in open play, with his first three of the season coming from the penalty spot.