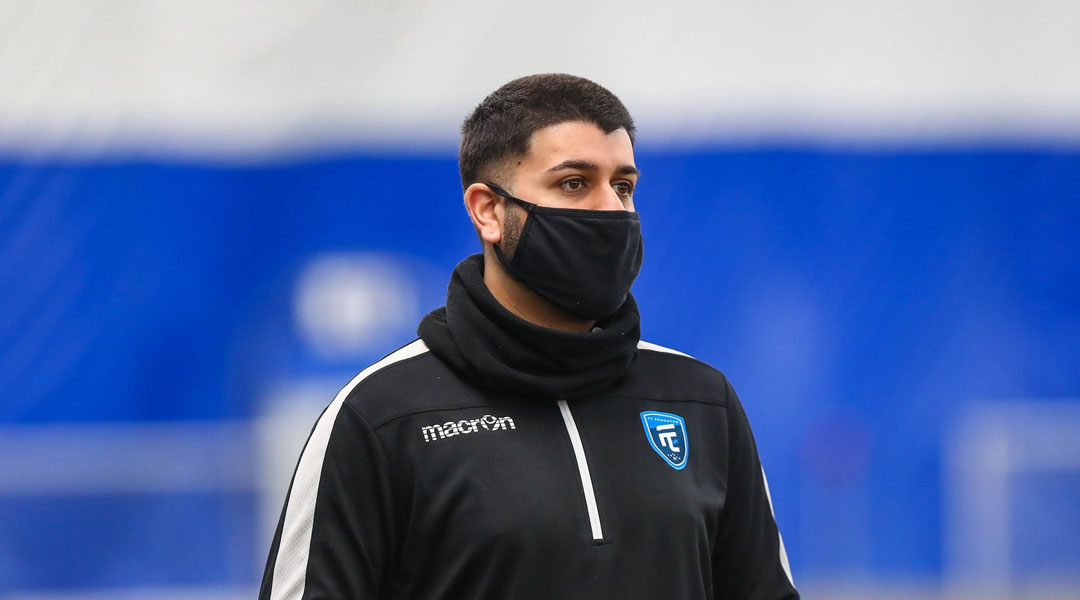 “This is my passion and it’s driven me every day.” | Jay Bhindi joins coaching staff
January 12, 2022

There was no ‘eureka’ or ‘ah-ha’ moment for Jay Bhindi where his career choice to become a coach suddenly appeared to him in an instant.

Instead, it’s as simple as this: he just loves the game. He loved during his days as a player, loves it now as a fan, and loves it even more so now as a coach.

That passion is part of what has landed him in Winnipeg as Valour FC’s new Assistant Coach and Video Analyst as part of the staff that GM and head coach Phillip Dos Santos has put together for his first full year at the helm.

“I was just a regular local player growing up in Ottawa, but at the end of my teenage years I already knew I wanted to transition into coaching,” began Bhindi in a chat with valourfootball.club from the Valour office at IG Field. “I made this decision at about 21 to jump into coaching and commit everything I can to develop. I first got an opportunity with the Ottawa Fury when that team first got into the professional realm with an elite youth academy and just spent hours and hours at the facility then just watching different coaches.

“That’s how I started in coaching and knew this is something I wanted to pursue.”

Bhindi’s passion is evidenced right there on his coaching resumé. Just 31, the Ottawa product spent 2011-16 with the Fury as an assistant coach for the club’s youth teams until he became a first team analyst for their USL championship squad in 2016. He was last with FC Edmonton as an assistant coach and was a first team analyst/opposition scout for the USL’s Austin Bold from 2019-21.

Along the way he has also had coaching education internships with FC Porto (2018), Academica SF and Vitoria de Setubal (2017) in Porgtual, and Fenerbache SK, Besiktas JK and Manisapor in Turkey (2015).

He is fluent in four languages – English, Turkish, Portugese and French – and also has a background in scouting, travel logistics and other organization skills.

Valour also announced that Damian Rocke would be returning as Assistant Coach/Director of Youth Development and that Patrick Di Stefani is back as the Goalkeeper Coach.

“Jay is someone who always demonstrated a lot of passion for the game, passion to grow, to learn, and he’s extremely motivated to help and to make sure the team and the players have everything they need when it comes to preparation,” said Dos Santos. “It’s important for me to get people who are passionate and motivated into our coaching staff and understand that this is a job where you don’t have hours and where you have to be extremely committed to the game and the players you work with – Jay has those characteristics.

“And with Patrick and Damian, it was important for me to bring continuity to the table with people that understood the city, the club, the community.

“All three of them add value and all have different skill sets. They have an eye for the game, they love the game, and they like to study the game. It’s also the way they present it. To me, all of that is important.”

Clearly the Bhindi made an impression on Dos Santos, and vice-versa, as some 10 years after first becoming a coach in Ottawa the two are reunited here in Winnipeg with Valour FC.

“I like to say now that I was a bit spoiled when I got into coaching when I was really young,” Bhindi said. “I got to experience a lot with the Ottawa Fury project and being around Phil and Marc (Dos Santos) and the other staff on a daily basis. I was like a sponge at that point soaking in everything. Working very heavily with Phil with the Academy project there I learned a lot from, and he helped mould me to where I am today as a coach from designing sessions and methodology… I spent my formative years with him and so it’s exciting to work with him again a few years later.

“It’s a commitment, a commitment of your time, your resources, your energy and some sacrifices in life. But I knew this is something I wanted to pursue and commit everything to, and I still am as I venture forward in this journey.

“This is my passion and it’s driven me every day.”