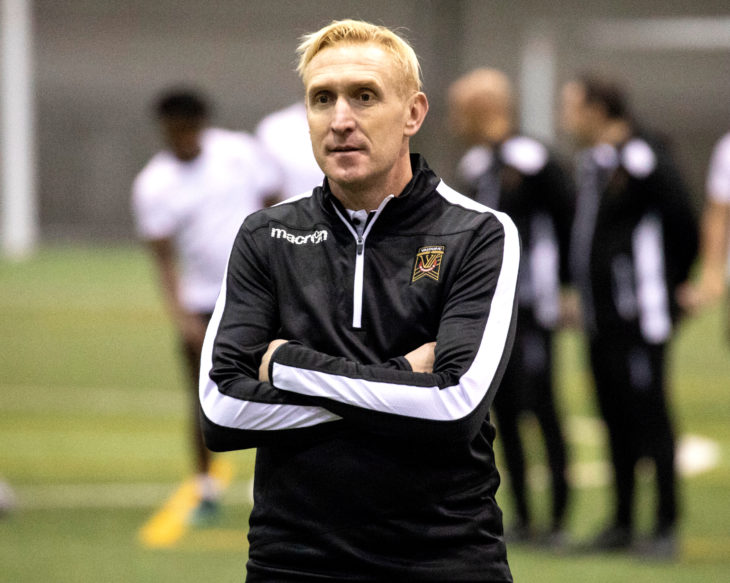 The difference a year has made is exciting to Rob Gale as he continues to build his roster.

This time in 2019, The Valour FC head coach was courting players to join his first-year team in the first season of the Canadian Premier League.

In 2020, established players are trying to prove to Gale that they deserve one of the final roster spots available on one of the league’s eight teams.

About a dozen free agents have gathered in Winnipeg for an invite-only tryout, hoping to earn an invite to Valour FC’s full training camp only days away. Players taking part range from amateurs looking for a first contract to Canadian free agents with experience at the pro level. A few of them played for other Canadian Premier League clubs in 2019.

This week’s workouts are not a simple player evaluation; there are real contracts up for grabs if they impress enough. Something that Gale has made clear to those taking part.

“The way we’ve looked at it there’s certain positional needs that we are certainly going to make a signing on,” Gale said. “After that, it’s kind of like open trials, seeing if they can make it to the next stage and compete with the players already under contract.”

Among the group is Stefan Cebara, a 28-year-old winger who has been capped 5 times by the Canadian men’s national team. After stints in Serbia, Hungary, Slovenia, Slovakia and Lithuania, Cebara took the 2019 season off. The hope from the Winnipeg side is that the Windsor, Ontario native has some more left in the tank. And Gale is tracking his progress closely.

“He’s a really interesting one for us,” Gale said. “He’s technical, fast and lots of experience. ”

There are also some familiar names to those who followed the CanPL’s first season. Austin Ricci (York9 FC), Chakib Hocine (HFX Wanderers) and Tofa Fakunle (Cavalry FC) are all working to earn a contract with a new club for the league’s second season.

Add in former Orlando City B defender Brandon John and some standout players at the amateur level, plus those who impressed at last week’s open trials and it’s obvious this is a serious tryout.

“Some of these players I already knew and have worked with,” Gale said. “We put out a specific profile of players we are looking for, then these boys come in for formal training and see where they’re at.”

Having players with professional experience battling for a spot in the second year league doesn’t come as a surprise to Gale either. The hope is that the level continues to rise with more and more competition for spots, whether or not they are Canadian. Gale expects to be in this place again for year three, with more quality players battling just to get into the league.

“I think it’s natural and you’ll see it as more players get interested in the league,” he said. “We’re getting interest from everywhere, like this season we add (Andrew) Jean-Baptiste, Arnold (Bouka Moutou) and Moses Dyer, players with experience at high levels. It’s exciting that players want to be a part of this league and join our club and I think the level of player that wants to come here is only growing.”

Gale also feels the consensus around the coaches of the original seven clubs is that a standard of play has been set.

“We didn’t know the level in year one, now this year it will be even higher and increase year after year,” he said. “I think as this grows and we add another team to the league, everybody is looking at upgrades from last season and working towards building at that level.

“Everyone is becoming a bit savvier and looking at how to incentivize people to come here and that will lead to more upgrades.”

The same type of savvy that leads to courting free agents with professional resumes to try and prove themself at a tryout in Winnipeg? Only time will tell as Gale evaluates his free-agent hopefuls.

Valour FC’s training camp begins in earnest on Saturday, March 7th. Gale says that anywhere from two to five players from this week’s tryouts will be invited to join the roster players and U-SPORTS draft picks. From there, spots remain up for grabs for those willing and able to take them.