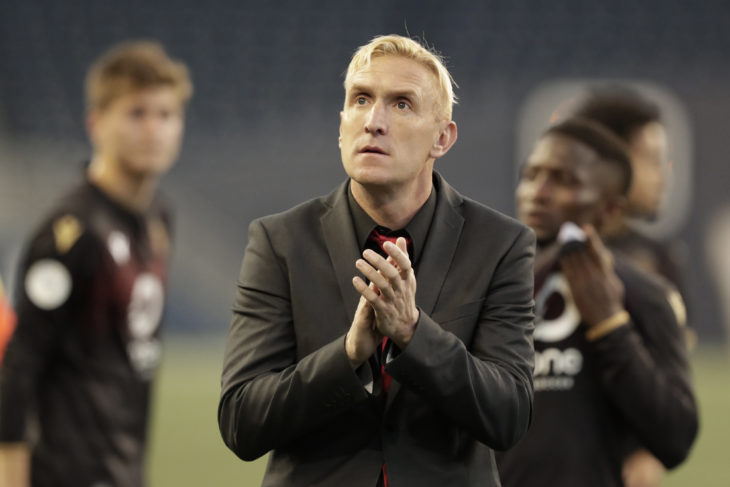 Rob Gale takes a moment to spread Valour FC’s freshly printed 2020 Canadian Premier League schedule across the table and instantly, an extra large grin breaks out across his face.

“It looks soooo much better than last year,” began Valour’s GM and head coach. “We’ve got way more weekend home matches, which is music to everyone’s ears. There’s better periodization, less congestion, it’s better for supporters. Everything about the new schedule is as we’d hoped, especially now that we have eight teams and balance to it.”

The CPL’s second-ever schedule was unveiled on Friday and like last year, there will be 28 regular season matches, plus a minimum of two Voyageurs Cup contests for the domestic championship.

Gone are the Spring and Fall competitions that comprised the inaugural season and identified the two finalists. Instead, the CPL will now have a playoff format that will see the first-place squad earn a bye, with the second and third-place teams facing off to advance to the final.

Valour FC opens their 2020 season with two straight road matches – Friday, April 17 against York 9 FC in Toronto, followed by a trip to Westhills Stadium in Victoria for a date with Pacific FC on Sunday, April 26.

The home opener then follows with Atlético Ottawa – the CPL’s newest and eighth quad – visiting on Saturday, May 2. That weekend home date represents one of the major improvements in the Valour FC schedule compared to 2019. A year ago Valour’s home schedule featured five Saturday dates, four on Wednesday (including a Voyageurs Cup match), three on Thursday and three on Monday – although two of the latter were played on Canada Day and Labour Day.

This year, 11 of the 14 home dates fall on either Saturday (seven) or Sunday (four). There is also a Friday night match and a Wednesday Canada Day matinee. The only other mid-week home date is a visit from Forge FC on Wednesday, July 22.

Gale also likes the spacing between matches, although there are some potential trouble spots. Five times this coming season Valour FC will have just two days between matches and on four occasions, there will be matches just three days apart.

In any case, that’s still a far cry from last year’s schedule, which saw Valour FC open the season with five matches in 15 days.

“That was tough and it cost us with big injuries as well with Mike Petrasso, and Josip (Golubar) was lost in the third game of the season for the rest of the year,” Gale recalled. “Our injury mess spiralled from there and we didn’t have anything (match-wise) for the next 15 days.

“A schedule like this allows us to not just maintain the players in between to recover, but have a full micro and macro cycle of travel, rest and recovery. It’s about routine. That’s always tricky. Ideally you’d like to have 72 hours between games to prepare and just for the well-being of your athletes. This time it’s slightly better although not ideal.”

Valour FC will be busiest in the month of June, with seven matches – five of them on the road. The regular season concludes on October 4 in Ottawa.

“Awesome addition,” said Gale of the CPL’s eighth franchise. “I think the fans will be excited with the new team and with the fanfare of Atletico behind them coming to our patch to start the year and then finishing the schedule in the nation’s capital is going to be awesome.”

Critical now for Valour players who return from 2019 – and for the entire staff – is to learn from their travel and schedule experiences in Year 1 and make the necessary changes in Year 2, from practice and travel times to managing days off for the players.

“Undoubtedly, experience brings things to you,” said Gale. “There were learnings on and off the field for the league in terms of putting the schedule together. Obviously it’s tough with stadium usage and dual usage in many stadiums. And for the players… I think people underestimate the travel. You saw it with Wayne Rooney when he came over to the MLS, Steven Gerrard… all of those guys.

“The amount of travel and time-zone changes, climate change – I’m not stepping on Greta Thurnberg’s toes, but a different type of climate change – jet lag, it’s all a learning experience. We arrived at Halifax a couple of times having arrived at three in the morning and you’ve got deliver a (practice) session right away and learn how to prepare yourself while keeping the same kind of energy and enthusiasm.

“We’ve all learned from all those experiences and need to now apply them to 2020.”