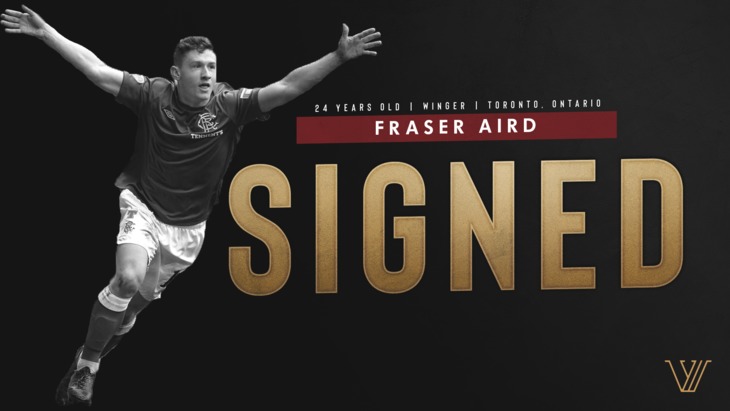 “We are delighted to sign a player of his undoubted pedigree and experience and have him in Winnipeg. He is a terrific character and will be a great addition to our club,” said Valour FC Head Coach & GM Rob Gale. “Fraser is a player I’ve had a long association with from bringing him back into the Canadian national team at the U-20 level.”

In 2011, at the age of 16, Aird joined Rangers F.C (Scottish Premier League) and quickly worked his way into the first team where he made his debut in 2012. He was part of the squad that made history during the 2013-14 season when they became the first Rangers team to go unbeaten in 115 years and then win the Scottish League championship. The midfielder would finish his time at Rangers with 62 appearances, and 9 goals.

In 2016, Aird was sent on loan to the Vancouver Whitecaps (MLS) where he made 18 appearances, then returned back to the Scottish Championship in 2017, joining Falkirk until the end of their season.

That summer, he joined Dunfermline Athletic scoring 4 goals in 21 appearances. He moved on to Dundee United in 2018, and made 19 appearances, scoring 3 times before a loan move to Queen of the South in 2019. The midfielder then signed for Cove Rangers in the fall of that same year.

Internationally, Aird made his debut for Canada in 2010 at the age of 15. His next call up was to the U-20 squad coached by Rob Gale in 2014. The midfielder would score his first goal in a Men’s International Friendly against Scotland in Edinburgh in 2017, earning Player of the Match honours. He has a total of eight caps for Canada, with a goal and an assist.