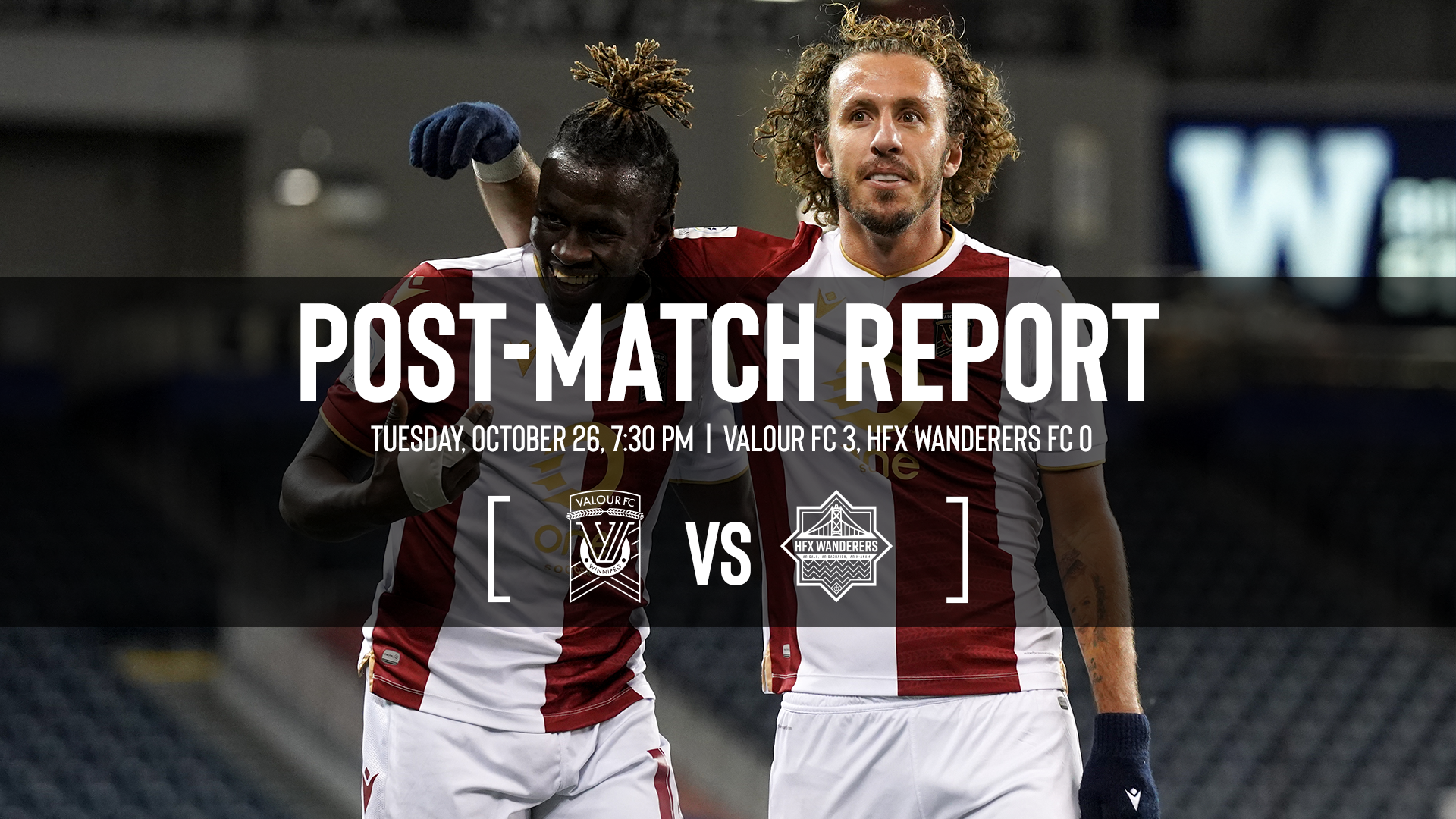 Given up for dead just a few days ago, Valour FC’s playoff hopes aren’t buried just yet. In fact, in the spirit of Halloween let’s say a hand has come shooting out of the grave to indicate the club still has life.

Valour served up a spectacular performance in their final home match of the season Tuesday night at IG Field, a 3-nil win over HFX Wanderers which was critical in a last-ditch effort to secure a spot in the Canadian Premier League playoffs.

The result improves Valour to 9-4-13 (nine wins, four draws, 13 defeats) and 31 points, now just three points back of Wanderers, who hold down the fourth and final playoff spot. Sandwiched in between the two sides and with a match in hand are York United FC, with 33 points.

Valour has just two matches remaining to make up the ground – this Saturday in Calgary against Cavalry FC and a week later on the road against FC Edmonton.

“Very important for us, very important for the club,” said Valour GM and head coach Phillip Dos Santos of securing the three points. “The truth is we’re closer tonight so we have to keep pushing.

“I felt the energy levels were extremely high. I told the guys this is what we need to be about, that’s the type of team that I want to coach. We knew we were playing a team that played on the weekend and had to do the travel here, so it was important for us to get in with very high energy and try to take control of the game early.

“I have to admit that when you feel you have the advantage and you’re not able to score early, you start thinking ‘Let’s take advantage of the situation now.’ We needed a goal and we got the first goal and that was an important one for us, because after we could manage the game a little bit better.”

Valour was on the front foot right from the start, but it wasn’t until the 38th minute that they had something concrete to show for the solid foundation they had built, as William Akio took a wonderful pass from Jose Galán before powering a shot through Wanderers goalkeeper Kiernan Baskett.

GOAL 🎖@ValourFootball strike first, going 1-0 up over @HFXWanderersFC by way of a William Akio shot that JUST crossed the line 👀

It's Akio's 6th of the season!

That was followed with another just a few minutes later when Brazilian veteran Rafael Galhardo, who was spectacular all evening, capitalized on another HFX blunder before lobbing a shot over a charging Baskett.

GOAL 🎖🎖@ValourFootball go 2-0 over @HFXWanderersFC at the stroke of half-time!

Valour then sealed the critical points with a sensational goal by Sean Rea in the 66th minute, as he took a backheel pass from Galhardo before blasting a shot off the post and in for his first goal in league play this season.

It's 3-0 for @ValourFootball over @HFXWanderersFC, as Sean Rea scores a BEAUTIFUL debut goal in #CanPL! 🤩

Valour is keeping their playoff hopes alive at IG Field

“It feels amazing, especially in our last home game in front of our fans,” said Rea. “It was really one of the best feelings.

Valour fired 17 shots at the HFX net, with eight on target, had four corners and 52.3 percent of possession. The Wanderers two best chances went banged off the woodwork behind Jonathan Sirois, who managed to secure his league-leading ninth clean sheet of the season.

Valour has little time to ready for Saturday’s match in Cavalry, but will be energized from the result, the second win under Dos Santos since he took over as GM and head coach.

“We’re today three points away (from a playoff spot),” said Dos Santos. “We have a tough game on the road and we haven’t won on the road, so the message is simple: we need to get a first one and it has to start on the weekend.

“It’s a game that we have to go for the three points. We understand the urgency. We know that our direction opposition will be playing with the same desperation because I feel it is a three-team race right now.

“We can’t deviate from what our attitude and our behaviours have been for the last few games. Even though we didn’t win in the last two I felt that there was always good energy to the team and we have to keep pushing. That’s the message.

-Veteran midfielder Jose Galan, who missed most of the first half of the season due to injury, made his first start of the year Tuesday night and was solid in his 78 minutes played.

-Wanderers were without forward Joao Morelli, the CPL’s leading scorer with 14 goals, due to injury. HFX has scored only once in its last five matches – two draws, two losses and a win.