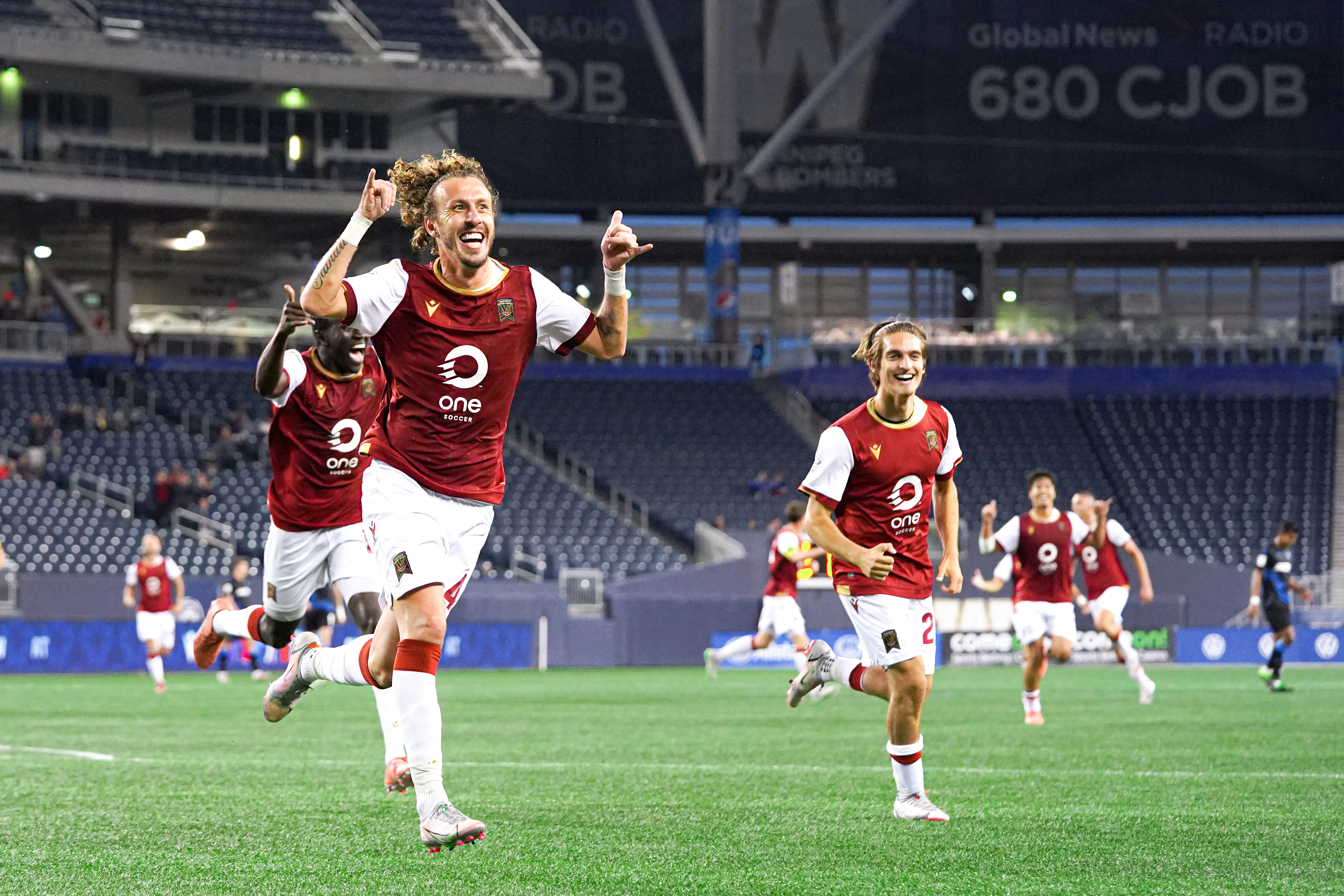 “We felt confident going into Ottawa and we continued where we left off on the front foot.” | Valour 3, FC Edmonton 0
August 24, 2021

Coughing and sputtering to find the back of the net just a week ago, Valour FC’s attack is now suddenly revving like a Formula-1 race car engine.

Valour FC scored 83 seconds into Tuesday’s match with FC Edmonton and then kept their foot hammered down on the gas pedal for the rest of the night in a dominant 3-nil win in front of 2,480 at IG Field.

The result ends a six-match winless streak for Valour in which they managed just one draw against five defeats and were out-scored 9-2 in the process.

Still, it’s also worth noting this: coupled with Saturday’s 3-2 Canadian Championship win over Atlético Ottawa, Valour has not only won consecutive matches, but scored six goals in the process.

The offensive explosion is critical, obviously, in the standings. Valour is now 7-1-6 in league play and with 22 points is alone in third place in the CPL standings behind Pacific FC, 7-4-3 and 25 points, and Cavalry FC, 7-3-3 for 24 points. Two-time defending champion Forge FC is at 19 points at 6-1-5 and has two matches in hand on Valour FC.

“Winning breeds confidence and keeps the spirits up,” said Valour GM and head coach Rob Gale. “We felt confident going into Ottawa and we continued where we left off on the front foot.

“… “We’ve stressed it before: the quality of this team is their togetherness. When they’re working for each other and they’re passing and rewarding the runs like they have been for the last two games then we’re a serious handful for anybody.”

All of that was on display almost instantly Tuesday night as William Akio took an absolutely brilliant pass from Sean Rea before burying his second goal of his rookie season, punctuating the marker with another backflip.

Akio was at it again in the 52nd minute, using his speed to gobble up a splendid through ball by Stefan Cebara before burying his second goal of the night behind Edmonton keeper Connor James.

Rafael Galhardo with his first in the CPL… from the deck!@ValourFootball making a statement 👀#CanPL | 🔴 https://t.co/hishXepRT3 pic.twitter.com/1XqmpE4ubS

Meanwhile, Jonathan Sirois – who returned after joining CF Montreal as a reserve keeper on the weekend – was back in form as he stopped all six of Edmonton’s shots on target to notch his seventh clean sheet of the season, tying him with Pacific’s Callum Irving for the CPL lead.

“We were ready for this game today,” said Akio. “The last couple days of training we were really focussed. We’re coming off a little hump right now and everyone just had the right mentality coming into this game.

“We just came out firing. (The early goal) brought energy to the team. Everyone was excited and I feel that’s what helped us get the win and score two more goals in the game.

“This feels really good,” Akio added. “After the bubble (the CPL’s Kickoff event at IG Field) it was a big change. In the bubble we were forced to be together and work together. Once we got out we kind of lost focus a little bit.

“But now that we’re back together as a group it’s really positive going forward and hopefully we can get some more wins.”

-Valour midfielder Raphael Ohin sat out the contest after picking up his fourth yellow card of the season in the previous match against Edmonton.