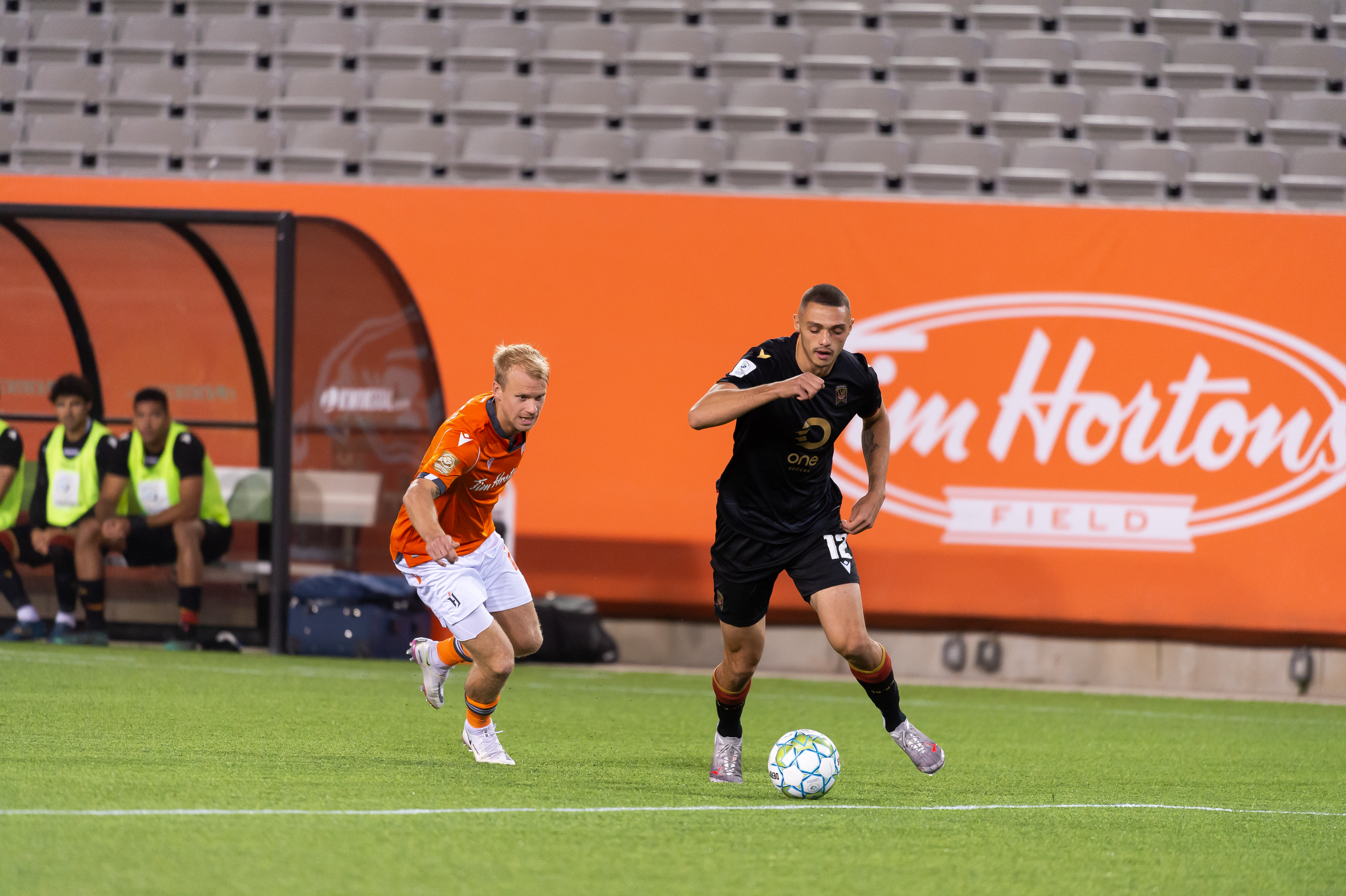 HAMILTON, ONTARIO - SEPTEMBER 15: 2021 Canadian Championship Quarterfinals game between Hamilton Forge FC and Valour FC at Tim Hortons Field on September 15, 2021 in Hamilton, Ontario. (Photo by Ryan McCullough/Hamilton Forge FC)
“We live and we learn and we move on to the league (play) and hopefully bring that second-half confidence into our next league game”
September 15, 2021

Valour FC’s run in the Canadian Championship has ended with both a controversial and potentially costly result.

Forge FC, the two-time defending Canadian Premier League champions, brought the hammer down on Valour FC in a 2-1 win Wednesday night at Tim Hortons Field in Hamilton in the Canadian Championship quarterfinal.

The result, coming in a single-knockout format, means Valour is out of the competition after winning its first-round match 3-2 over Atlético Ottawa in August.

What’s worse for Valour FC is their leading scorer, Austin Ricci, had to leave the match after injuring his knee on a collision with Forge keeper Triston Henry while potting the club’s lone goal in the 60th minute.

Austin Ricci halves the deficit for @ValourFootball against @ForgeFCHamilton, hurting himself in the process. It is now 2-1#CanChamp | #CanPL | 🔴 https://t.co/hishXepRT3 pic.twitter.com/GTC5TLFNME

“The keeper just followed through and whacked him on the knee,” said Valour FC GM and head coach Rob Gale when asked for an injury update on Ricci. “He tried to catch Brett (Levis) late with one, too… he sometimes dangles the leg in there and unfortunately Austin coming through him at full speed got hurt.

“Obviously it’s too early to assess it.”

“Listen, I’m going to plea as long as I can that’s a handball,” said Silva in a media Zoom call after the match. “I’m sure you guys saw it on video with the replay. It is what it is. There’s missed calls, there’s good calls, there’s bad calls. It doesn’t matter. Like I said, in the first half we didn’t put the front foot forward and maybe capitalize on some chances we should have.

“It’s one call. It sucks that it leads to a goal, but there’s a thousand of those in a game and some don’t lead to goals and some do, some work in your favour, some don’t.”

Forge dominated possession for a good chunk of the opening half, but despite having a significant shot advantage – 15-2; including 10 from inside the box – wasn’t able to unlock Valour’s defence until the 33rd minute.

Once they did, two goals came within a span of five minutes as David Choineire opened the scoring in the 33rd, followed by Woobens Pacius in the 38th. The Pacius goal, upon replay but without video review, came after the rebound on the first shot saved by Silva hit the goal-scorer’s hand before he found the back of the net.

“But we were too passive in the first half. Changed the shape and in the second half we were a much better team, we were on the front foot, we were aggressive, we played between them, we defended higher up the field… that’s the blueprint for us going forward – to get on the front foot, get on the throttle and go at teams across the park.”

Valour was significantly better in the final half, but couldn’t find the equalizer after Ricci’s goal in the 60th minute.

“We maybe gave a little bit too much respect to Forge in the first half by sitting off a little bit too much,” said Silva. “From there it was tough for us to counter them and with the surface being so slick we were just unable to put together a few passes, typically that’s our strong-suit; moving the ball, high triangles, switching platforms.

“Second half we really put the front foot on, put the pressure on and, honestly, just stopped respecting them. We just went out there as if we were a team that was going to beat them like we did in the bubble and the chances came from that. Austin put one away by putting pressure on Tristan (Forge goalkeeper Henry) and after that we had a lot of good opportunities from there.

“A wasted half, a half of too much respect, and then a second half of what we really do bring and what we should have brought right from the off. We live and we learn and we move on to the league (play) and hopefully bring that second-half confidence into our next league game.”

Out of the Canadian Championship, Valour will now turn its attention to the final chunk of the CPL season. Struggling to get results of late with just one win and a draw in its last 10 in league play, the club has fallen to fifth spot and out of a playoff position with 11 matches remaining.