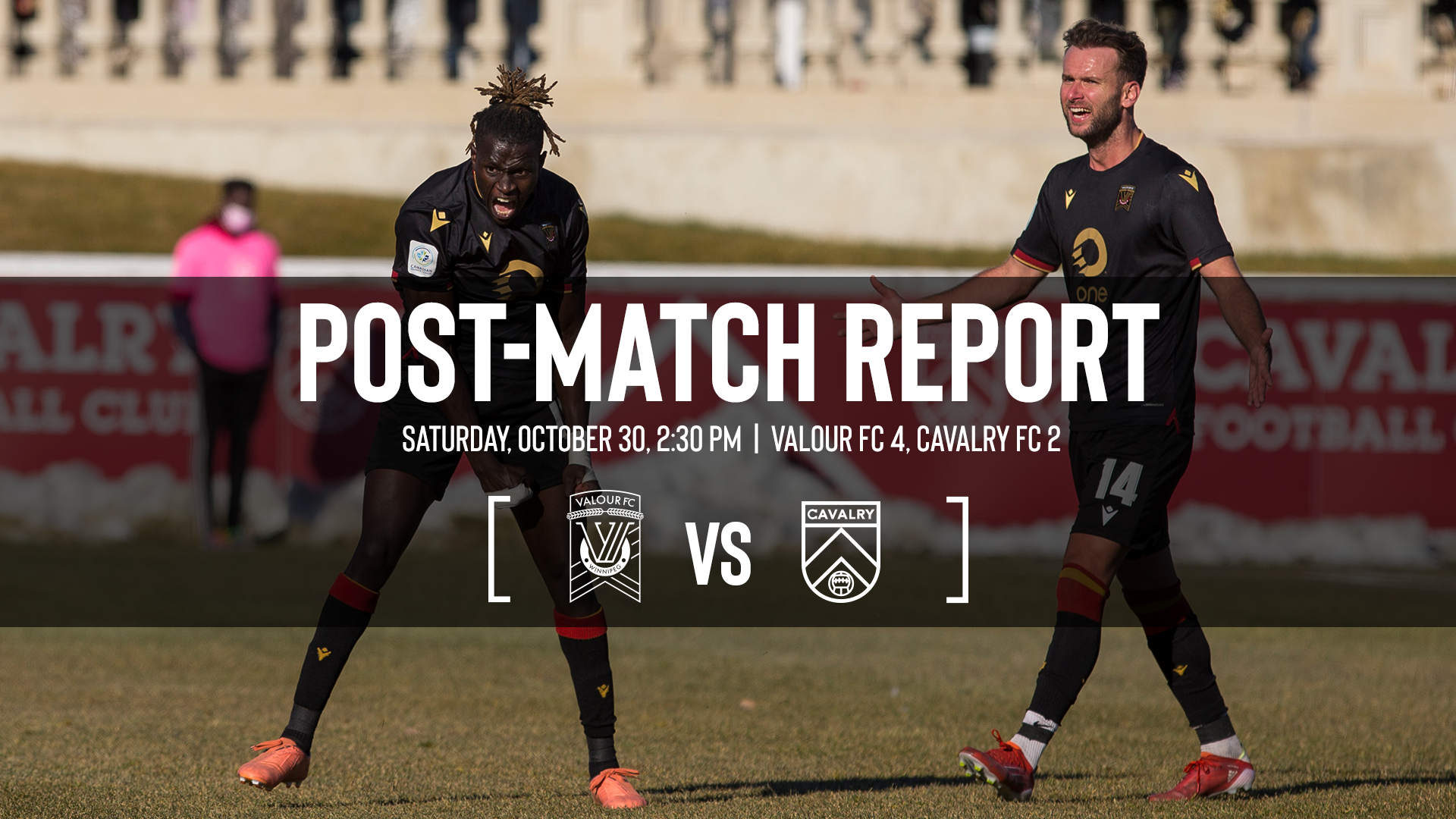 Flashing a flair for the dramatic, Valour FC has found some magic and some life again.

Valour FC knocked off Cavalry FC 4-2 at ATCO Field in Calgary Saturday afternoon and, in the process not only crossed off a few firsts on their to-do list, but more importantly kept alive their Canadian Premier League playoff chances.

The victory improved Valour to 10-4-13 (wins, draws, losses) on the season, good for 34 points. That leaves the club tied with HFX Wanderers– who fell 4-1 to Forge FC earlier in the day — for fifth spot in the CPL standings – two points behind York United FC, who edged Pacific FC 2-1 Saturday night to move into the fourth and final playoff spot with 36 points.

Valour’s last match of the season goes next Saturday on the road against FC Edmonton, while Wanderers finish their season a day later at home to Atlético Ottawa. York United is home to Forge FC for both of their final two matches, November 6th and November 9th.

“Everyone’s belief is really high,” said Valour winger William Akio, who scored his 7th and 8th goals of the season. “We weren’t doing too good in the middle of the season and we have nothing to lose now, so we’ve just got to come out, play with everything and see what happens.

“We’re just controlling the controllables and that’s getting as many points as we can and the other teams ahead of us dropping points just works in our favour. So, as long as we keep doing our job I’m sure everything will align perfectly.”

Akio’s effort came on an afternoon when so many Valour players stepped up to deliver with the club’s playoff hopes hanging in the balance. Goalkeeper Jonathan Sirois stopped Cavalry’s Joe Mason on a penalty, Moses Dyer scored his 7th of the season and Keven Aleman sealed the deal with his 3rd of the year in extra time.

GOAL 🎖🎖@ValourFootball find an equalizer at the stroke of half time via William Akio… but was there a missed foul here? 🤔#CanPL 🇨🇦 | 📺 TELUS ch. 980 | 🔴 https://t.co/hishXepRT3 pic.twitter.com/kd4LEz8HSw

Jonathan Sirois PK save and Moses Dyer’s 7th goal of the season:

… then @ValourFootball counters and SCORES! 🤯

Akio’s 8th goal of the season:

At what point does William Akio become an MVP candidate?

Keven Aleman puts a bow on it – @ValourFootball defeat @CPLCavalryFC 4-2 to hand them their first loss at Spruce Meadows, and Valour moves into joint-4th in the CPL playoff race! #CanPL 🇨🇦 | 📺 TELUS ch. 980 | 🔴 https://t.co/hishXepRT3 pic.twitter.com/XvBtbIfK9H

“When you get a new coach, especially midway through a season, the energy changes,” said Akio, who was playing in front of 40 supporters in the city where his family settled after fleeing South Sudan during the cival war there when he was a child. “It’s like a brand new shift… it was like we were born alive again.

“We came in with one task and that was to get as many points as we can and we’ve been doing really well with that under Phil. We’ve just got to keep that rolling.”

The win was not only the first time Valour has ever beaten Cavalry in its existence – having earned just three draws against six defeats in nine previous matches – but was also the first road victory since a 4-2 decision over York back on September 15, 2019.

As well, it was also the first home loss for Cavalry this season and, coupled with Valour’s 3-nil win over Wanderers on Tuesday, marks the first time since mid-July the club has posted back-to-back victories.

The result also came with Brett Levis out of the lineup due to yellow-card accumulation and with Andrew Jean-Baptiste, Austin Ricci, Jared Ulloa, Arnold Bouka Moutou and Masa Kacher all unavailable.

“You start having to go deep and that tells you a lot about the character and personality of the team and what we want to be about,” said Valour GM and head coach Phillip Dos Santos. “We don’t want this to be an individual-based team, we want to be the sum of the parts and everyone needs to be able to step in and do the job. The character and the belief in the locker room has been incredible.

“Now, we can’t celebrate yet. We have to be very careful with it and we need to realize there’s still another game to be played, but we put ourselves in a good spot today without fully controlling our destiny.

“After the Ottawa game where things looked very difficult for us we responded with these two games against a direct rival to us (HFX) and now  coming in here and doing what we did says a lot about the quality and the character that the group has.

“As long as you’re not mathematically out you cannot stop,” Dos Santos added. “I’ve seen crazy things in football. So, that’s been our message. It’s been easy to pass it across. It’s always about how you step into the facility on a daily basis. If the coach believes and feeds that belief and the staff does the same, everyone that walks in the building on a daily basis carries that mentality then it’s easier for the players to still believe. That’s what we preach, that’s what we say. We say, ‘If people want to write us off or out of the playoff spot, then let them do it. We cannot approach the next few games with that in mind. We need to keep pushing and we need to keep doing our job and if we do that then maybe – maybe – good things are going to happen. That’s how we go about it.”