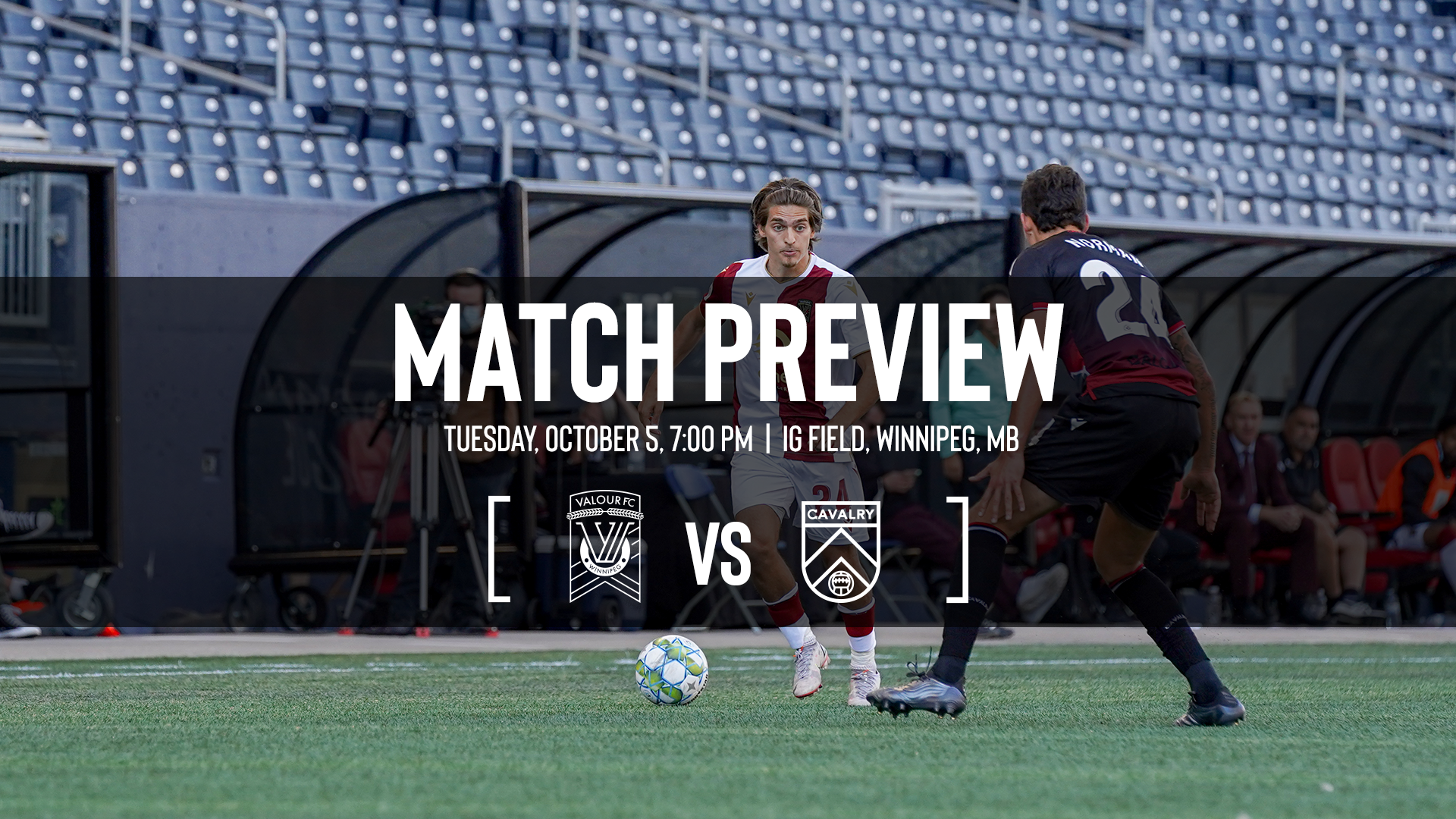 “We need to play with confidence and the mentality that we can win every game.” | Match Preview vs Cavalry FC
October 4, 2021

It was less than two weeks ago that Phillip Dos Santos was parachuted into Winnipeg as Valour FC’s new GM and head coach.

His to-do list instantly became as long as his arm – from meeting with players and staff, to getting a feel for the cards he’d been dealt, to chasing a Canadian Premier League playoff spot, to planning for 2022 and beyond.

The most-pressing priority as Valour continues a four-match homestand Tuesday night against Cavalry FC at IG Field is to get the squad back in the hunt for the fourth and final playoff spot.

At 7-3-11 following a 1-1 draw with FC Edmonton on Saturday, Valour remains in sixth spot – five points back of HFX Wanderers and six in arrears of York United FC, who currently hold fourth place.

It’s still within striking range, although there are only seven matches remaining and the club’s recent 1-3-10 run has only compounded things.

“I still think we have enough to make the playoffs,” Dos Santos told valourfootball.club on Monday after training. “I told the guys, ‘This looks like a mountain that is very big. But if we win a game where our direct rivals lose, then we’re then just three points behind.’ This weekend we didn’t lose points to our direct rivals (Wanderers and York played to a 1-1 draw on Sunday) and we stayed status quo. There’s still belief.”

That part has been critical in his assessment of his squad over the last few days. There has been improvement over his three matches at the helm, but what he wants to instill is a mindset that securing one point – like the one earned against Edmonton – can’t become an acceptable practice.

“That’s what the best teams do: they fight for the three points and don’t settle for one,” he said. “If you go to the top teams in the world, the gap between a team that spends, for example, $100 million and another that spends $500 million, that gap is big. Here, (in the CPL) the gap is small. 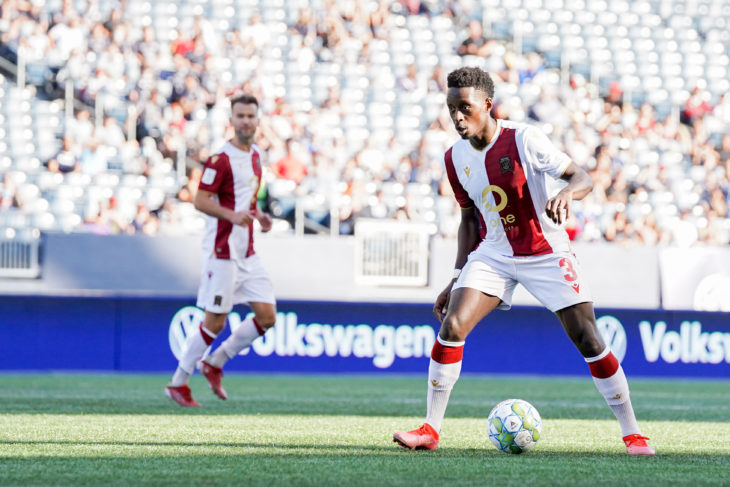 “We can’t go into a game thinking that we’re smaller, that we’re little. This is where I want to get. There’s a lot of parity and on any given day one team can beat the other. If you go into a game afraid of the opposition right away you’re limiting your chances. I want this club to have mentality where we don’t feel inferior as the others.

“It’s interesting,” added Dos Santos, “I remember speaking with Wade (Miller, President and CEO of Valour FC and the Winnipeg Blue Bombers) and the pride he has. The reality is you have a great football organization that has won and has built something to the point today where they’re winning.

“That organization knows what it is to win. We can learn and feed off that in that it is exactly what we want to build on the soccer side.”

After the draw with Edmonton on the weekend Dos Santos was asked about structures and in his answer stressed certain principles and behaviours he considered ‘non-negotiable.’

Asked to expand on that on Monday, he referenced the elements in Valour’s game that ‘are going to define our identity’; thing like how to defend the box, becoming a team that understands when to press and how it reacts to the loss of possession.

“People define ‘structure’ as a system, as if it is in a back four, a three-four man midfield… I don’t like to see it like that,” he said. “That’s only a base for everything else to come to life. People see the sport too much as a system-based. I see it as there is a base for you to then bring your ideas to life.

“We could change tomorrow because of any given situation, but our behaviour and our principles cannot change.” 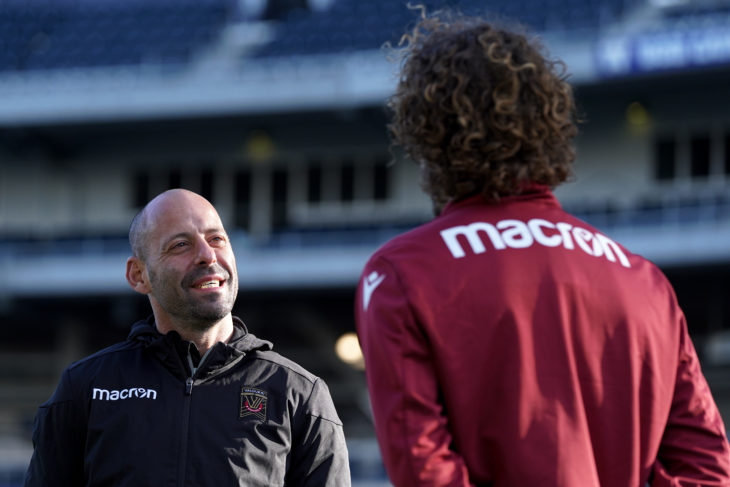 Valour is in the midst of a stretch that will seem them play four matches over a 10-period (September 26-October 5th), but the new boss has not seen any surrender or resignation among the troops.

“I see guys who are extremely committed to bringing what we ask of them,” he said. “I want the players to realize that I want a team with energy, an electric team with guys that look like they could go the whole game and still play a second game after. I want them to be aggressive on the opposition and being hard to play against. I think it’s fun for them.

“I was laughing with the guys, saying ‘You guys probably think I’m psycho asking you to go all the way all the time. But that’s the kind of team I want to have.’ I believe players are enjoying that approach, but I also do it in a way where I give them the freedom to express themselves.

“We’re asking a lot I see that they still want to go hard. If I do a rotation tomorrow of one or two guys they’re still upset and they tell me, ‘Coach, I’m good to go.’ That tells me a lot. It tells me they’re still enjoying the moment they’re in and going through this spell of games with a new approach. That’s encouraging to me.”