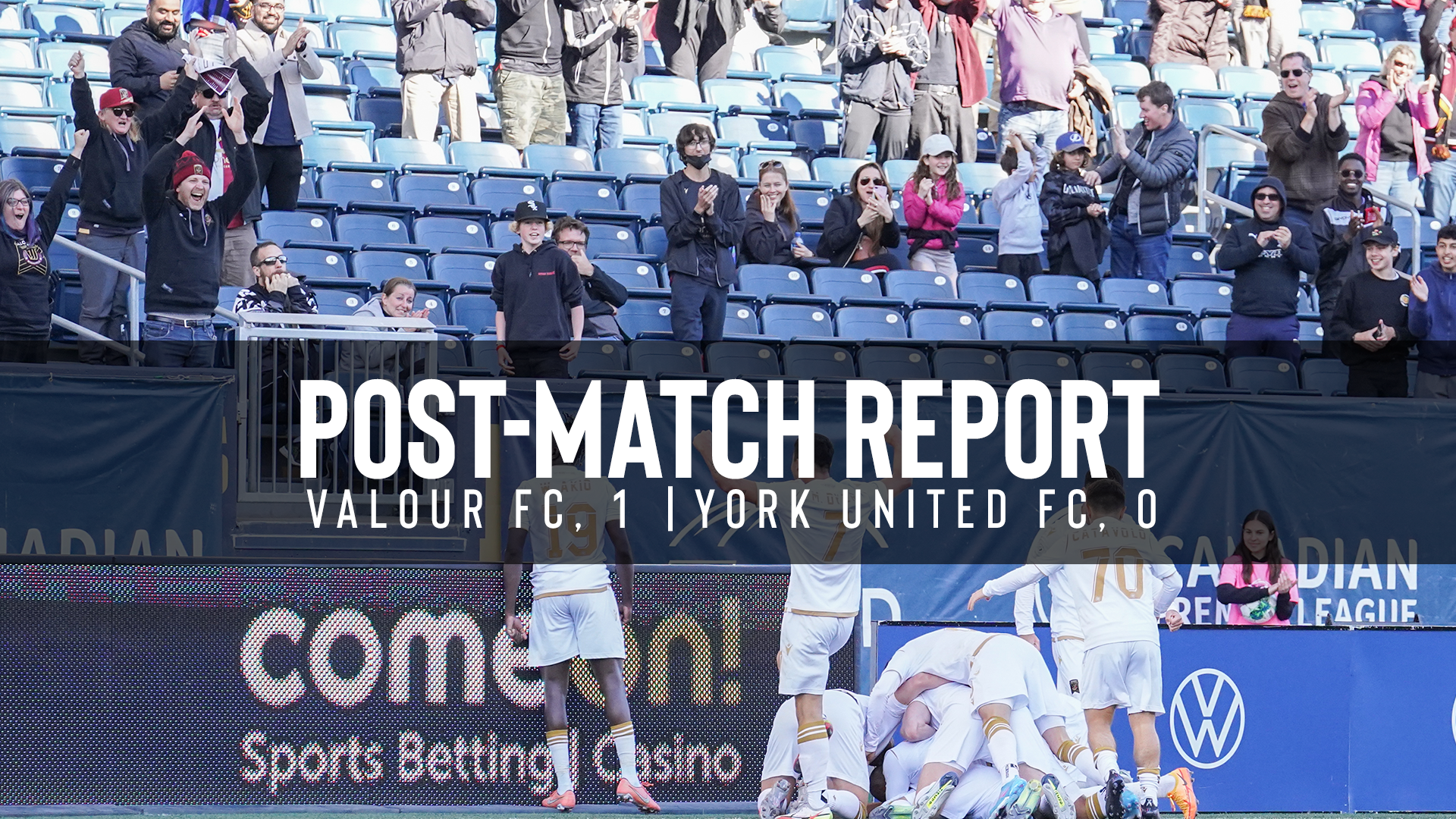 Some celebrate their birthdays with standard acts like blowing out candles on a cake and tearing open presents from friends and family.

And then there’s Valour FC midfielder Sean Rea, who celebrated his 20th birthday Sunday afternoon at IG Field by scoring a dramatic game-winning, goal-of-the-year candidate in the 87thminute for a 1-nil victory over York United FC.

The goal came as Rea niftily maneuvered through the York defence before blasting home a rocket from about 20 yards in what Valour GM and head coach Phillip Dos Santos called ‘an act of genius.’

“It was an amazing goal,” said Rea, who couldn’t wipe the smile from his face in his post-game media conference. “Honestly, when I saw the ball on my feet I saw three guys around me and I’m like, ‘How am I going to get out of this?’

“My body honestly just took over, I found a way out and I thought, ‘This is my chance’ and I just shot… left corner… and it went in. It was just a rush of emotions. It was just incredible.”

And when it was suggested his goal was a pretty good birthday present to himself, he grinned and added: “Yes, of course, especially at home in front of our fans with our team… I couldn’t ask for a better day.”

The win improved Valour to 2-2-1 – two wins, two draws, one defeat – and moved them into five-way tie for second spot in the Canadian Premier League standings, but with a match in hand on the four other clubs.

The result also gives Valour a chance to take a deep breath after what has been a heavy stretch. The last few weeks saw Valour have its initially scheduled home opener on May 1st versus Forge FC postponed due to COVID protocols, before returning to play HFX Wanderers to a nil-nil draw at home last Sunday, followed by a quick trip west to face the Vancouver Whitecaps in a 2-nil loss in the opening round of the Canadian Championship to Sunday’s dramatics against York.

“It was important to get this win,” Dos Santos said. “You’re going on the road for two very difficult games in Calgary (May 21st) and then in Pacific (May 28th). We get that draw against Halifax in a game we had to grind to get the point after the week we had spent (off) because of COVID. Then comes the Vancouver game… the reality is it’s a bit out of context. I can’t go crazy on that game.

“It shows a lot of the character of the team.”

Valour dominated in the possession numbers at 59 percent, but York had grabbed control of the match early in the second half before what was the other dramatic moment of the match outside of Rea’s heroics.

Valour was under siege when in the 54th minute Moses Dyer was called for a hand ball right in front of goalkeeper Jonathan Sirois. On the ensuing penalty Sirois dove to his right to block the shot of Osaze De Rosario and keep York off the scoresheet.

Incredibly, that was the fourth penalty in five chances Sirois has stopped dating back to last season when he earned the CPL’s Golden Glove Award as the league’s top keeper.

Only Alejandro Díaz has beat him.#CanPL

“That was a crazy save but, honestly, I had no doubt,” said Rea of Sirois, both of whom are on loan to Valour FC from CF Montreal of the MLS. “Jo thrives in these situations. When they called the penalty I was like, ‘We know Jo’s got this.’ He’s the one who kept us in the game. He gave the team a boost and we felt it. That’s what we needed to keep going, keep pushing and it paid off.