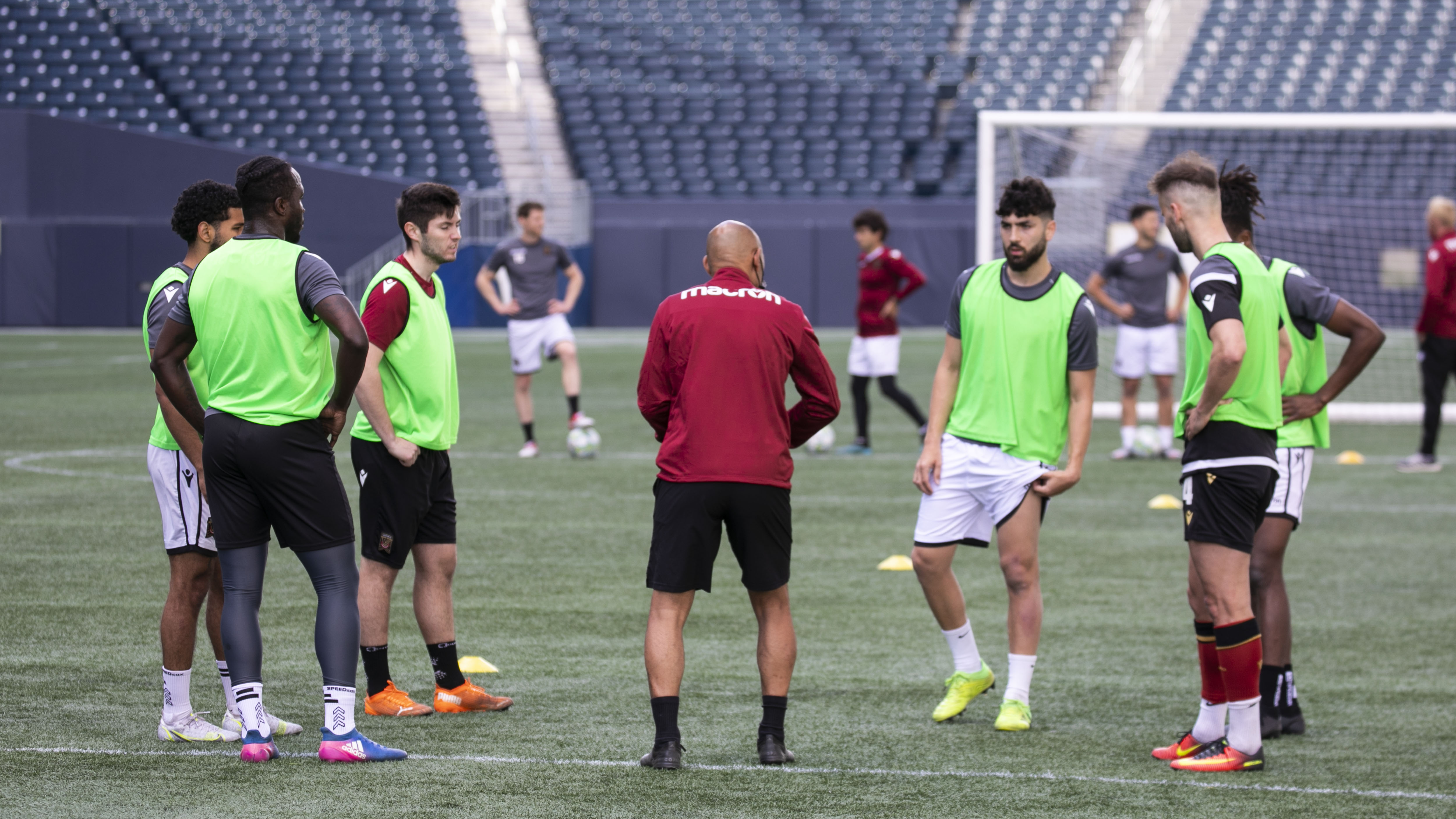 “But, in terms of profile, this is big.” | Valour opens week three of training camp with a new addition on the horizon
May 31, 2021

There’s an old expression that anybody can tear down a barn, but it takes a carpenter to build one.

We bring this up today as Valour FC opens Week 3 of training camp on Tuesday and with GM and head coach Rob Gale more than pleased with how the build is coming along for Winnipeg’s Canadian Premier League side.

Gale touched on a number of subjects in a conversation with valourfootball.club on Monday. Here are some of the key talking points…

Valour held a 70-minute intra-squad game on Saturday and the two sides played to a 2-2 draw. Masta Kacher scored twice for his squad, while Keven Alemán and William Akio found the back of the net for their side.

“It was nice to see attacking pieces scoring, even if it was just preseason,” said Gale. “You want them scoring whether it’s a training game, five aside or in a friendly match.” 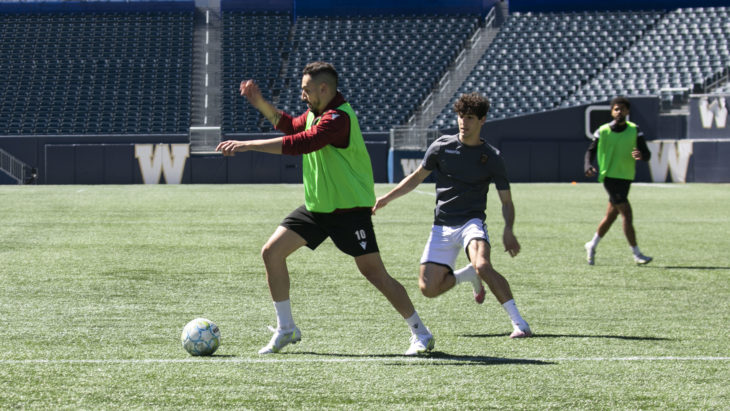 Three players who had opened camp in quarantine were on the pitch for the first time last Thursday in Akio, Andy Baquero and Alemán https://valourfc.canpl.ca/article/i-think-were-going-to-do-big-things-this-year-i-feel-very-strongly-about-that-aleman-impressed-with-squad-at-first-day-of-training.

Here are Gale’s impressions on the trio…

“Keven’s got great dynamics. I’ve worked with Keven before and he has an increasing in tempo when he drives with the ball that you really need as an attacking midfielder. He’s got that extra little burst. He’ll get bums off of seats, as we say, because it always looks like something is going to happen when he gets the ball.

“He’s still got to get his base because he came to us after his Costa Rican season ended in early May, so he hasn’t really been going for four weeks. He’ll get sharper, too. But he looked good and followed up in the game with a nice goal from the edge of the box.

“William is a really interesting prospect for us. He works incredibly hard, he’s got great speed and as we said before about him , he plays behind the back line and threatens those spaces. He’s willing to run and stretch the opposition and that’s a real important piece for us and a need.

“He, Jared and Keven were a handful for our back three against them.”

“We’re getting to know what his capabilities are. I think he could be a versatile piece and we still have to see if that’s exactly what we need for the squad positionally. But he’s got obviously technical ability, he’s vastly experienced with international teams in Cuba. He’s an interesting player.”

Gale has hinted before and through camp that the club is hoping to add at least one new piece, especially after visa issues will keep Néstor Monge and Ronny Maza from coming to Canada.

An announcement of a new signing could come as early as this week.

“I don’t want to build it up too much and over-promise because we don’t know his physical condition, and he’s got to go through quarantine. But, in terms of profile, this is big.”

The details of the where and when have yet to be made official by the CPL, but the ’21 season is scheduled to start in a bubble. Unofficially, each team would play eight matches in the bubble and, fingers crossed stadiums open across the country, then complete the balance of a 28-game schedule after that.

“There were two things that led to this,” said Gale “Number 1, having experienced the bubble last year (with the Island Games in Prince Edward Island) the players and staff will be mentally prepared. It’s quite gruelling.

“The exciting part of it this year is knowing that there is something coming after it and that there will be a full season. It’s not just seven (matches) and done.

“All the teams will be at different levels — Ottawa has had a full preseason with exhibition games, then you’ve got us who started late, York, Forge and Halifax who started, stopped and have restarted… it’s going to be a challenge in those first few games. It will be like a preseason and teams try to get continuity and find their rhythm as quickly as we can. Then you hope the four teams – Pacific, Ottawa, Edmonton and Cavalry – aren’t that much further ahead with the preseason they’ve had.

“The beauty of the 20 games after (the bubble) is it will give us the time to find our form and identity as a team. We need to do that as quickly as we can.”

It’s not too often – heck, it’s rare – when you can stump Gale with a question. But, asked for his thoughts on if any players had surprised him through the first two weeks he paused for a long stretch before offering this:

“That’s a qood question. I would say in the game that Jared (Ulloa) was a pleasant surprise because he showed some real dynamics. It’s one thing to show it in training, but he did it in the game. Plus, he’s still trying to get used to the language and our game model. He’s showed some great dynamics in the game, as did William.

“We’ve said before we want to be a threat with some pace and the ability to stretch and hurt opponents in behind. The early signs were good from that. I’m not sure you would call it a ‘surprise’, but we were happy with what we saw.

“Also, Sean Rea has been a breath of fresh air in terms of how bold and positive he is on the ball. He has all the qualities we look for in a football player for such a young lad. He’s a very welcome addition.” 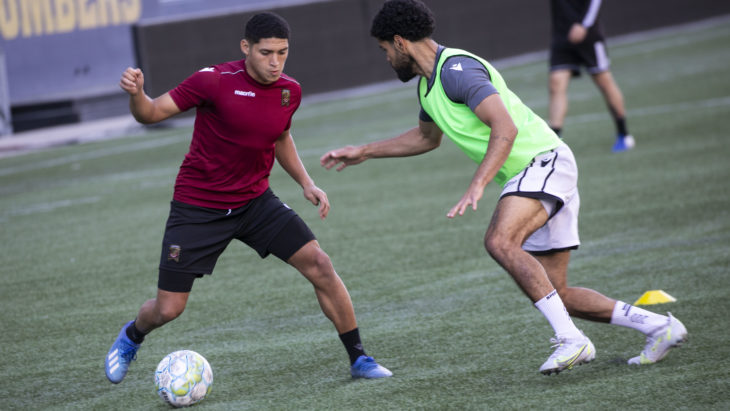 INCHING TO A STARTING XI

The start of the CPL season is still weeks away, but Gale said later in the week the club will likely reduce its camp roster.

“We need to get the training squad down,” said Gale. “It’s great (to have numbers) early – even with two or three injuries we still managed to get 22 on the field (for Saturday’s intra-squad game).

“But as we get closer to the bubble you really want to hone in on the group that you’re going to be working with through to the summer transfer window.”