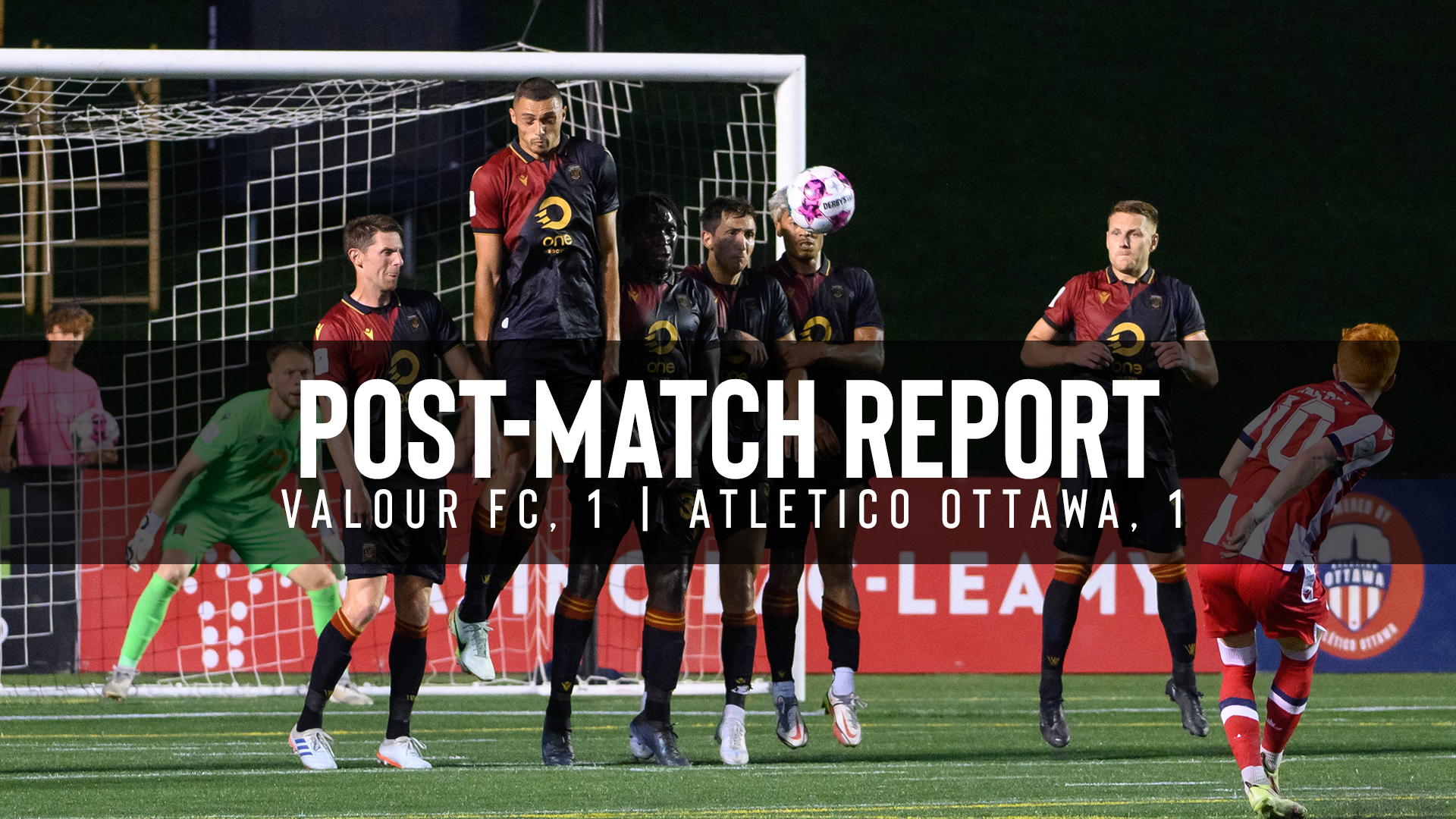 “You have to adjust. You have to be ready to adjust and not have any excuses. We need to go and play the next game and respond every time we play.”
July 20, 2022

It will officially be entered into the ledger as a road point for Valour FC, and a critical one as the club hits the halfway point of the 2022 Canadian Premier League season.

Valour and Atlético Ottawa played to a 1-1 draw in the nation’s capital Wednesday night and the point is massive in the club’s quest to hunt down the four teams ahead of them in the table for one of the playoff spots.

But given some extenuating circumstances – with the match rescheduled from Sunday due to COVID protocols concerning Atlético Ottawa and the team’s initial travel plans scuttled as a result – this road point in has a few more layers to it.

“I think if I elaborate on that it could come across to many people as an excuse,” began Valour FC GM and head coach Phillip Dos Santos in a post-match Zoom availability. “So that’s what I have to say. The games are played when they’re played, and we have to respond. Travel was difficult. You go from a direct flight to suddenly having to scramble for everyone to get here in a proper time.

“But for me the biggest thing is we wanted to get this game out of the way and it’s the fact we’re playing 60 hours from now (Saturday afternoon in Hamilton against Forge FC). That’s the biggest factor. It doesn’t just affect preparation for one match, but also for the second match because we were meant to play that game in Hamilton with fresh legs.

“You have to adjust. You have to be ready to adjust and not have any excuses. We need to go and play the next game and respond every time we play.”

The result means Valour is now at 5-5-4 (wins-draws-losses) for 20 points – thee back of fourth-place Forge. It also extends Valour’s unbeaten streak to a franchise-record four matches, with three wins and a draw over that span.

With Valour trying to extend that streak and Atlético Ottawa pushing to the gap on first-place Cavalry FC – they are now two points back of top spot – the match had all the intensity of a late-season showdown.

Both goals came within the first 15 minutes of the match, and both came from the penalty spot.

Moses Dyer opened the scoring with his sixth goal of the season – and league-leading third from the spot – after a handball in the box in the 10th minute.

But less than five minutes later Valour captain Andrew Jean-Baptiste was nailed for a similar infraction with Vladimir Moragrega beating Jonathan Sirois from the spot on a shot the goalkeeper got a foot on but could not deflect over the bar.

Ottawa did have two dangerous chances in extra time but could not find the back of the net.

“We carry momentum. The team is in a good place,” said Dos Santos. “Every game is important. I look at the tendencies of the top teams not losing games and they lose points when they play against each other.

“We go one game at a time. This one is over and now we start focussing on Forge. We have to play with the responsibility that all games become finals, even though we’re at the halfway mark, because it raises the intensity of the team.

“But we also need to know there’s a lot of football yet to be played and things could shift for everyone. Everyone has gone through tough patches and difficult spells, so we have to keep doing our job and keep getting points and keep pushing.

“And if we do our part, because we still play everyone multiple times, we’ll be in there.”

Wednesday’s match was the first for Valour since the departure of midfielder Willy Akio to Ross County FC of the Scottish Premiership. Dos Santos was asked about that after the match.

“These things are natural in football,” he said. “I spoke about Akio in the pre-game, I speak about Akio now, but it’s going to be the last time I speak about Willy because he’s no longer our player.

“Danny (Ascanio, who replaced Akio in the starting 11) needs more rhythm. He came in the game well and I think in the first 45 minutes he was a handful every time he would get on the ball. There’s someone that needs to step up and respond without Willy and today the team played well.

“… With Willy, we like him, he did a lot for our club but the chapter has turned, the page has turned.”