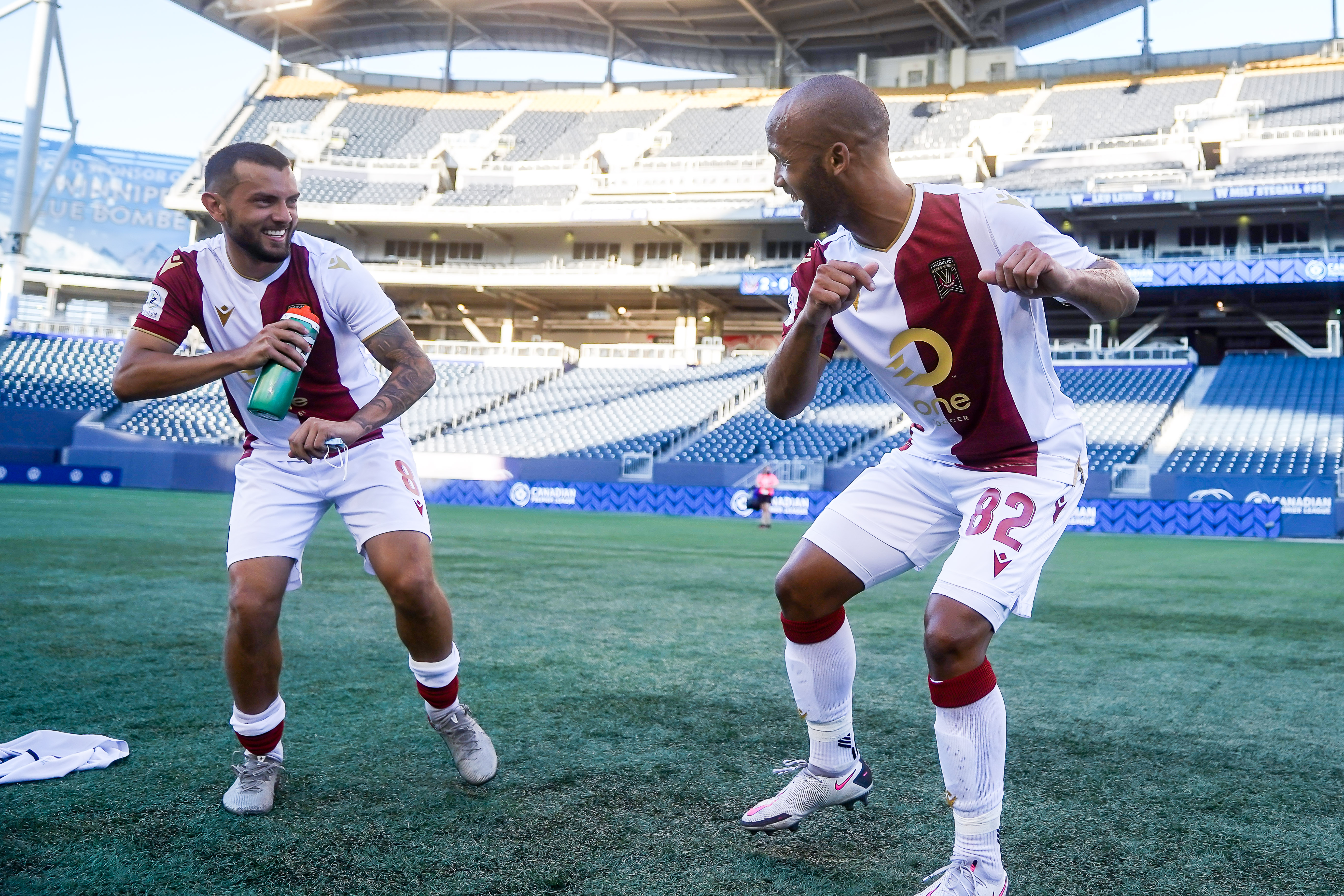 June 30, 2021. Valour FC vs. HFX Wanderers FC. Post-Game. Keven Alemán and Andy Baquero do a celebratory dance following a 2-0 Valour FC victory.
“I’m glad this year we’re coming out with more presence and showing people that these are not the players you think you can write off.” | Valour FC 2, HFX Wanderers FC 0
June 30, 2021

It’s much too early in the Canadian Premier League 2021 season to come to any concrete conclusions about any of the teams in the ‘Kickoff’ event to open the campaign.

Still, there is this to say about Valour FC, now unbeaten and untied after two matches, with both of them featuring clean sheets: this franchise is very much taking an important step in front of everyone’s eyes.

Occasionally competitive but often pushed around in critical moments in their inaugural season back in 2019, the squad morphed into a solid defensive unit at last year’s Island Games.

And now, based on the first two matches – including Wednesday night’s 2-nil victory over HFX Wanderers FC – it seems Valour FC has evolved into a squad that has certainly become a topic of conversation through the first five days of the Kickoff.

But… shhhh… they’d prefer to continue to play the role of underdogs going forward.

“We just kept two clean sheets, it’s nothing more than that,” said Valour FC GM and head coach Rob Gale after the club posted consecutive wins for the first time in its history.

“… Sometimes you get the rub of the green and sometimes you don’t. I don’t think we’ve been that far off. But – and here’s your quote everybody – there’s a general chip on their shoulder, we’ve got a bag of potatoes. They want to prove everybody wrong and winning silences the noise and silences the doubters.

“Sometimes it doesn’t matter how you do it. It’s the deodorant of football, winning, isn’t it? It covers all matter of smells. Nobody’s worried about the manure underneath, they’re just looking at the rose.

Valour was full credit for the victory, but the Wanderers also looked to have scored an equalizer after Andrew Jean-Baptiste headed home Keven Alemán’s corner in the 20th minute when Alex Marshall’s attempt hit the crossbar and then bounced off the turf, seemingly behind the line.

The Wanderers pressed for the equalizer into the second half, but rookie goalkeeper Jonathan Sirois stood tall in the Valour net, saving his biggest save off HFX’s Eriks in the 81st minute.

That was then followed by William Akio’s first goal as a professional in the 89th minute when he buried a brilliant pass from Jared Ulloa before celebrating with a backflip.

GOAL 🎖🎖@ValourFootball make it 2-0 over @HFXWanderersFC as YouTube-err…. forward* William Akio gets his first in #CanPL 💪

The Valour back line was steady in front of Sirois, and especially dominant was Jean-Baptiste.

“He could be playing at a higher level,” said Gale. “I look at some of the defending in the MLS and I think, ‘How is this boy not on that platform?’ That’s not an invitation for anyone… I got two teams south of the border asking about Raph Ohin just as we came into the bubble, too, so keep your hands off. ‘The Beast’ (Jean-Baptiste) and ‘The Rhino (Ohin) like Winnipeg. They are absolutely monumental to us.”

Asked afterward if the team has been rallying around the doubters and critics heading into the season, the team’s co-captain didn’t mince words.

“A lot of guys on this team have been written off by a lot of people. That’s fine, because every day we get to go on the field and shut them up. So, the feeling of doing that with results and performances is the best way of going about it. People keep coming up with these mock drafts for who is going to win the league and who is the top players at each position. For us it’s like, ‘Hmmm… none of us are in there? That’s fine.’ It just motivates the guys on our team to go out there and shut them up.

“I’m glad this year we’re coming out with more presence and showing people that these are not the players you think you can write off.”