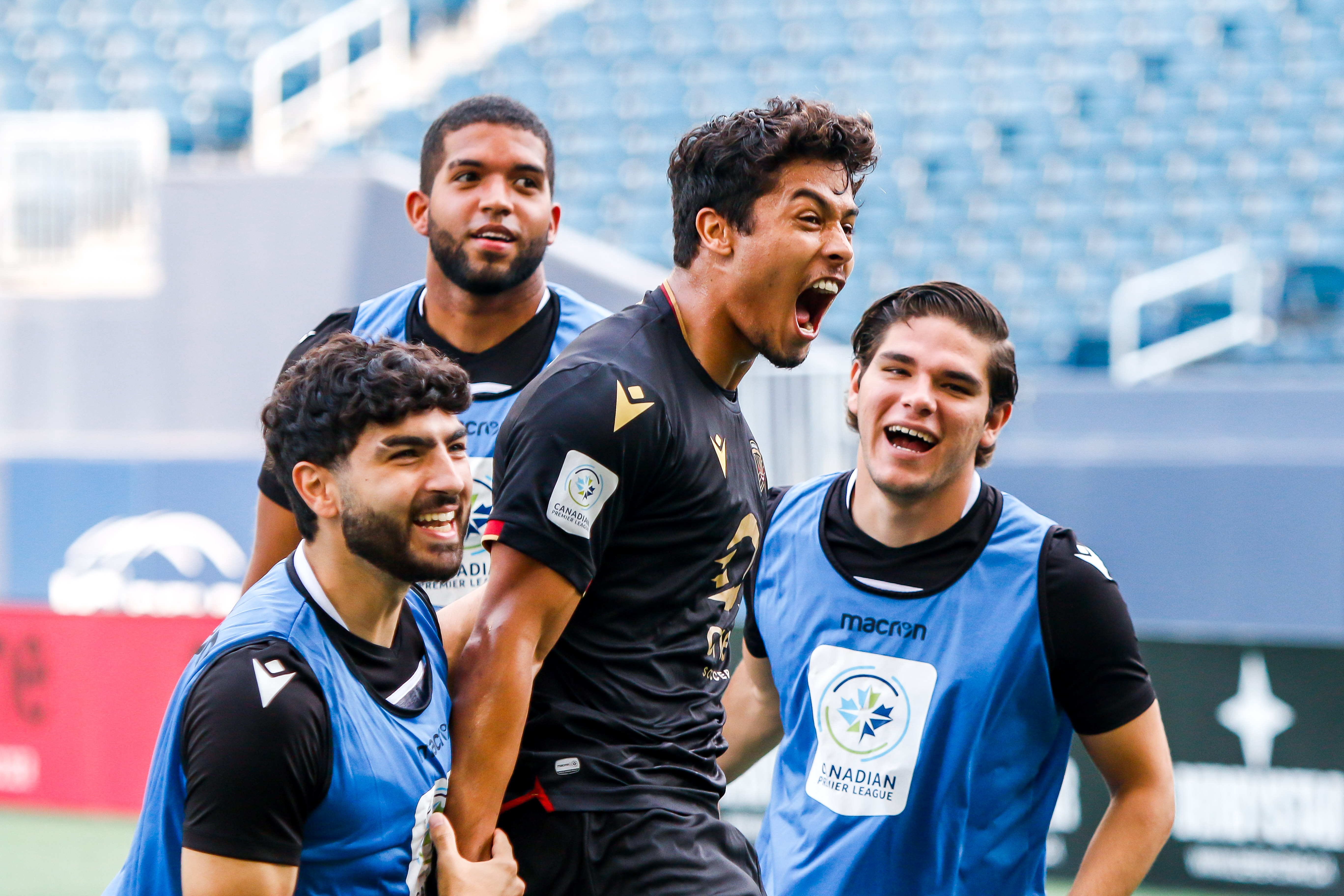 July 15, 2021. Atlético Ottawa vs Valour FC. Second-Half. Moses Dyer of Valour FC celebrates with teammates after scoring a second-half goal.
“It’s continuing to keep our foot on the throttle to create these chances and believe that we’ll find a way to win.” | Valour FC 1, Atlético Ottawa 0
July 15, 2021

Given the gut-punch that came last Sunday afternoon – not with his own squad winning that day, but with his beloved England falling to Italy on penalties in the Euro final – no one would have held it against Rob Gale if he had closed his eyes and plugged his ears in the critical moments of Valour FC’s match Thursday night.

Or, at least, turned his back to the action and knocked off a quick prayer to the soccer gods.

Locked in a nil-nil draw with Atlético Ottawa into the 84th minute in their sixth match of the Canadian Premier League’s ‘Kickoff’ event at IG Field, Valour FC’s late pressure led to a penalty-kick opportunity when Ottawa’s Miguel Acosta was called for a hand ball in the box.

Up stepped Moses Dyer, who calmly buried his third goal of the young season – all on penalties – to help Valour secure its fifth win in six games and remain atop the CPL tables with a 5-0-1 record.

Advantage, @ValourFootball as Moses Dyer tucks home a penalty to give his team a 1-0 lead over @AtletiOttawa with just a handful of minutes remaining in this match-up

“If you’re an Englishman and you score a penalty, you’re happy because it isn’t our greatest strength, is it? So, thank goodness for the Kiwi,” said Gale of Dyer, his New Zealand-born attacker. “We’ve got a few penalty takers – William Akio, (Rafael) Galhardo, Austin Ricci have taken penalties throughout their careers, as has Moses.

“It’s something he practises, he works on it and they like to do it at the end of training like most players. They have free kicks and penalty kicks when we’re trying to get them off their legs, but they’re still messing about. So far it’s paid off. Let’s hope he can continue to find the net when we get those opportunities.”

The goal was Dyer’s fourth since signing with Valour last season, three of them on penalties. Asked about his stutter-step approach which he’s used on all three penalties, Dyer wasn’t about to reveal any secrets.

“I don’t always do (the stutter-step),” he said, a grin forming on his face. “Sometimes I do it, sometimes I don’t. It’s just… I can’t really say anything about it. I don’t want to give anything away.”

In a match in which both squads took turns dominating possession before those numbers ultimately settled at virtually even – 50.8% for Valour to 49.2% for Ottawa – Valour did manage six shots to AO’s three and was pushing for the three points and not sitting back when it mattered most.

“I thought we’d find a way to win,” said Gale. “We had more shots, we created more chances, we got in behind and I felt we a couple of shouts for potential penalties in the first half.

“It’s continuing to keep our foot on the throttle to create these chances and believe that we’ll find a way to win. I felt with the longer the game went on and with the subs we had, we could turn the screw and find a way to win and luckily we did.”

Not to be overlooked in the victory was Valour’s defending backstopped by goalkeeper Jonathan Sirois, who built on his CPL record run of now five consecutive clean sheets.

Going where no other #CanPL goalkeeper has gone before

With today's result, @ValourFootball's @josirois1 makes it a CPL record 5 clean sheets in a row 🛑 pic.twitter.com/BkzBJOn28D

“What can I say about Jonathan?,” said Gale. “He’s kept five clean sheets in a row. He came and collected the high one late in the end, he takes the pressure off the defenders when he needs to… again, it’s front to back. If you’re only allowing an Ottawa team three shots on target in 90 minutes then it’s a collective effort. Credit, absolutely, to Jonathan but also to the 10 men in front of him.”