Garcia and Dyer in a ‘Stepbrothers’ friendship
April 16, 2020
News

Sitting on opposite sides of their apartment living room, Raphael Garcia and Moses Dyer take turns shooting balls at their two mini basketball nets in a game they call ‘fun shot.’

They each get three shots and whoever sinks the most baskets wins the round.

“Every time I win,” Dyer said with a laugh. “Sometimes we do a handicap… now it’s getting too easy, so I have two shots and he has three shots and we’re going to have to go down to one shot for me and three shots for him.”

‘Fun shot’ is just one of the ways these two Valour FC teammates have been spending their time with the Canadian Premier League delayed. But the duo didn’t know each other before moving into their apartment this winter. Dyer signed with Valour FC in February and Garcia was looking for a new roommate since his former roommate, Glenn Muenkat, is no longer with the team.

“I was like, ‘Yeah, why not? I’m looking for a partner as well.’ So we started looking at what kind of apartments we could be in,” said Garcia. “He got in a week earlier, so he got the good bedroom. And then when I got in, we met right from the start and we got along really well.” 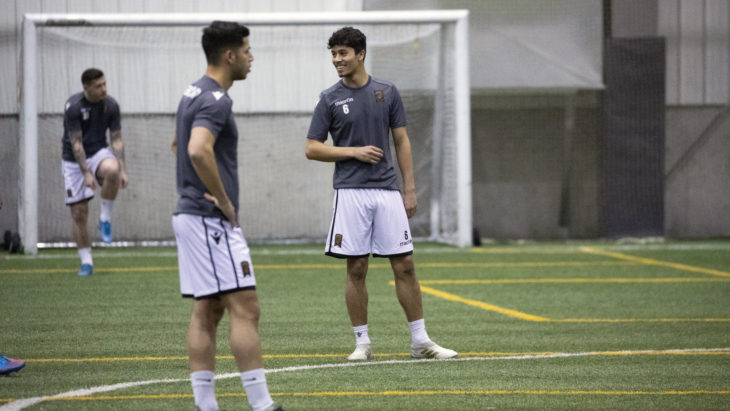 Their Valour teammate, Andrew Jean-Baptiste, wasn’t too sure about the roommate situation and compared it to a “Tinder blind date,” since the two had never met before moving in together.

Jean-Baptiste said it took only 48 hours and two training sessions for him to see the partnership would work. He said they acted like best friends, would bounce their energy off each other and compared their friendship to the the main characters in the movie Step Brothers.

Their relationship has evolved since being in isolation together, and Garcia said where he lacks in ‘fun shot’ skills, he makes up for in video games. Garcia is the one carrying their FIFA team. They started a FIFA career mode with Sunderland A.F.C., trying to move them all the way up to the Premier League with only academy players. When they first started the game, Garcia said they would spend entire days developing the squad, but now they average an hour or two a day.

The Valour FC players may not be able to celebrate goals on the pitch right now, but when they score in FIFA, the celebrations are just as big.

“I might celebrate harder; I feel so attached to my boys,” said Dyer.

“Especially when our favourite player scores, we will get up off the couch, and give a big hug when it’s an important goal or a big final goal,” added Garcia with a laugh.

The celebrations are loud, but the duo said they aren’t worried about noise complaints because their neighbour plays the piano from 9 a.m. until 10:30 p.m. with just an hour break throughout the day.

When they aren’t playing video games or shooting hoops, the pair is on the couch binging Netflix shows — most notably, Netflix’s newest dating show, Love is Blind. There isn’t a lot the pair don’t like about each other, but sometimes they’ll sit down to start a show and Dyer will go call his girlfriend. Six hours later, Dyer still hasn’t come back and Garcia gives up and goes to bed.

But the differences between the two really show when it comes to eating: They agreed Dyer is the better cook, but he’s vegan, cooking a lot of pasta, rice, beans and meat alternatives.

“He’s trying to get me onto this vegan lifestyle,” Garcia said with a laugh.  “So, I’ve been trying it out, it’s alright sometimes and the rest of the time is me trying to convince him to take a bite out of my pepperoni pizza.”

Dyer said being in isolation has been the hardest period for him in terms of sticking to his diet.

Jean-Baptiste affirmed Garcia and Dyer can be funny in group chats; they don’t talk much in those chats, but when they do it gets people laughing.

“The audio will go on and we’ll say things we thought would be muted and the whole group hears,” added Garcia.

The pair can’t wait to start playing football again — they’ve been watching a lot of old soccer games in the meantime, including a lot of Lionel Messi games from when the star player was 19-20 years old. They miss playing, but they also miss the little things that come with the CPL season.

“Just training as well,” said Garcia. “At first, we were like oh that’s kind of cool it’s like we’re on vacation. Then you get maybe a week in and you’re like I really miss training now, even running, let me run. We just miss everything about football right now.”

The Valour teammates will be ready for the CPL season, whenever it begins, but for now they’ll train at home, play ‘fun shot,’ and continue celebrating their FIFA goals.