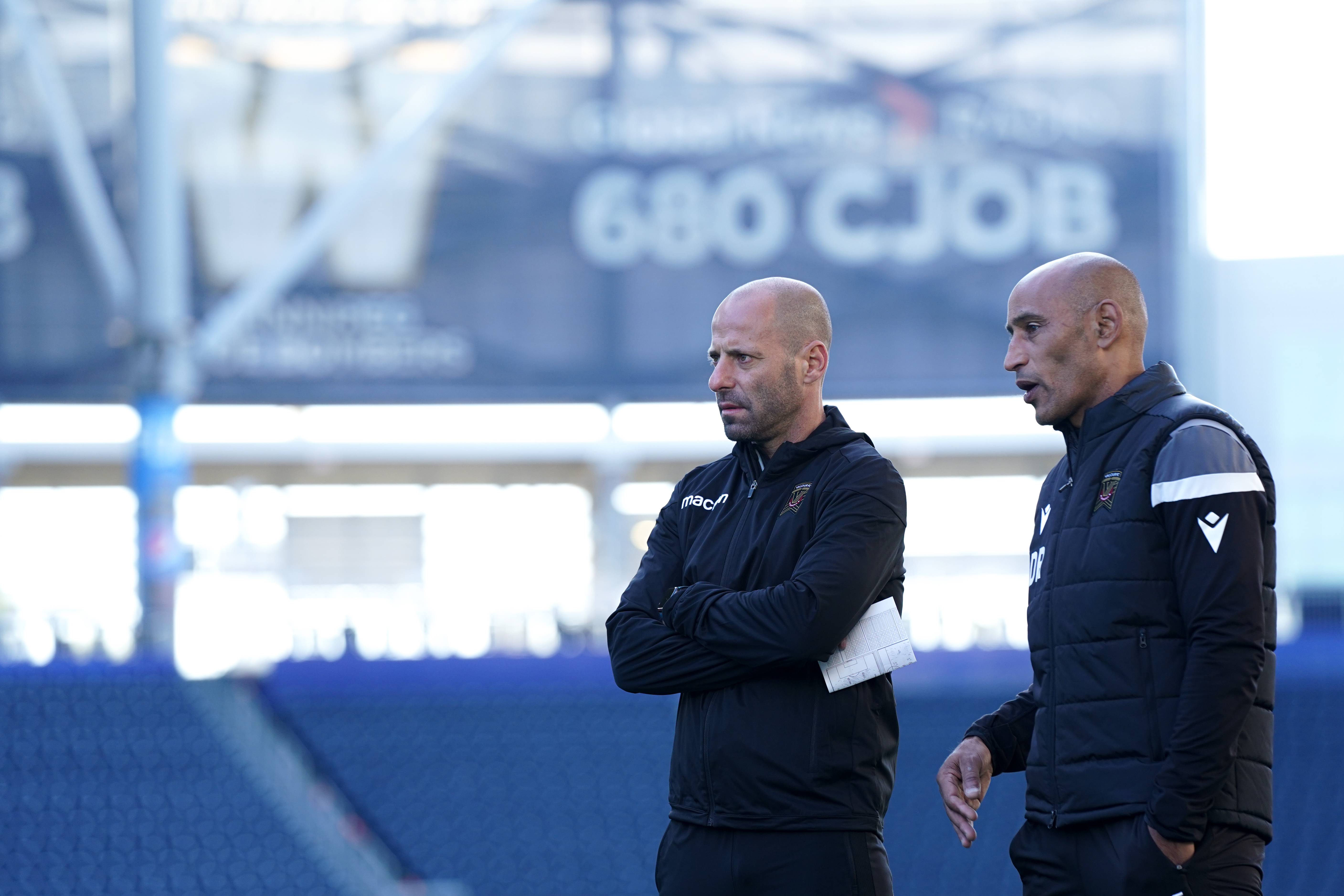 “I want continuity and players who relate with the fans and the organization because that’s how you build a culture and a locker room.” | Valour FC: Year in Review
December 29, 2021

Not a single day goes by without all of Phillip Dos Santos’ synapses firing and the cogs in his brain whirring with ideas about everything Valour FC.

New Year’s Eve will mark his 100th day on the job since parachuting in as the Canadian Premier League’s new GM and head coach mid-season. And, truth be told, he’s had his head down for so long since taking over on September 23rd – at the same time relocating his family from Vancouver – there are times when it must feel like he is just getting started AND like he’s been at the gig for an eternity.

So, ‘whirlwind’ doesn’t even begin to describe his three months-plus in Winnipeg.

Dos Santos spoke recently with valourfootball.club for our Valour: Year in Review piece and said atop his to-do list when the calendar flips to 2022 is to finish finalizing the roster.

The goal is to augment a lineup that went on a run at the end of the season but ultimately fell one point shy of the first playoff berth in the franchise’s existence.

The announcements of signings are already trickling in, with Andrew Jean-Baptiste Stefan Cebara and Raphael Ohin all back on board, along with Diego Gutiérrez, who returns to the club after playing here in 2019-20. 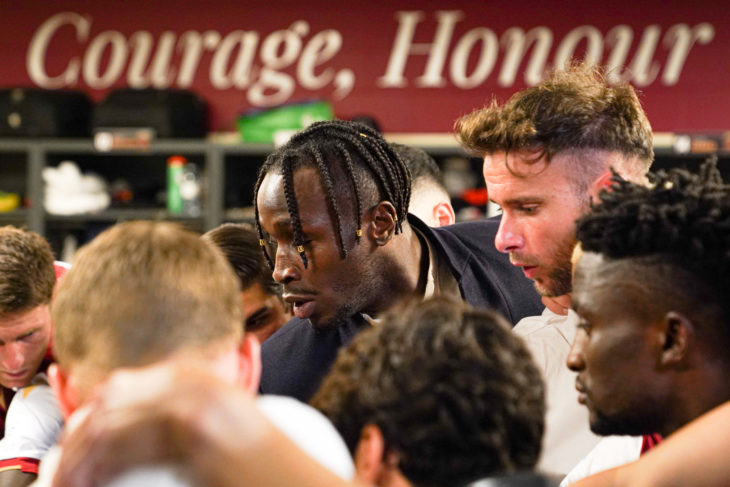 There’s more in the hopper, too, as many players as possible in Winnipeg for the opening of camp in mid-February.

“We have a good core that brings stability coming back,” said Dos Santos. “I was showing our board to our staff the other day: if we have a game tomorrow, we would already be able to fill a good starting 11. The question here is we need to get better. This is a team that hasn’t been in a playoff spot for three years now and we all want to compete with the teams that have been at the top for the first three seasons in the CPL.

“We’ve shown we can compete with them on any given day, but now it’s about having that consistency that will allow us to accumulate enough points to be in those top positions at the end of the year. Sometimes you can be two or three players short because it’s about bettering the team at better positions and bringing more stability at certain positions.

“We’re very happy with where the roster is, but there’s areas we absolutely need to grow.”

Continuity is key, especially as Dos Santos & Co. have studied what has made powerhouse teams like Pacific FC, Forge FC and Cavalry FC successful through the first three years of the CPL. Professional soccer is a transient business, but it’s important to have players who not only want to be in Winnipeg but are eager to help build the Valour brand.

“We’ve worked a lot in the month or so. It’s a challenge and I have to realize we can’t do everything in one transfer window,” Dos Santos said. “It’s about bettering the team piece by piece. We also want to do it without jeopardizing continuity and our foundation that has allowed the team to finish the season with what I would have considered a playoff run.

“It would have been easy to come in here and just say, ‘OK, let’s move on’ but it’s hard to sign players and it’s hard to sign the right ones. We feel there is a good core here. I want continuity and players who relate with the fans and the organization because that’s how you build a culture and a locker room.”

Dos Santos also stressed this in his effort to improve the Valour lineup: he isn’t interested in players who will simply fill out his roster card.

“I can tell you this: every player we have targeted is someone who is currently playing for their team,” he said. “They’re starting, they’re accumulating minutes, so it’s not like we’re going after players that are loose or out of contract or are not playing minutes. These are good players with options and they’re hard to get. It’s not a one-day negotiation with them. There’s a process to it.

“Signing good players takes time,” he added. “The first 90 percent is easy, the last 10 could take a long time and might not happen. In this business your first option might not be the one you end up nailing. That’s just the nature of the business.”

Valour has had success in landing talent via loans over the last couple of years, securing goalkeepers Jonathan Sirois and James Pantemis (2020) and midfielder Sean Rea from CF Montreal and centre back Julian Dunn and midfielder Dante Campbell ( both in 2020) from Toronto FC.

And as good as Sirois, Pantemis and Dunn were, in particular, the approach may be salary-cap friendly, but is hardly a prime method for roster construction.

“That has to be our mindset building the team,” Dos Santos said. “Of course, when you look at a player like Jonathan, if he’s coming back to play minutes for this club and he would be in the pole position to be starting for us.

“But in the build of the roster I cannot expect to rely on a player that we don’t control his destiny. We already expressed our interest with CF Montreal of having a player like Jonathan back, but at the end of the day he is one of their players and he will be in their MLS preseason. Even though we’re very confident based on our talks that the best thing for him would be to play another season and valuable development minutes anything could happen like an injury to one of their goalkeepers or he gets there and he’s better than everyone. We never know.

“It’s case by case. When we’re looking at an international loan, we need to make sure we’re adding value. We really feel it needs to be someone who adds value and elevates the quality of the team. I didn’t work enough with Rodrigo. He was a hard-working kid. But I think we have Canadian talent that maybe would have allowed us to fill that position.

“Plus, we need to continue to do our part in the development of Canadian players. We can’t say this is a league built for that and then not play our role in it. I’m very aware of that.

“There’s also a case of adaptation. It’s easier to bring in a Canadian player and have him integrate the squad and adapt to everything around the league and the city. It’s just easier. When we’re talking about those loan players, we want a quick and easy adaptation to the environment.”

Bright spots: Valour opened the 2021 season in the ‘Kickoff’ bubble here in Winnipeg and cranked out six wins against two losses in its first eight matches.

The club also made a late-season playoff push under Dos Santos with two wins and a draw in its final three matches. Overall, the club was 3-3-4 under the new boss.

Awards: Valour GK Jonathan Sirois, on loan from CF Montreal, won the CPL’s Golden Glove Award as the Goalkeeper of the Year.

The 20-year-old Quebec product led the league with nine clean sheets and saves, with 94.

Winger William Akio also won the CPL Fan Award for Goal of the Year and for Best Celebration with his trademark flip.

Goals galore: Valour had struggled to score in its first two years of existence, but finished with 38 goals in 28 matches this season – third most in the league behind 2021 champion Pacific FC (47) and runner-up Forge FC (38).

Lowlight: Valour’s positive start and strong finish book-ended a midseason stretch in which the club had just one win and one draw against seven losses in a nine-match stretch that ultimately cost GM and head coach Rob Gale his job.

Ouch: Every team deals with injuries in a season, but Valour lost co-captain and dominant defender Andrew Jean Baptiste early in the year, before the ‘Kickoff’ bubble was complete. Ditto for Austin Ricci, who had been the club’s leading scorer, who was injured in a Canadian Championship loss to Forge FC in mid-September and did not return to the lineup.