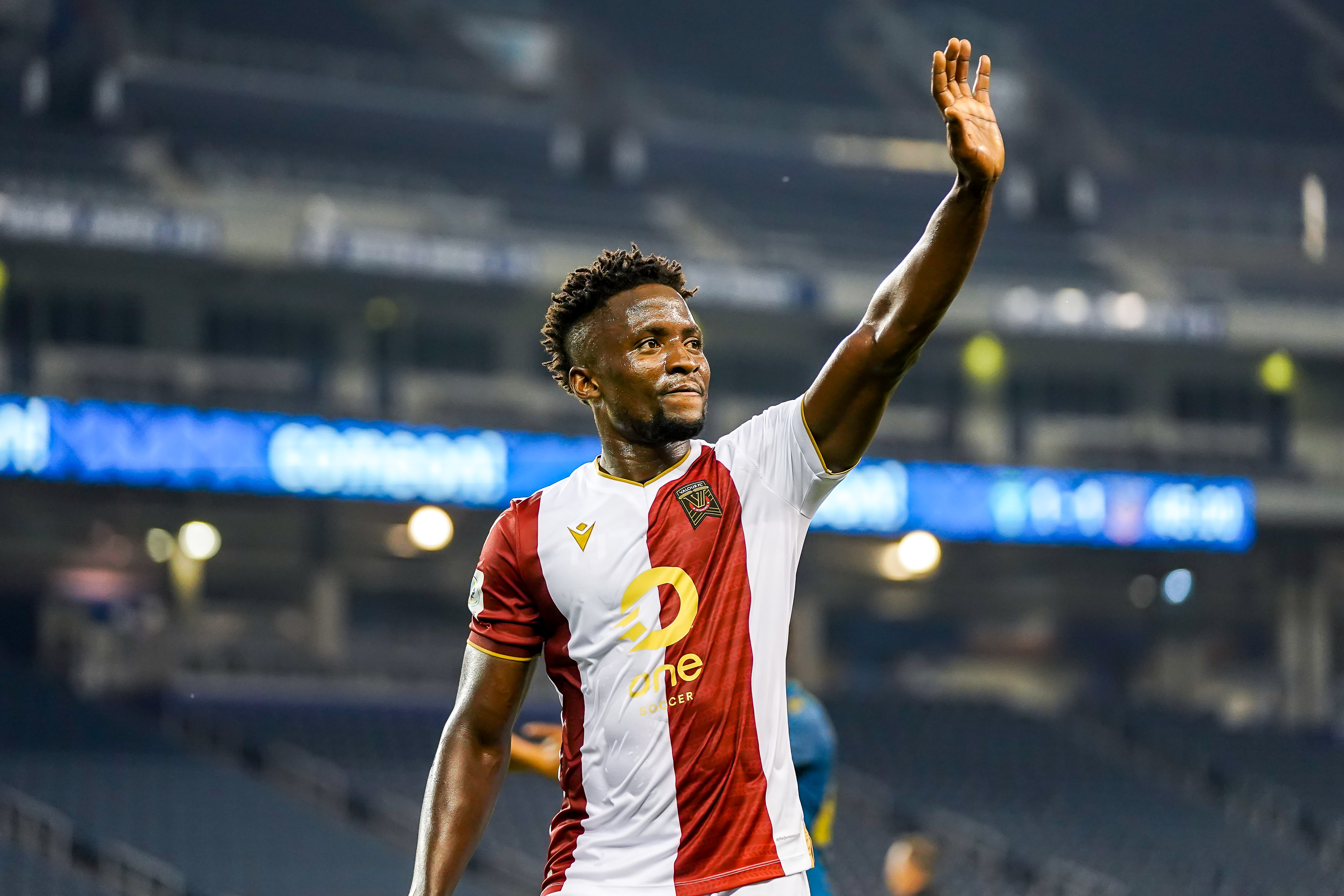 The components for a dandy script were all there for Valour FC: an unbeaten home side playing in front of fans for the first time and with goalkeeper Matt Silva making his debut against his old squad.

It turns out York United FC had their own story to write, however, and they crafted a dandy in a 2-1 victory over the home side in a match that wasn’t without some controversy.

Full credit to York United for the three points, but a potential late game-tying goal by Rafael Galhardo in the 83rd minute was waved off by referee Yusri Rudolph as he ruled that Andrew Jean-Baptiste was within a yard of the York wall, set up just outside the 18-yard box.

“That’s what he (the referee) said… he said you’ve got to be a meter (away),” said Valour FC GM and head coach Rob Gale. “I’ll have to watch it back… I want to see where the wall was and then there were the two players beside who were pushing (Jean-Baptiste).

“Then he said he blew the whistle and he blew it before he kicked it. So, if he’s blown it before he’s kicked it to stop the argy-bargy, I’m not too sure why we didn’t get another chance at it.”

That said, for as much as Valour pressed late to try and get the equalizer, their finish in the final third was lacking as they managed just one shot on goal – a Jean-Baptiste header on a superb corner by Keven Alemán.

That is, indeed, how we DREW it up.

“We didn’t execute in the final third,” said Valour midfielder Stefan Cebara. “We could have been better in the decision making when we were closer to the net. We should have moved the ball a little bit quicker from side to side and go with the gameplan, which was to go down the wings and create chances from there.

“We didn’t do that tonight.”

The loss drops Valour FC to 3-0-1 in four matches – one point up Cavalry FC, at 2-1-0 now the lone unbeaten side in the Canadian Premier League.

York United picked up its first win to improve to 1-2-1.

Perhaps the bigger storyline – even bigger than the result – was the presence of fans at IG Field for the first time since the Winnipeg Blue Bombers last home game in late October of 2019.

Valour’s supporter group – Red River Rising – began their usual schtick as soon as the gates opened and were relentless until the final whistle with their creativity, including one chant that is a sign of the times.

‘Stand up if you’re double-vaxxed, stand-up!’

“Awesome. Awesome for them,” said Gale on having fans back in the stands. “Like I’ve said many times before, it’s a reward for the Manitoba people.

“Our only disappointment is the end result and not getting a point I thought we might have deserved in the second half.”

Valour had opened the CPL’s Kickoff event with three straight 2-nil victories, backstopped by rookie keeper Jonathan Sirois. Gale opted to go with the veteran Silva, not only to give Sirois a breather, but because of the matchup against the club he began his CPL career with: York9 FC.

“Johnny’s done really well, but Matt’s been with us two years and didn’t get a game in the bubble last year, back in another bubble, I think it’s important for the mental health of the players and the team to get everybody involved,” said Gale. “We felt today against his old club York he’d have the motivation and it just gives Johnny a bit of a breather. It’s a pretty crazy start to your professional career with so many games in so many days.

“You have to realize the strains on these guys physically and mentally being in these situations, so we wanted to give Joe a little refresh and give Matt an opportunity.”

Next up for Valour FC: a Sunday afternoon matinee against Forge FC.