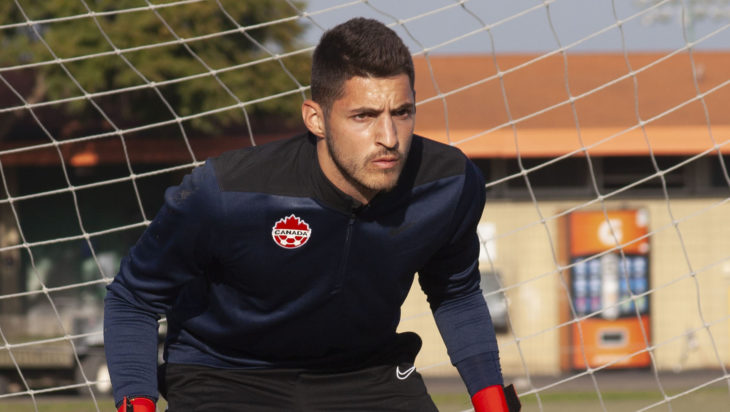 James Pantemis has the exact same dream of every professional goalkeeper on the planet: he wants to be the No.1 option for his club and he would absolutely love to be a focal point for his country’s national team.

Critical in chasing that is, quite clearly, getting the opportunity to be manning the net on a regular basis. And that’s where his new association with Valour FC – the Canadian Premier League club announced today he had been acquired on loan from the Montreal Impact – could be such a boon to both the player and his new squad.

“I’ve been training at a really high level for a long time and I feel like I’ve reached what’s needed to be reached in in the training sessions,” began Pantemis in a conversation with valourfootball.club. “Now I want to do that in the games.”

“It’s important not only for myself but anyone at this age to be playing, to be getting games week in and week out. That’s something I’m really excited to do. It’s been a few years since I’ve had a full season, but I’m very determined and focused. I think I have a lot to prove this season and I’m ready to prove it.”

Pantemis – and he is the first to admit it – is at an important stage in his career. The Kirkland, Quebec native just turned 23 and very much remains on the radar for the national team, recently dressing as the backup keeper for Canada’s 1-0 loss to Iceland in a friendly on January 16, 2020.

RELATED READING: CPL off-season roster tracker: Who’s in and who’s out for 2020?

He also got some work with Bologna FC’s first team in exhibition matches while on loan from the Impact during a stretch from early November to late December. Still, what he is seeking is real minutes in real games consistently. Worth noting: the Impact are on board with this loan, too, still seeing the upside in their young keeper.

“It was one of the main discussions we had last year,” Pantemiss explained. “We said at the beginning of last year I wanted to push for the No. 2 spot and challenge the starting keeper at the time. Then, eventually, we had a coaching change and things went a bit south and unfortunately I didn’t get the games I would have hoped to.

“We spoke at the end of the season with the club and they agreed it was essential for me to play games in order to hopefully becoming the No. 1 in Montreal. I need to get the opportunities this season to put myself in that situation.

“I was talking with my agent and we were trying to find a good solution, a good fit for me, to find a good amount of games. We were talking about some clubs and I was following Valour last year because I had a few friends (Michael Petrasso, Louis Béland-Goyette, Raph Garcia and Yohan LeBourhis) playing for the team. Generally I liked what they presented and I’ve worked with (Valour GM and head coach) Rob (Gale) in the past (with the U-18 and U-20 National teams) and respect him.”

Pantemis made his debut with the National team program in 2012 as a 15-year-old and could very well be the starting keeper for Canada’s U-23 squad in the CONCACAF Olympic qualifying in March.

“He needs to play and wants to play and he’s very highly thought of with the Impact,” said Gale. “It’s a very similar situation to Maxime Crépeau who was there before and went to Ottawa on loan and then became Vancouver Whitecaps goalie.

“He needed to get minutes somewhere, especially as a goalkeeper. It worked out well for Max and I think it laid the blueprint where James said, ‘I need to make the step up and be the No. 1 goalie.’”

And, again, here’s where this Pantemis-Valour FC loan agreement could be the perfect marriage. It’s one thing to be labelled as a prospect, after all, but a player can’t take that next critical step without regular minutes in matches that matter.

“It’s difficult,” Pantemis admitted of waiting for an opportunity. “You have your group of three or four keepers per team and it’s not the same as another player that could get subbed in and get 20 minutes or so here and there.

“You get one shot and sometimes it comes only once in six-seven months, like my case last season. I didn’t play until the summer. I went from the preseason and didn’t get my first minutes until the summer in the Canadian Championship. That can be difficult because the speed in training and the speed in the game is different. That’s why this is such a great opportunity for me.”