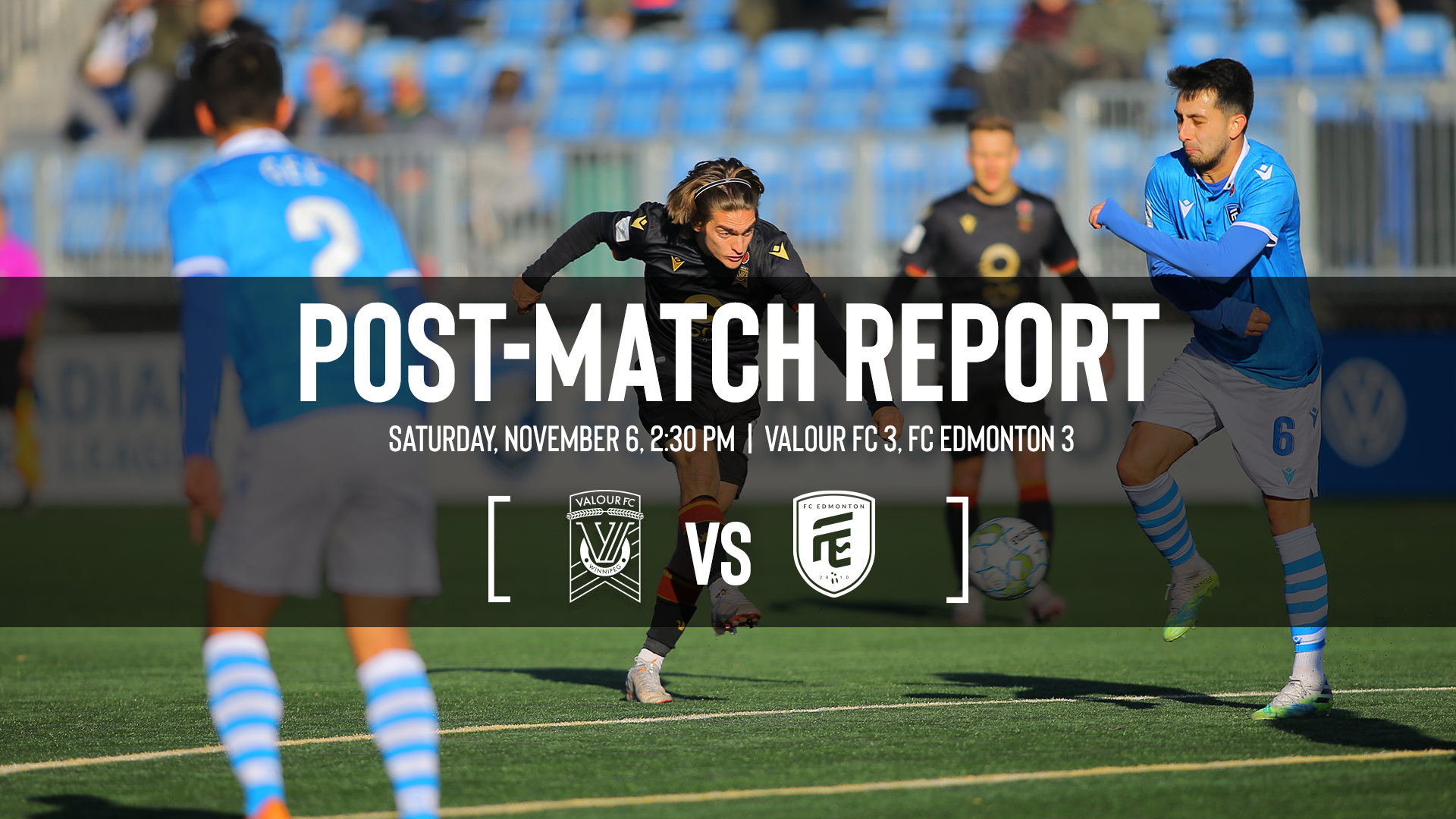 “They wanted to be in that playoff spot and they fought until the last minute.” | Valour FC 3, FC Edmonton 3
November 6, 2021

Valour FC’s Canadian Premier League playoff hopes were officially extinguished Saturday afternoon in Edmonton on a day that was representative of a topsy-turvy and, ultimately, disappointing campaign.

Getting a favour earlier in the day as Forge FC knocked off York United FC 3-2 to keep their postseason dreams alive, Valour instead unravelled, falling behind 3-nil before rallying remarkably in a 3-3 draw FC Edmonton at Clarke Field in the Alberta capital that nonetheless brings their ’21 season to an abrupt and full stop.

Valour finishes the year with 10 wins, five draws and 13 defeats, good for 35 points and currently in fifth spot in the CPL standings. A win by HFX Wanderers in their match Sunday against Atlético Ottawa would bump Valour into sixth place.

“The game started and it seemed like Edmonton was playing for a playoff spot,” said Valour FC GM and head coach Phillip Dos Santos. “They were pragmatic, they were efficient, they were stretching us with balls being played in behind or into their front line and just jumping in second balls and we weren’t defending well.

“… My disappointment comes when you see the opposition winning all those battles in those 1v1 situations. You can come with all the plans that you have as a coach, but if the opposition is able to get to the ball, to fight for a ball, win it, keep it more than you do they’re going to control the game.”
Valour should have been buoyed early by the Forge result over York in the match just prior to their own, but instead served up a sloppy and mistake-filled opening half that saw them fall behind in the fourth minute on a goal by Tobias Warschewski that deflected off Rocco Romeo and behind Jonathan Sirois. The deficit grew just 12 minutes later when Amer Didic capitalized on a Eddies corner to give the hosts a 2-nil lead. And any hopes of a second-half rally appeared to be snuffed out early, as Azriel Gonzales scored in the 48th minute for a 3-nil advantage.

That’s when things got loopy, as Valour jumped out of the grave with three goals in a 10-minute span – with Moses Dyer scoring in the 78th and 81st minute and Daryl Fordyce in the 88th to give the visitors life.

Alas, a last-minute chance by William Akio failed to find the back of the net and Valour escaped with a draw when they needed the full three points.

GOAL 🎖🎖🎖@ValourFootball WITH THE COMEBACK!?!

—
“It shows a lot about the group,” said Dos Santos of the rally. “It’s a game where I feel in any given situation or circumstance where you come on the road, you’re down 3-zero and within 10 minutes or 15 minutes you are able to get the draw you would be celebrating, but today we’re not.

“Today if you go into that locker room heads are down and everybody is disappointed. … The guys didn’t want to finish, they didn’t want things to end today. They wanted to be in that playoff spot and they fought until the last minute.”

Valour opened the 2021 season in the CPL’s Kickoff bubble at IG Field, winning six of its first eight games. But the club was also crippled by injuries to critical personnel, losing co-captain Andrew Jean-Baptiste for the season in July and then leading-scorer Austin Ricci in mid-September.

A midseason slump cost Rob Gale his job, and while Valour dropped its first two games under Dos Santos, it did finish with three wins, three draws and four losses under his watch and battled – as he had hoped – right to the final game. The final whistle in the final game.

“There’s a very strong foundation. The group is better right now, they want it more,” said Dos Santos. “I just told them we have to channel this and these feelings to what we want to be about next year. The foundation is there, the club is there, the set-up is there. The people are good people, they’re professionals and there’s a lot of good things for us to build from.