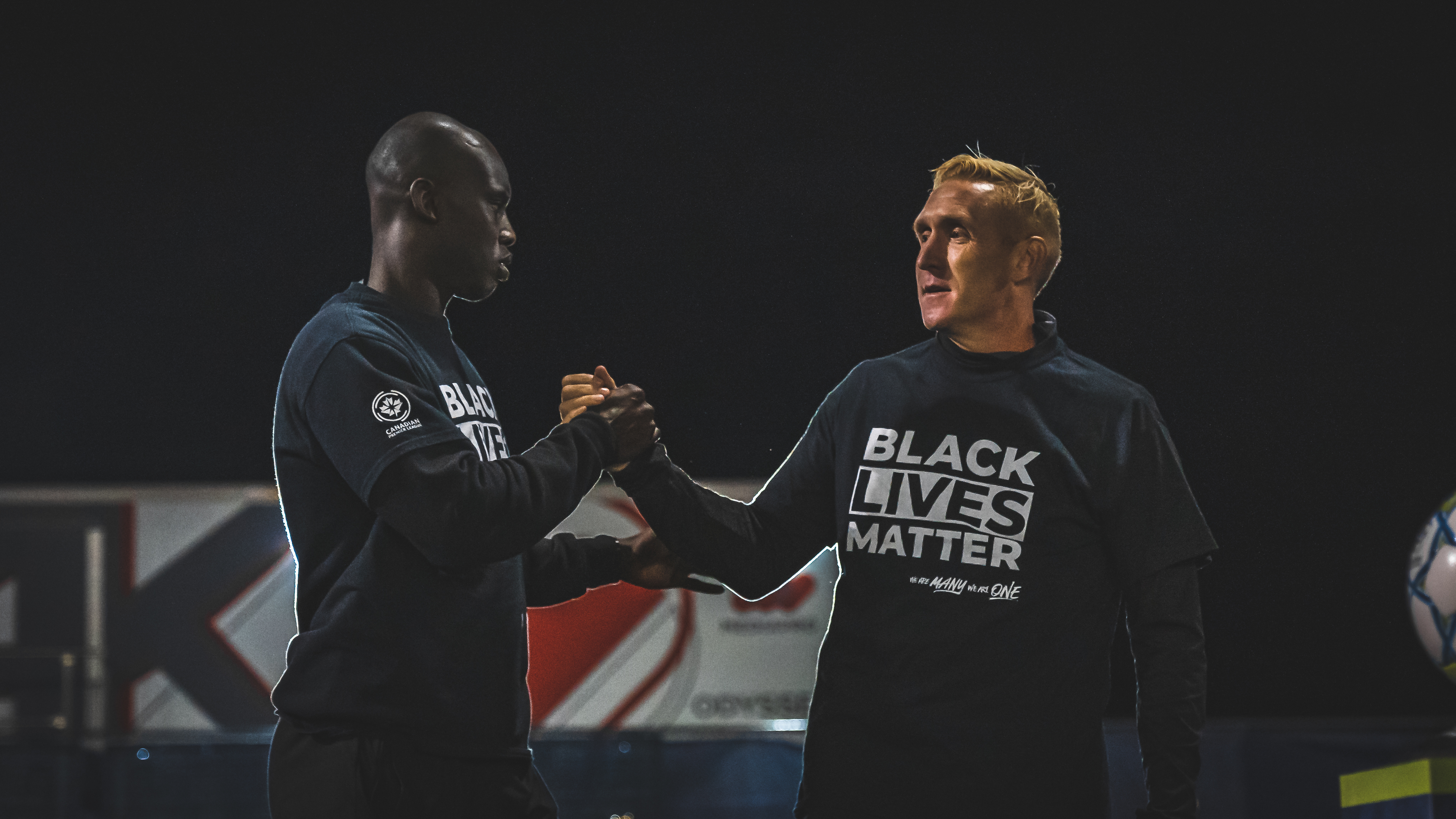 The Island Games were an important event for the Canadian Premier League and its eight franchises, including Valour FC.

It was critical this country’s domestic soccer circuit re-establish some momentum after a solid inaugural campaign in 2019 from a business perspective and, simply, in terms of maintaining a profile.

Still, as the event unfolded during the month-long event in Charlottetown, PEI the league and the players also shone brightly off the pitch in delivering powerful messages about social justice and the Black Lives Matter movement. 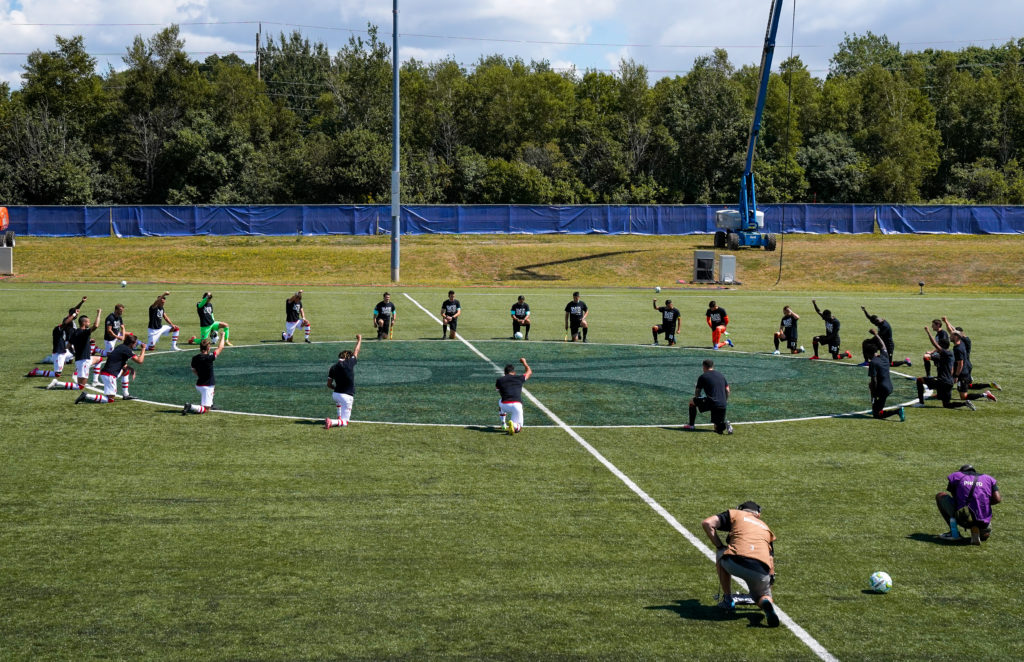 That story – players and the league doing their part to spread an anti-racism message – left an indelible imprint during the Island Games and comes in at #2 in our Valour Year in Review series.

The message was on display before every match, as players kneeled in support of BLM and throughout the OneSoccer telecasts.

“Judge me for my character and not because of the colour of my skin, religion or sexual orientation,” said Jean-Baptiste near the end of the message. “Help by any means bring justice to the family and friends that lost a brother, mother, sister or father to due to people’s hateful ideologies.

“Don’t turn a blind eye just because this doesn’t affect you. Stay with us to fight for these families. Do what’s right and be on the right side of history.”

That powerful message was augmented by an equally-telling moment during the games for Valour FC. Masta Kacher, an Algerian-born/Canadian-raisedattacker, scored the winning goal in a critical 2-1 victory over FC Edmonton and his celebration was arguably the most-compelling image of the Island Games for the squad.

In celebrating his goal, Kacher dropped to one knee and raised his right fist in support of the anti-racism movement. He was flanked by two Black players in Jean-Baptiste, an American of Haitian descent, and Canadian Julian Dunn. Seconds later they were joined by two Caucasian players — Daryl Fordyce, a product of Northern Ireland who now calls Canada home and Stefan Cebara, born in Croatia and raised in Canada. 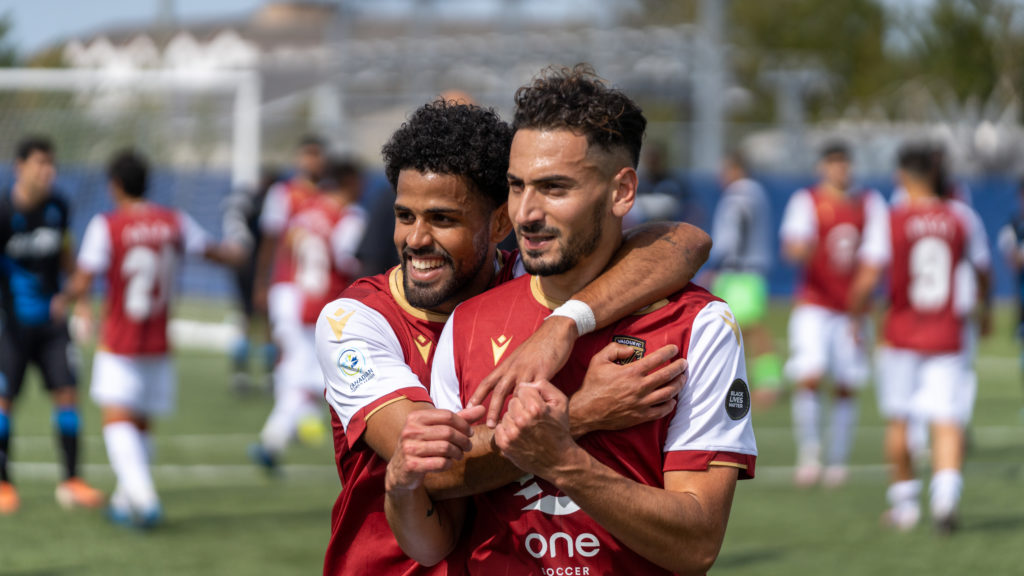 “Our team, we have players from all over the world and this is an issue we take very seriously,” said Kacher following the match. “We believe that by taking these small steps we can actually make a difference in our community. We’re trying to touch as many people as we can.

“And the celebration… I had it in the back of my mind. Even before the tournament it was something I was thinking of and had planned. You never know when you are going to score, but in that case I knew what I wanted to do because I wanted to send a message in support of the cause.

“The diversity we have on the team, me as an immigrant to Canada and for everything that is going on in the world… I wanted to take the time to celebrate with my teammates something truly more powerful than a normal celebration. Maybe it’s something that can open people’s eyes. That was the message we wanted to transmit to everyone as a team.”

During the tournament Valour FC GM and head coach Rob Gale also spoke with Michael Redhead Champagne, the Winnipeg community leader and member of the Shamattawa Cree Nation and wore a black arm band in remembrance of the murdered and missing indigenous women of Manitoba.
“I cannot speak for other teams, but we have worked to educate ourselves, to put ourselves in other people’s positions to understand,” Kacher said. “We have discussions on this as a team and Rob is actually trying to educate on this because he is very concerned as well. It’s something he has in his heart.”

“They’re an awesome group. They care,” added Gale. “They care about each other, they care about society and it’s transcending to the field. And it’s exactly what we want to represent as Valour Football Club.”

Next: A Foundation Takes Shape