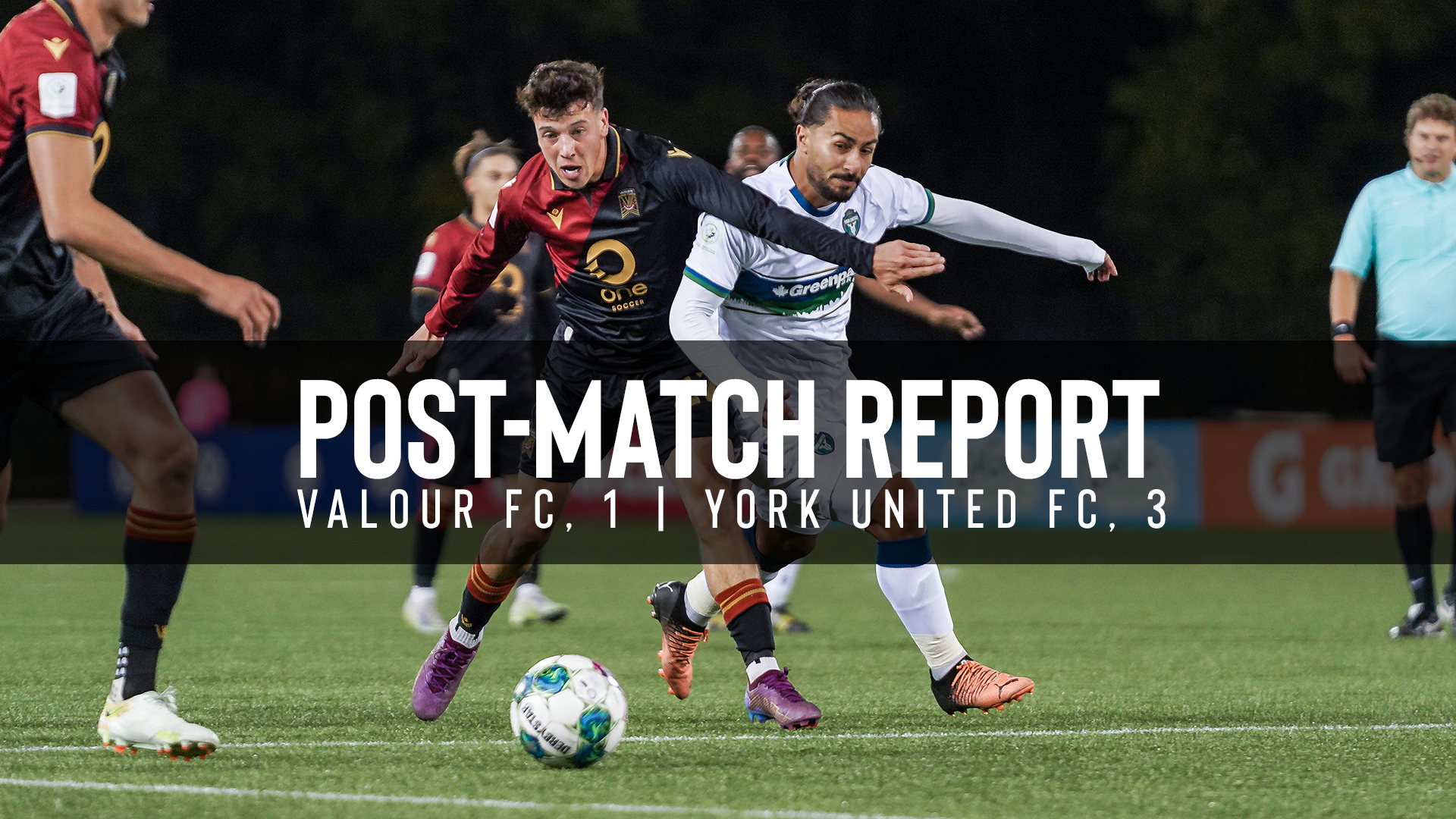 Valour FC continues to walk a precarious path in their ongoing pursuit of a Canadian Premier League playoff spot.

Winnipeg’s professional soccer side fell 3-1 to York United FC in Toronto Friday night and as a result their grasp of the fourth and final postseason position has become even more tenuous.

Valour will remain in fourth place with 37 points on 10 wins and seven draws and nine losses, tied with defending CPL-champion Pacific FC, who are 10-7-7 and have a chance to move into sole possession of the final playoff spot Sunday afternoon in Nova Scotia against HFX Wanderers.

Now winless in three overall, Valour is also winless in five on the road dating back to a 1-nil win over Forge FC back on June 29th. That’s significant because Valour’s final two regular-season matches are away from home – October 2 in Calgary against Cavalry FC and October 8th vs. FC Edmonton.

“It doesn’t come at a good time. The truth is we have to think about the next game very fast and it’s easy. It’s easy to know what went wrong and to address it.”

Valour’s Friday night opened solidly, and the club was full credit for an early 1-nil lead. Forward Walter Poncé was pulled down in the box by York United keeper Eleias Himaras in the 14th minute and that was followed by a clinical penalty-kick goal by Stefan Cebara.

GOAL 🎖@ValourFootball open the scoring vs. @yorkutdfc as Stefan Cebara puts it home from the spot! 1-0 Valour. #CanPL | 🔴 https://t.co/7JFAUhgjL6 pic.twitter.com/g0YbUkdCXE

York was dominant in what followed, as Mo Babouli evened the score in the 34th minute and then helped set up two markers in the second half by Chrisnovic N’Sa and Luis Lawrie-Lattanzio.

York was especially effective in breaking down Valour’s usually stellar defence and managed to fire 12 shots, with eight of them on target.

“Football is about criteria, choosing in the moment and as coaches we work during the week. But then the 90 minutes is the jungle, and the guys have to react to what’s coming at them,” said Dos Santos. “We need to do it with clarity and understand where we could be effective.

“There’s days that it goes our way and today was a game that we let go because once we have the lead, we can’t fall in that trap. We need to have the maturity and the ability to play in our game and be able to close the spaces and force the opposition to make mistakes and then get on the ball when we have the chance to do it and value it and keep it and attack with a team that is cohesive and is next to the ball so that the game doesn’t stretch like it did.”

Valour will return to Winnipeg on Sunday and then begin preparations for next Sunday’s trip to southern Alberta to face Cavalry FC. Critical now is for the squad to fix what went wrong against York and then stay within the blueprint that had brought them so much success of late to move into a playoff spot.

What will also be important is for this team not to get swallowed up by the moment.

“It’s simple – for me, in my view, we have to win two games,” said Dos Santos. “That’s what I see. That’s what I expect and that’s going to be the message. And if we don’t then that’s because another team deserves to be in the playoffs and not us.

“It comes down to maturity. It’s not a group of kids. We have a mature team out there. These are moments that are going to be normal in the career of a player, of a coach. It’s just like a playoff game or a final. You need to control your emotions; you need to stay on the task and if we can’t do that, we will always fall short.

“… There are games that are must-win in order for them to be in the playoffs and that’s our case right now. We can’t be overwhelmed. We need to be strong. We need to be focussed on the objective.”

-Dos Santos said forward Moses Dyer, who did not dress, is still nursing an injury and is still day to day. The hope is he will be available next weekend.

“We hope he will be OK, but we’ll have to see how he progresses. “He tried training, he felt pain and we had to keep him out. It’s an injury that is more annoying, it’s painful and there’s not an immediate fix. Rest is the best fix so we need to cope with that.”