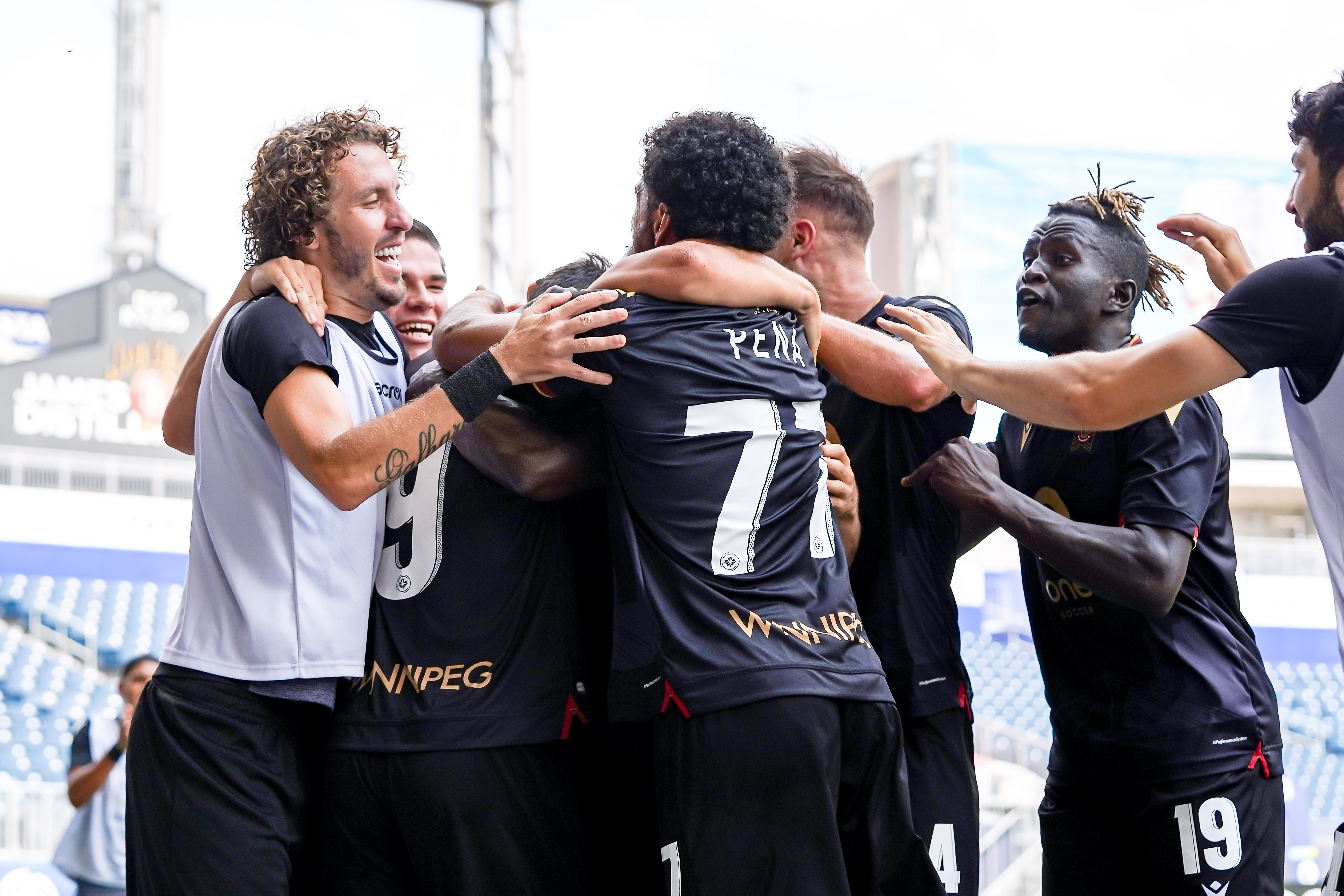 July 11, 2021. Valour FC vs Forge FC. Second-Half. Austin Ricci of Valour FC is mobbed by teammates after scoring a second-half goal.
“We know player for player, I’ll take us against anyone in the league and I think we’re showing that after five games so far.” | Valour FC 1, Forge FC 0
July 11, 2021

Go ahead and spit out all the sporting clichés you like – it’s a marathon, not a sprint; it’s not how you start, it’s how you finish and so on – until you’re blue in the face.

All of them apply to Valour FC’s marvellous start to the 2021 Canadian Premier League season, of course. But with a record of 4-0-1 after five matches, including a pair of wins over two-time defending CPL champs Forge FC, Winnipeg’s pro soccer side really does have something special brewing.

“Winning breeds confidence, no doubt about it,” said Valour FC GM and head coach Rob Gale. “And it becomes a habit and that’s what we wanted to try and get into. You don’t want to make losing a habit on the opposite end. It will breed confidence for the boys.

“The effort was there in extremely difficult conditions for both teams – it’s shocking to play football in that heat – but they found a way. I told them before the game they might have to suffer to find a win today, but they did and they put in a monumental effort to get the result.

“We’re still a bit disappointed… the referee apologized for the mistake the other night (in a 2-1 loss to York United FC) when (Raphael) Galhardo bent it in the top corner (but the goal was waved off). We were disappointed and we wanted to react in the right way. We knew it was a chance to go ahead in the table again and put some distance between us and Forge who had two really good games. Everyone was saying how good they are. So, we wanted to get after them.

“We knew it was going to be a tough one in the heat, but I thought we did enough and created enough opportunities to create some good chances, the best chances of the game. And then what a goal to win it, deserving of the winning goal.”

Forge FC had the early possession in the game, but a Valour FC counter-attack led to a good chance by William Akio in the 10th minute. Forge pushed back a few minutes later and only a brilliant Andrew Jean-Baptiste clearance off the goal line prevented Valour from falling behind.

Valour settled in after that and was rewarded in the 56th minute on a brilliant strike by Austin Ricci with his second goal of the season.

“It feels good. I thought it was a great finish,” Ricci said. “I didn’t think I had the best game, so doing something like that definitely makes you feel better about the whole performance.”

Interestingly, after having not beaten Forge FC in the first two years of the franchise’s history – Valour had but a draw and five losses in six meetings – they now have two victories against them in 15 days.

And that has to boost the collective confidence.

“It’s growing very well,” said Ricci. “We have a ton of quality on this team, player for player, individuals… in the training sessions you can see everything.

“We know player for player, I’ll take us against anyone in the league and I think we’re showing that after five games so far.”