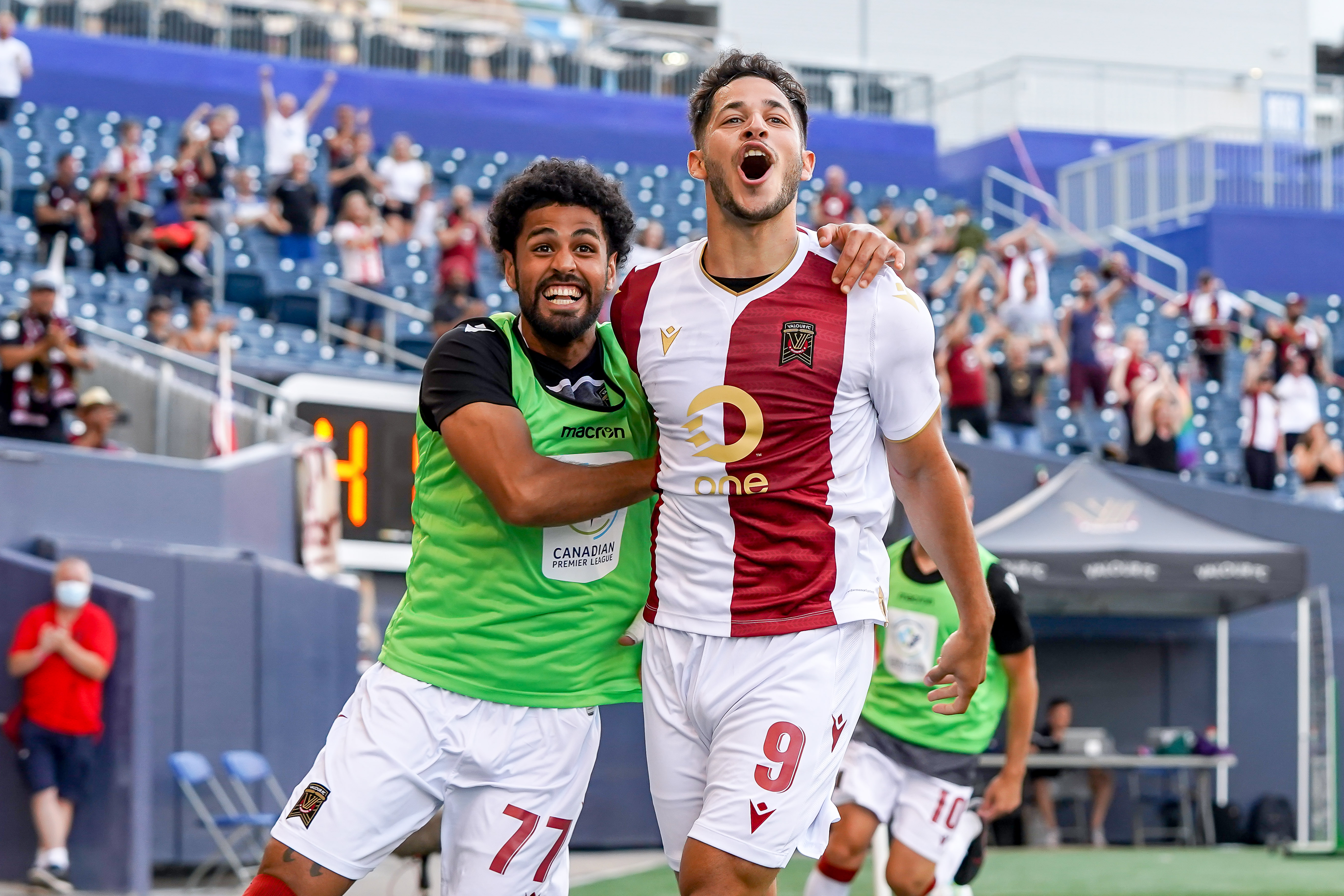 The Valour FC train keeps gaining steam and rolling through the Canadian Premier League’s ‘Kickoff’ event – through the blistering heat, the arduous schedule and now with possibly a devastating injury.

Valour FC remained atop the CPL’s standings with a dominant 3-nil win over York United FC Sunday night at IG Field, but the result might have come at a cost.

Co-captain Andrew Jean-Baptiste – arguably the league’s best player so far this season – was injured on a challenge in the 14th minute and needed to be carted off the pitch after an apparent knee injury. He returned later, albeit on crutches, and GM and head coach Rob Gale said no update on Jean-Baptiste’s injury would be available for a couple of days.

“They’re professional footballers. Nobody wants to see injuries on either team or anybody go down, but it’s next man up,” said Gale. “That’s why you have a squad.”

A theme that came up before and after the match centered around the term ‘resilience’ and that was on full display against York. With Jean-Baptiste down, Stefan Cebara slapped on the captain’s arm band, shifted into his teammate’s centre back and then headed home a Sean Rea corner in the 18thminute for the opening score.

“We’ve got a room full of leaders. It doesn’t matter who takes the arm band,” said Valour co-captain Daryl Fordyce. “We all stand up. We look after each other. That’s what we do.

“We actually spoke before the game that we needed resiliency and we needed toughness and togetherness. Drew’s one of our main leaders. He’s one of the best players in the league, if not the best, so far this year.

“But that’s what we have a squad for and the gaffer’s built an amazing squad. Anyone can step in and do the job and you saw that today. We’re really hoping Drew’s fine – he’ll get assessed after the game – but Rodrigo (Reyes) stepped in, Stef Cebara went back to centre back, Andy Baquero came in and it was no problem.”

The result improves Valour’s record to six wins against just one loss through the first seven matches of 2021, building further on the most-compelling storyline of the young season: the club’s transformation into a legitimate contender.

Not to be lost in Valour’s brilliant start and the injury to Jean-Baptiste is the work of goalkeeper Jonathan Sirois, who has now also backstopped his squad to six consecutive clean sheets – a CPL record. That mark was punctuated by a superb save on a penalty-kick attempt by Osvaldo Ramirez in the 34thminute.

WHAT A SAVE 🤯@ValourFootball GK Jonathan Sirois?

There’s more, as forward Austin Ricci potted two goals in the 42nd and 73rd minutes to give him four on the season and move him into the league lead in that department, ahead of four players with three including teammate Moses Dyer.

Ricci’s first came on deft pass from Rea, his second assist of the match.

And his second came on a brilliant run by Dyer, who set up his teammate for another dandy finish.

“It’s amazing to see Austin shine because he didn’t get a goal last year,” said Fordyce. “I’ve been helping Austin this season in his movement. He has all the attributes to be a top, top striker and he is a top, top striker – you’ve seen that. He’s got pace, he’s got strength, he’s got a finish and he’s still working on position.

“It was fantastic to see Austin score a couple of goals today, especially against his old club. It’s something for him to build on.”