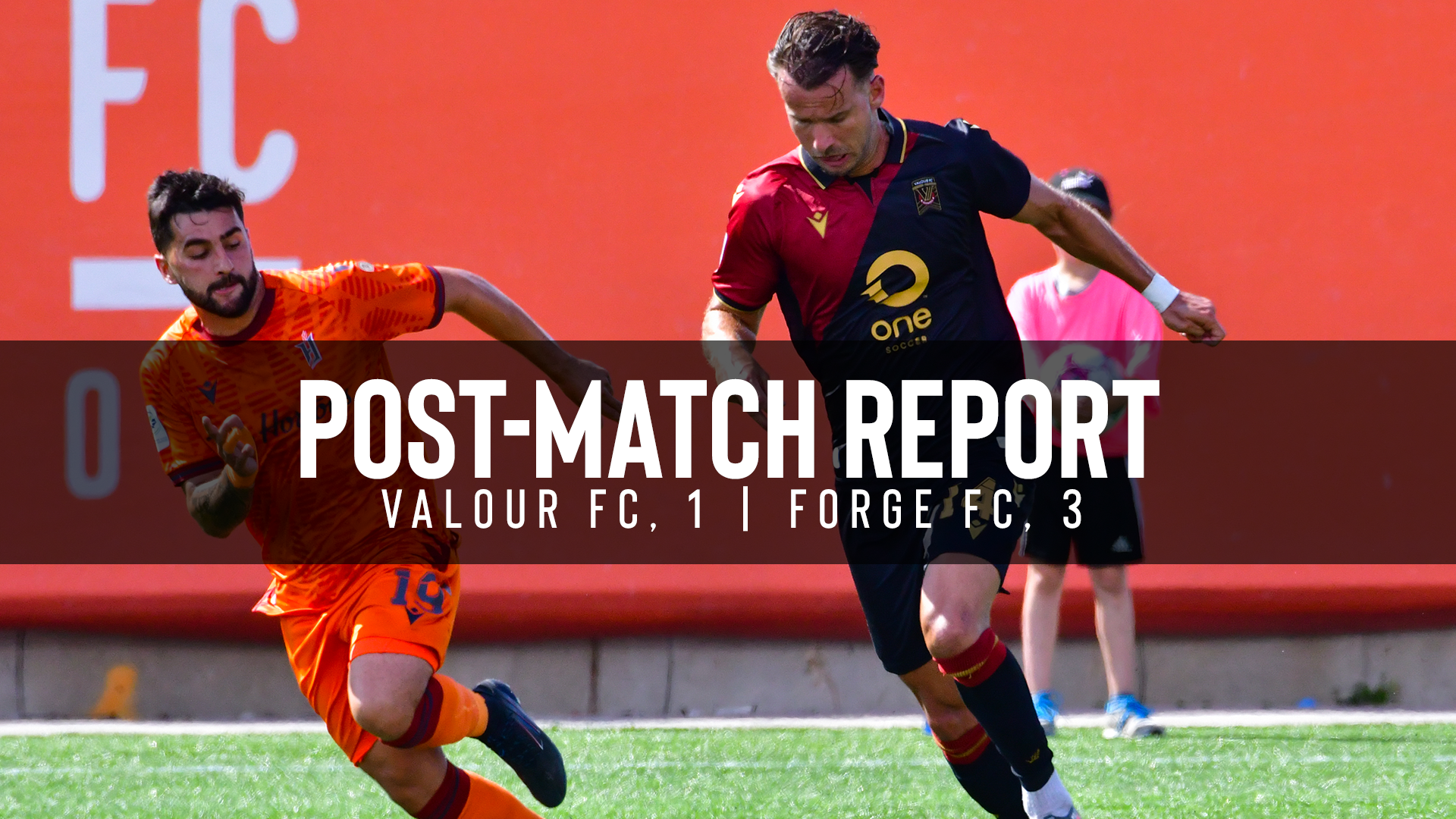 The result ends a run that saw the club post three wins and a draw, including the 1-1 tie with Atlético Ottawa on Wednesday night in a match that had been rescheduled due to league COVID-19 protocols in which the team needed three separate flights to get to the capital, with some players not arriving until 4:30 a.m. on match day.

And as much as they won’t float that excuse, all those factors ultimately caught up to Valour on Saturday in match in which they opened the scoring but fell victim to some of their own mistakes against a Forge side that can be clinical in making an opponent suffer for their errors.

The loss drops Valour’s record to 5-5-5, while Forge FC improves to 8-2-4 to vault into third place in the CPL standings. Valour remains in fifth, now six points out of a playoff spot behind both Forge and Atlético Ottawa, which is 7-5-3.

“A difficult week, things came at us in a way we had to deal with it and it’s disappointing we weren’t able to finish off,” said GM and head coach Phillip Dos Santos. “When there is fatigue and accumulated fatigue it can blur certain decisions.

“I just feel that overall you come here and you play a game where, yes, Hamilton had the ball in a lot of spells, but I don’t think they were creating very clear chances. It’s disappointing you give away the second goal that you did in a game where we knew we didn’t want to over-play in our half, and I think we did a little bit too much at times.

“Once you get that second goal (against) it becomes hard because you’re chasing against a very good team that has quality pieces to hurt you if you’re not careful in the way you deal with the ball.

“… The guys had a phenomenal approach to this whole trip and to this game, but it’s a game we could have come here and got a result, but we gave it away. And that’s what’s frustrating.”

Valour opened the scoring against the flow of play in the 23rdminute as Moses Dyer took a perfect pass from Daryl Fordyce to head home his team-leading seventh goal of the season.

Forge got the equalizer in the 40th minute on a superb effort by Woobens Pacius, and then Valour was guilty of some dreadful passing at the top of their own box which led to the match winner by Terran Campbell in the 67th minute. Forge FC would get a third in extra time, as Campbell capitalized with Valour pressing for the equalizer.

After completing a stretch that saw them play four of five on the road – all four games in Ontario – the club returns home to what could be a critical chunk of their season with seven of their next eight at IG Field, beginning with next Saturday’s visit by Pacific FC.

“At the end of the day we still have to look at it like it’s 10 points out of (a possible) 15, with the one home game, so we need to look at it in a positive way,” said Dos Santos of the recent run. “And we know we have a few games coming at home but, again, none of it matters if we don’t capitalize on those games.”

“We recover. We get back on the training pitch and we put right what we can put right,” he said. “That’s the only way about it – just keep working hard and keep going right until the end of the season.”

-Valour was without left back Brett Levis and midfielder Diego Gutierrez, both of whom were unavailable after emptying their tank in the Ottawa match.

-New centre back Nassim Mekideche made his Valour and CPL debut in the second half, coming on in the 82nd minute.

“Nassim’s a good player,” said Dos Santos. “When you look at a player with his athletic ability and how imposing he can be physically, you question how he’s going to be on the ball and his composure… I think he has both. Nassim is someone that in this league could dominate.

“He’s a player we’re going to count on and he’s going to help the team.”

-New forward Billy Forbes, the Turks and Caicos international on loan From Detroit City FC of the USL https://valourfc.canpl.ca/article/valour-fc-acquire-forward-billy-forbes-on-loan, was to arrive in Winnipeg on Sunday and will begin training immediately.

“Billy is a 31-year-old player that is fit, that has been training, that played for his national team not long ago, was training with Detroit,” said Dos Santos. “He comes in to help us right away. We don’t waste time. He’ll be with us Monday and he’s an option for me.”