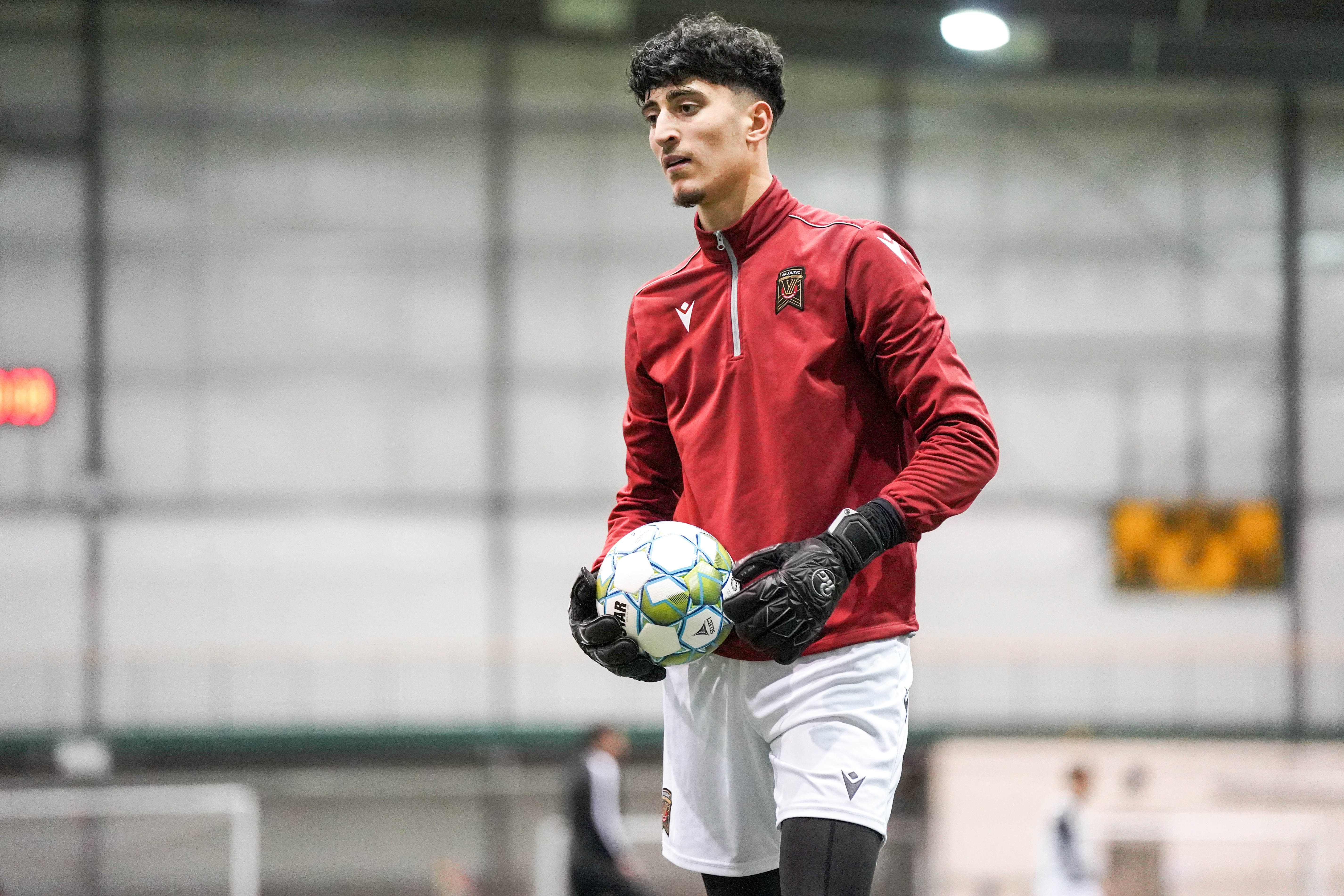 “He’s also got two unbelievable feet and his distribution is long and very powerful. And he works. He’s a machine.”
February 18, 2022

Watch Rayane Yesli for any length of time at Valour FC’s training camp and what leaps out instantly is the work rate of the Canadian Premier League’s goalkeeping prospect.

There’s that and – oh, yeah — there’s the fact his 6-7 frame which has him absolutely towering over his teammates.

Interesting, then, that as impressive as Yesli’s work has been this week, it is being somewhat overshadowed by a player not even in Winnipeg, as Valour is still in discussions with CF Montreal about another loan agreement this season for the CPL’s top goalkeeper in 2021.

Yesli is aware of that more than anyone, clearly, but is also adhering to the ‘control what you can control’ mantra through the first week of Valour camp and the Sirois situation unresolved.

“Joe is not here yet and we don’t know what’s going to happen with him,” said Yesli following the conclusion of training on Friday at the Winnipeg Soccer Federation South complex. “That doesn’t change my work or my mindset. I’ve just got to look at myself and progress. That’s the most-important thing from a personal aspect.”

Let’s make this clear even as the Sirois conversations are unfolding: if Valour’s No. 1 keeper returns for ’22 the club’s goalkeeping will be deeper and more talented than in any of the previous three seasons.

And if he doesn’t return, Valour management is more than willing to hand over the work to Yesli, the 22-year-old Montreal product.

“He’s someone who is always going to put himself in a position to play and fight for playing time and playing opportunities. That’s what we want. We don’t anyone to be too comfortable.”

Yesli was Valour’s first pick, third overall, in the CPL’s 2021 U-Sports Draft and spent the early part of last year with the club. But with Sirois and veteran Matt Silva locked in at the goalkeeping position, the former Université de Montreal product trained with CFL Montreal before playing with AS Blainville of the PLSQ and starting for the club in a 2-1 loss to HFX Wanderers in a Canadian Championship match.

“That was a really important game for me because I had to prove I could play at this level,” Yesli said. “I got other minutes in the PLSQ, which really helped me because training three-four months with Valour without getting any games was not only hard mentally, but you also lose that competitive aspect. You really need it and I found that again with Blaineville. That was a perfect move for me.” 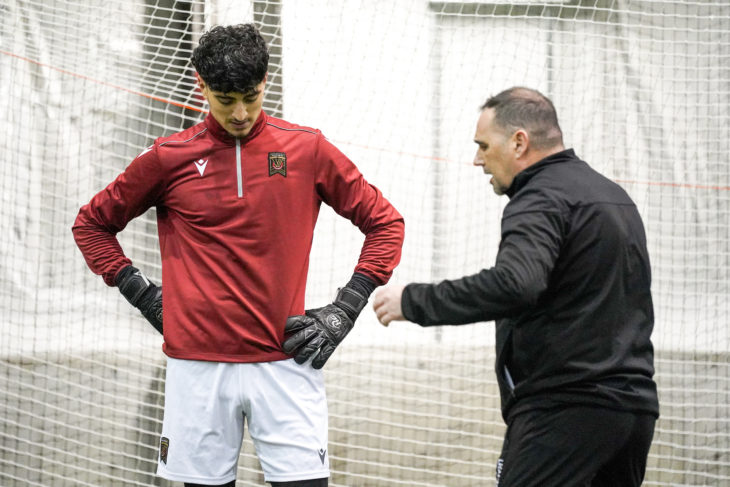 “He had a good game against Halifax and showed a good presence,” added Valour goalkeeper coach Patrick Di Stefani. “He needs to grab the minutes. Training is one thing, but he needs to acquire the rhythm of a game. That’s part of the process.

“What I’ve liked is his ability to go down to the ground for a tall guy is quite impressive. He’s down very quickly. We’re working on going up quick, too, but he’s also got two unbelievable feet and his distribution is long and very powerful. And he works. He’s a machine.”

Upon arrival for Valour’s camp just over a week ago the coaching staff expressed the confidence they have in him. He’s also being pushed in camp by former Forge FC keeper Quillan Roberts, who spent last year with 1812 FC Barrie of League1 Ontario, and Evan Barker, a Winnipeg product who starred at the University of New Brunswick and has played for FC Manitoba.

“It’s really good to know you have the staff’s trust. Also, my teammates know how I play, and we built a relationship last year and there are some guys I have played with before,” said Yesli. “All of that really helps a player to grow in confidence and be more stable in his game.

What’s also obvious is how comfortable Yesli is in his second go with Valour FC. A year ago he was a U-Sports prospect just trying to make an impression. This winter that increased comfort level is part of the foundation for the growth in his confidence.

“It’s a perfect scenario, honestly,” said Yesli “Every time you get to a new club you have a little period that you need to adapt yourself. This year I really feel like I’m home here. 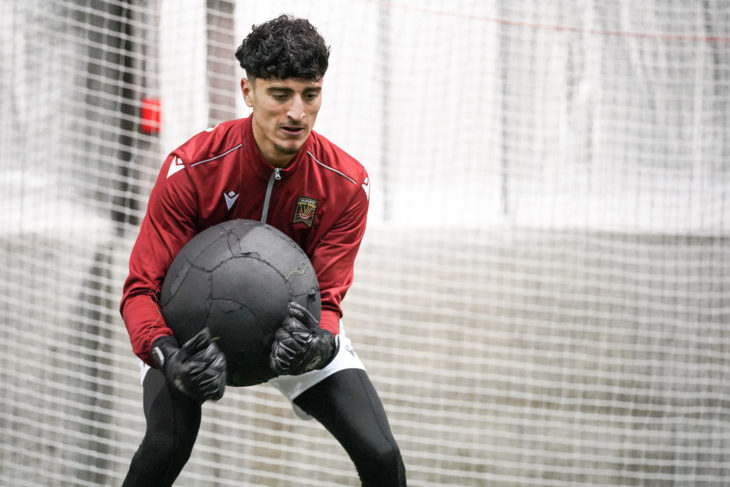 “Last year was a bit harder – the first few weeks I had to adapt to the style of my goalkeeper coach, to the players to my environment. But now I know everything and how this club works, and I know all the guys. Now it’s really, really easy for me this year.”

‘V’ NOTES: Valour wrapped up its fifth full day of on-field camp on Friday. Asked what he’s like through the early stages, Dos Santos offered this:

“The intensity, the way they’re trying to grasp the information and apply it and execute; they’re commitment to everything. We spoke about the work that is not as pleasant and how they’ve embraced it and they just go with their work, and they understand it’s important to create a foundation.

“There’s been a lot of good things on and off the field. There’s been a lot of things we’re starting to build, and it’s been positive. The guys, they look good. They know it’s a moment in their preparation and they will need to put in the work in order to get a good base and foundation to progress.”

Dos Santos said he’s liked what he’s seen off the field, too, in terms of how the ‘group connects with each other’ – all the while knowing more players, including internationals Walter Ponce and Daniel Ascanio, will soon be arriving.

“I told the guys, ‘Nobody can be comfortable,’” said Dos Santos. “There’s a few players that are not here that have been signed and we’re still looking at every opportunity we have to better the team. They know that. They know that this is an environment you need to enjoy, but you can’t get too comfortable.”