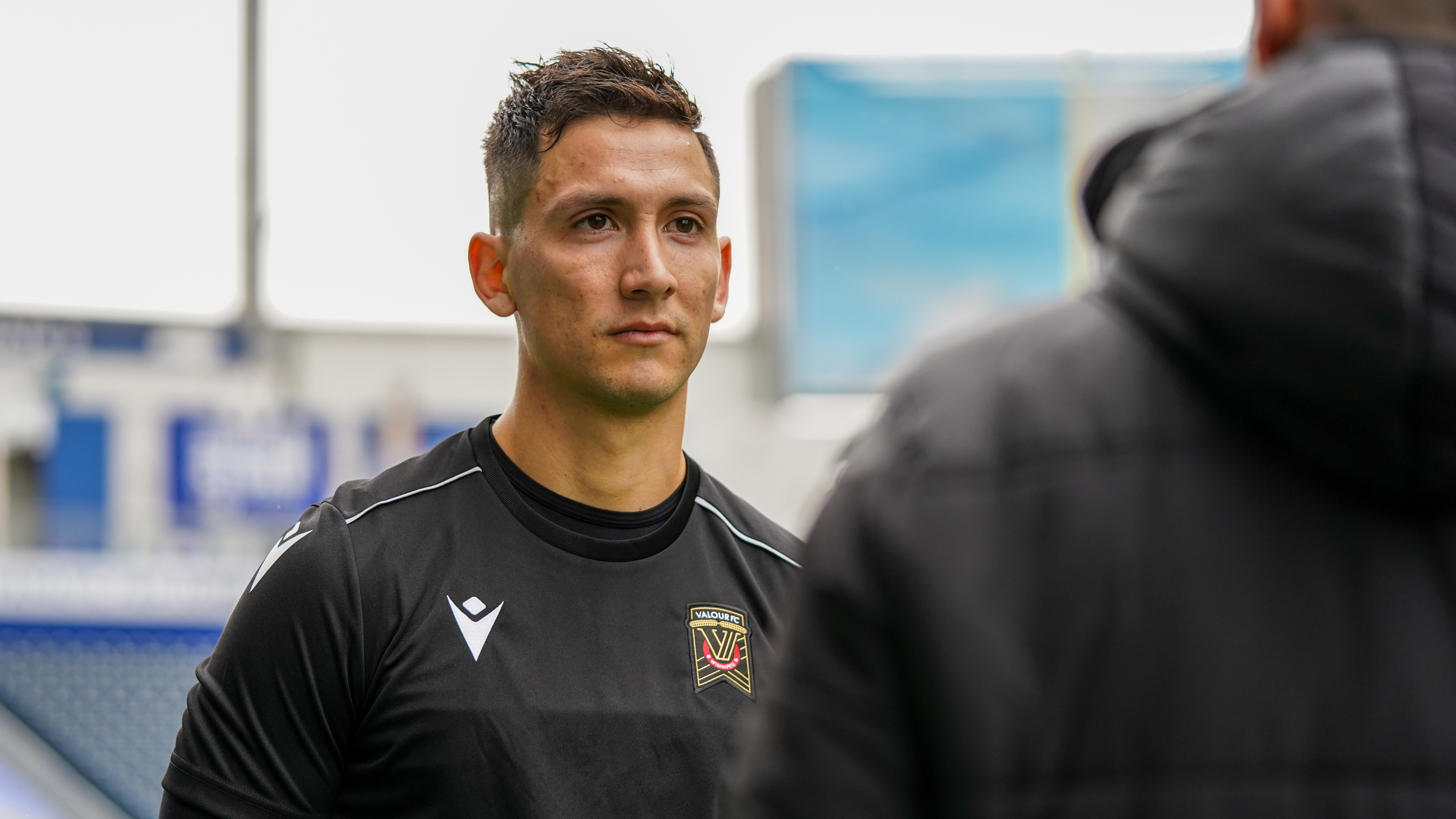 After months of waiting – and all the frustration that went along with it – no one would have held it against Valour FC if the moment Walter Ponce first stepped onto the field this week was met with the fanfare of a brass band.

The Chilean forward, officially signed by the club on January 13th, finally joined the club for Tuesday’s training session. It’s uncertain if he’ll travel with the team to Calgary for this Saturday’s match against Cavalry FC, but he will soon be available for GM and head coach Phillip Dos Santos.

“He has goals in him,” Dos Santos said today in a chat with valourfootball.club. “We saw that during his spell with Universidad de Concepción. In and around the box he’s good. He has a good build, he has a good frame, he comes in fit… these are all good signs for us.

“He’s here… finally. One (international player) down, two to go.”

Colombian midfielder Daniel Ascanio is one of the other internationals, with the third yet to be announced by the club. Dos Santos said the third player is also Colombian and ‘extremely talented’ and is a 29-year-old who started every game for his Colombian first division team last season.

The Valour boss also indicated that both players have had their visas stamped, and once they are returned from the processing office could be en route to Winnipeg soon after.

Dos Santos said Ponce offers a great deal of mobility and could play centrally or along the wings. He spent last year with Chilean club Barnechea and was a teammate there with Valour midfielder Diego Gutiérrez, with those two now roommates here in Winnipeg.

Dos Santos, who speaks four languages, spent 15 minutes speaking to Ponce at the end of training on Tuesday in Spanish.

“It’s such an important quality in a coach when you are able to communicate with all your players in their language,” said Dos Santos. “One, it not only allows you to pass along your message in an accurate way it also puts the player in a comfortable position. It helps them very quickly integrate.”

A leftover clip from Sunday’s post-game, where Rea spoke of his jump in confidence compared to last year when he was first loaned to Valour from CF Montreal:

“Last year it took me a few games to adapt to the team, to the league,” he said. “When I got called back (this year) and had the first game against Edmonton it was like all-in for the season. The transition was super-easy, and I thought I was going to have a much better season the second time around. The first season I was a bit slow and wasn’t able to express myself as much as I wanted to.

“I feel like this season is really going to be my season.”

Rea’s goal against York – coming on his birthday – was a beauty.

🗣 "My body honestly just took over,"

The goal was Rea’s first of this season, and he is among the CPL leaders with three assists.

“His confidence, yes, but he’s a more mature player,” said Dos Santos of Rea. “He’s a player that trains (and is) very ambitious. He trains better.

“He’s extremely committed to the project here in Winnipeg. Last year when he was in Montreal and they decided to loan him, he saw that as something that wasn’t necessarily the best because his expectations were high. But this year he came in knowing that it was one more step for his development and his progression and he’s a player that trains very well.

“His mentality, his mindset has been very good and that makes a difference in the development as a young player. He sees this as an opportunity to play and to grow and to get minutes and he’s done that.”