“Hopefully we can take whatever momentum we build into the start of the season.” | Valour set to open 2021 training camp
April 29, 2021

It’s a ray of sunshine after many, many dark and cloudy days.

Valour FC has announced its training camp will open May 17th at IG Field in preparation for a third Canadian Premier League season, of which a start date is still to be officially determined.

“It gives us something to focus on and the first step back to whatever normal is now,” said Valour GM and head coach Rob Gale. “If all goes well with travel and everything we should have 15-16 players through quarantine and ready to train by then.”

Gale said there are seven players currently in Winnipeg, with another handful flying in soon. The team will have to follow health protocols upon its return to IG Field, including practising social distancing and using two change rooms.

But, again, it’s at least some positive news after a long stretch for a club that hasn’t been together since the end of the CPL’s Island Games in Prince Edward Island last September.

“Longest offseason ever,” said veteran defender Andrew Jean-Baptiste, who arrived in Winnipeg on April 11th. “This is a good feeling to know we’re getting back on the pitch with the guys and the new guys are going to be eager to develop relationships. 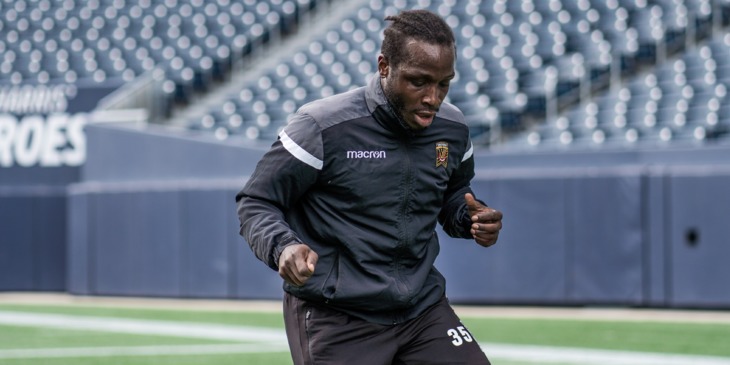 “Hopefully we can take whatever momentum we build into the start of the season.”

Valour coaches and players have stayed in touch through group chats, texts and Zoom calls over the months since last fall. But getting back on the pitch as a collective unit, even with restrictions, already has many gleefully rubbing their hands together.

“It’s what we love to do,” said Gale “The Zoom calls can’t replace the interaction and personal rapport with players and the teaching of the game, which myself, (assistant coaches) Damian (Rocke) and Patrick (Di Stefani) so like to do. Nothing beats being on the field and working with the guys. Hopefully we can continue to build our numbers and try to get to a full squad and training as quickly as we can.

“It will be like the first day of school when we finally get everybody out there. What’s it been eight months (since the Island Games)? That’s crazy.”

‘V’ NOTES: Valour also announced the termination of veteran midfielder Néstor Monge, due to ‘delays in the visa process.’

“That’s a big blow. There was just no visibility, unfortunately, on the timeframe for his visa,” said Gale. “It’s similar to what happened with Amir (Soto) last year, which took us 13 months to get done, in the end. It’s so difficult to get these guys in at the moment, as we’ve got one of the strictest borders in the world. A lot of countries don’t have their visa departments up and running as they would normally.”

Valour had hailed the signing of the 31-year-old Costa Rican international as one of its key offseason signings. Gale said the club is already on the hunt for a replacement.

“We’re bitterly disappointed because Nestor was going to be a very, very big piece for us in the way we want to play and in the quality of soccer he was to bring to the team,” Gale said.

“We had some knowledge that this was going to happen, so we’re working diligently on filling our roster needs. Anytime you lose someone down the middle of your team, your spine, that’s a challenge. Nestor is a top-quality player, so we don’t want to rush to fill it with just any player.”

Thanks @ValourFootball and Boss @galey77 for your confidence…