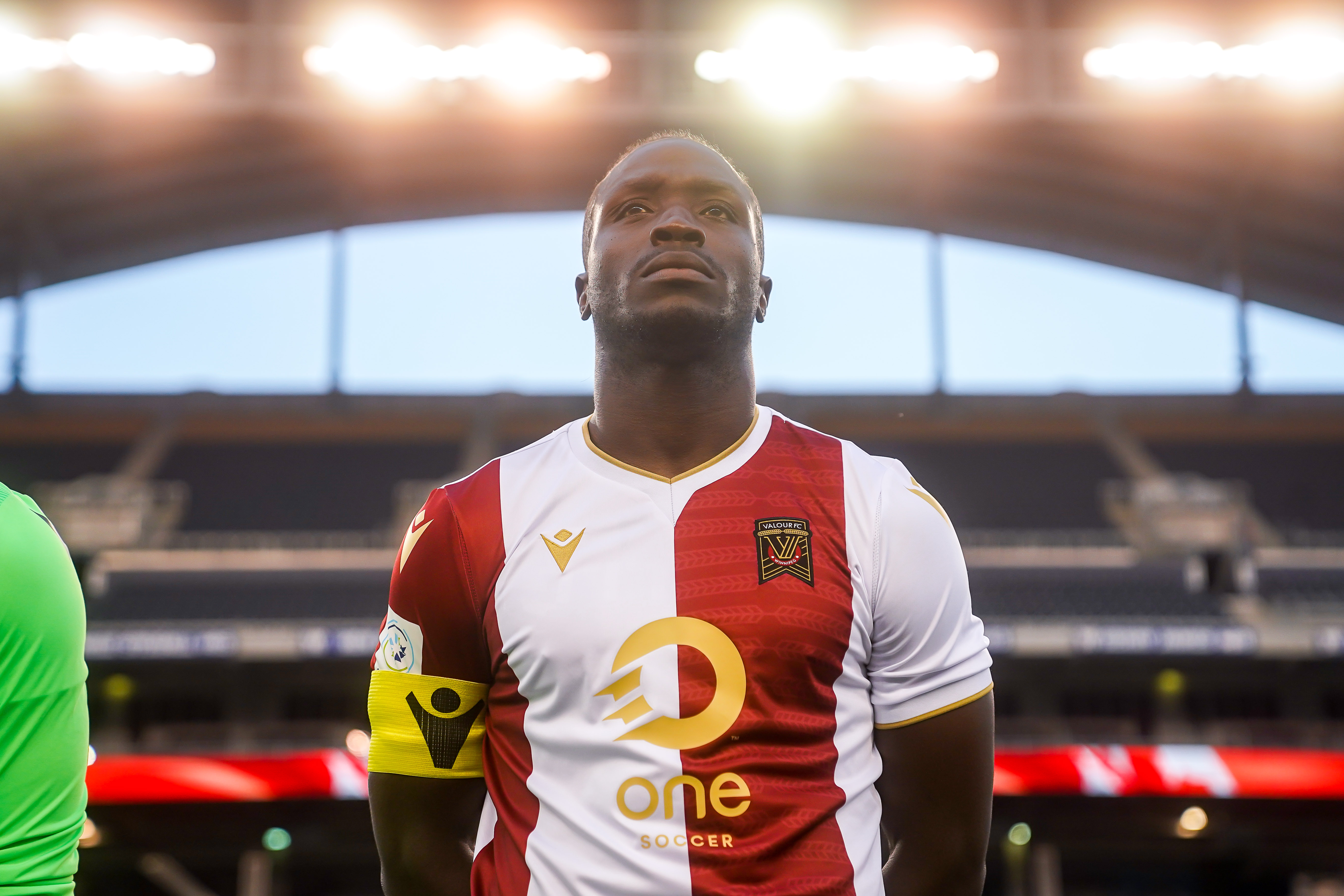 Valour FC’s focus in the here and now is fixated solely on their valiant chase for a Canadian Premier League playoff spot.

‘The Beast’ is back.

The club announced today that dominant centre back and co-captain Andrew Jean-Baptiste – out since the early stages of the season after suffering a knee injury – has signed a new contract to return.

The news is massive for the club for any number of reasons, not the least of which is his leadership and his play, but how he is also helping form the identity of a still-growing franchise that wants to evolve into a CPL power.

“Ultimately, that’s been my personal goal since I got here,” said Jean-Baptiste in an interview with valourfootball.club. “I’ve taken pride in my defensive record and that was the path we were on, regardless of whether we won a championship: we wanted to be known as a fortress and one of the better defensive, if not the best defensive team in the league. That’s unfinished business for me.

“That’s what ultimately we want this team to be: a force to be reckoned with, a team that is defensively sound and a team that will fight for 90 minutes and longer.”

Jean-Baptiste, now 29, began the 2021 season with some dominant performances. He re-established himself as not only arguably the best centre-back in the CPL, but as a legitimate MVP candidate while solidifying what was then the best defensive team in the league. On top of that, he had also scored twice in his seven matches.

And then came a devastating season-ending knee injury in which he injured his ACL and tore the meniscus in his knee.

“I’m still trying to regain muscle strength and growth, just to build back what I’ve lost over this time,” said Jean-Baptiste. “I’m just taking it slowly, riding a bike and getting some range of motion. There’s a long road to go, but the most-important key is to stay patient and trust the process Then when there’s areas to double down on the work that’s what I’ll do.

“You have those moments where you get down at the beginning of it. I’m past that now. It helped me movedpast it when I was doing more than just sitting at home. When I was home I had those thoughts, but when I was starting the rehab process it helped because I was back on board knowing what I had to do.”

Jean-Baptiste opted to remain in Winnipeg during his recovery and his voice remains an important one in the Valour locker room. That speaks volumes to his role with the club.

“I wanted to ride out everything with my team,” he said. “This is who I’m committed to and there’s a whole season we still have to go through. It wasn’t just me supporting them, it was them supporting me also. I could have got the same therapy and home, but this is my team and I didn’t want to abandon them in any scenario.

“I wanted to keep my voice in the locker room because there’s still a mission at hand. Coming back to Valour was a simple decision: I haven’t completed the personal mission I have for myself and for the team before I could ever feel comfortable with this team. I have a passion for this club.”

Jean-Baptiste has seen a change with Valour since the arrival of new GM and head coach Phillip Dos Santos, but also praised previous boss Rob Gale for the roster he helped piece together.

“When I was playing with Rob we got our results and we had a great partnership. His leaving left the team in some hardship, but Dos Santos has come along and steered the ship in the right direction.

“I have nothing but praise for Rob. He brought in this bunch of amazing players that we have in our locker room. We’re all grateful for that. You saw the capabilities of this team when we were all healthy. It hurt to see a great person and good coach. We’re fortunate in that we’ve seen another great person and great coach come in and the team has responded positively.”

Jean-Baptiste plans to remain in Winnipeg, all as part of recommitting to the team and being one of the faces of the franchise. And that’s no small thing for a man born in Haiti and raised in New York.

“I’m a Winnipegger now,” he said with a laugh. “And if I enjoy my first winter here I think it’s only right that I be crowned a Winnipegger.

“There’s a lot of attachment I have to this club already and the people who have supported me along the way and the people here in the office. I wanted to commit to them. We want to achieve big things here.”