HFX Wanderers FC
Halifax
MENU
“It’s do or die and now or never for us and we have to continue to make the most of it and capitalize on it.”
September 9, 2022

There’s a loud and palpable buzz about Valour FC these days, and as the results have piled up so, too, has the recognition and awards.

Winnipeg’s Canadian Premier League squad has gone on a 5-1-1 run since the end of July earning Sean Rea as the loop’s player of the month and GM and head coach Phillip Dos Santos the nod as manager of the month for August.

Sean Rea has been named @CPLsoccer's Player of the Month.

Most importantly, the current three-match winning streak has vaulted the club into a tie for third place in points with 36, and just four back of top spot with the top four squads qualifying for the playoffs.

Valour has five regular-season matches remaining – four of them on the road – beginning with Saturday’s visit to Nova Scotia and a meeting with HFX Wanderers.

Here’s the thing about all the awards and accolades of late: as far as the Valour lads are concerned, that will mean absolutely zilch unless the club takes care of business and is in a playoff spot in mid-October.

“There’s no room for error,” said veteran defender Stefan Cebara after training this week, prior to the club’s departure for Halifax. “If we think we’ve achieved something right now it’s definitely the wrong mentality. We need to take every game like it’s our last one.

“We’ve beaten every single team in this league and so just making the playoffs now is a pessimistic mentality. If we’re going to be in the playoffs, we have to think we’re going for the championship. I don’t want to say any of that yet because there’s lots of work still to be done.

“But we have a locker room full of winners and we all know what the end prize is.” 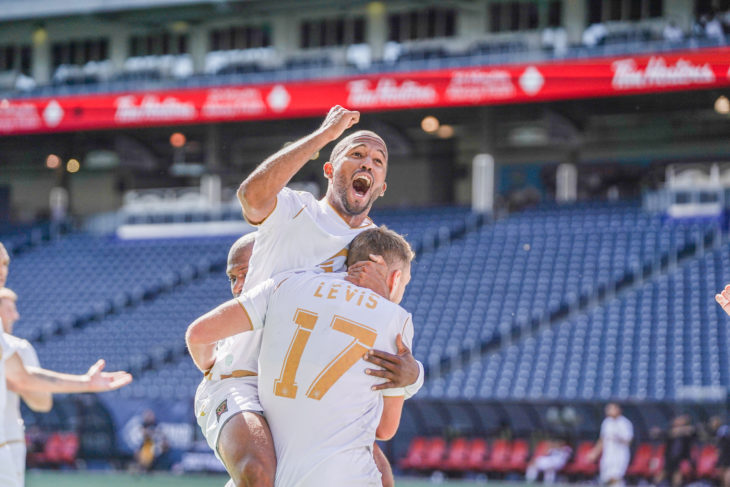 Valour has been the picture of a sound defensive squad over the 5-1-1 streak, posting five clean sheets and surrendering just two goals. They’ve also got timely goals over that stretch from Rea and Moses Dyer with two each, as well as from players like Rocco Romeo, Matthew de Brienne, Brett Levis and Billy Forbes while both Rayane Yesli and Jonathan Sirois have been in goal for clean sheets and results.

“It’s about our level of competitiveness and the guys feeling good about themselves and their teammates,” said Dos Santos. “Of course, that comes with results, but I just think there’s an aura of confidence right now and when it’s like that you tend to play better. Collectively we’ve matured a lot and our ability to preserve leads has been very good. But we can’t sleep. We need to keep doing the little things right.

“I shared this with the guys this morning: one of the first things you learn to do when you’re in the military is make your bed. The reason being? The little things matter. If you start the day with that mindset, then it will translate in the big picture, and we need to carry that into every game right now.”

After Saturday’s visit to Halifax the club will be home to Atlético Ottawa on Sunday, September 18th before finishing with three straight on the road in trips to York United FC, Cavalry FC and FC Edmonton.

It was three matches ago when Dos Santos began preaching to his squad to consider their final eight as the team being in tournament mode. Three victories later and it’s clear the team is all-in with that approach.

“I felt a shift in mentality in the last few weeks nothing that we had our backs up against the wall,” said Cebara. “It’s do or die and now or never for us and we have to continue to make the most of it and capitalize on it. We need to keep working to get maximum points and not rely on other teams to help us out with their results. We’re in the driver’s seat, but we have to take command of our own future.”

-Valour will be without MF Alex Riggi against the Wanderers, his old squad, as he picked up two yellows in last Sunday’s 1-0 win over Forge FC.

-Veteran Daryl Fordyce was initially reported as being ineligible for Saturday after he picked up his fourth yellow against Forge, but he had one yellow rescinded after going five games without being cautioned.