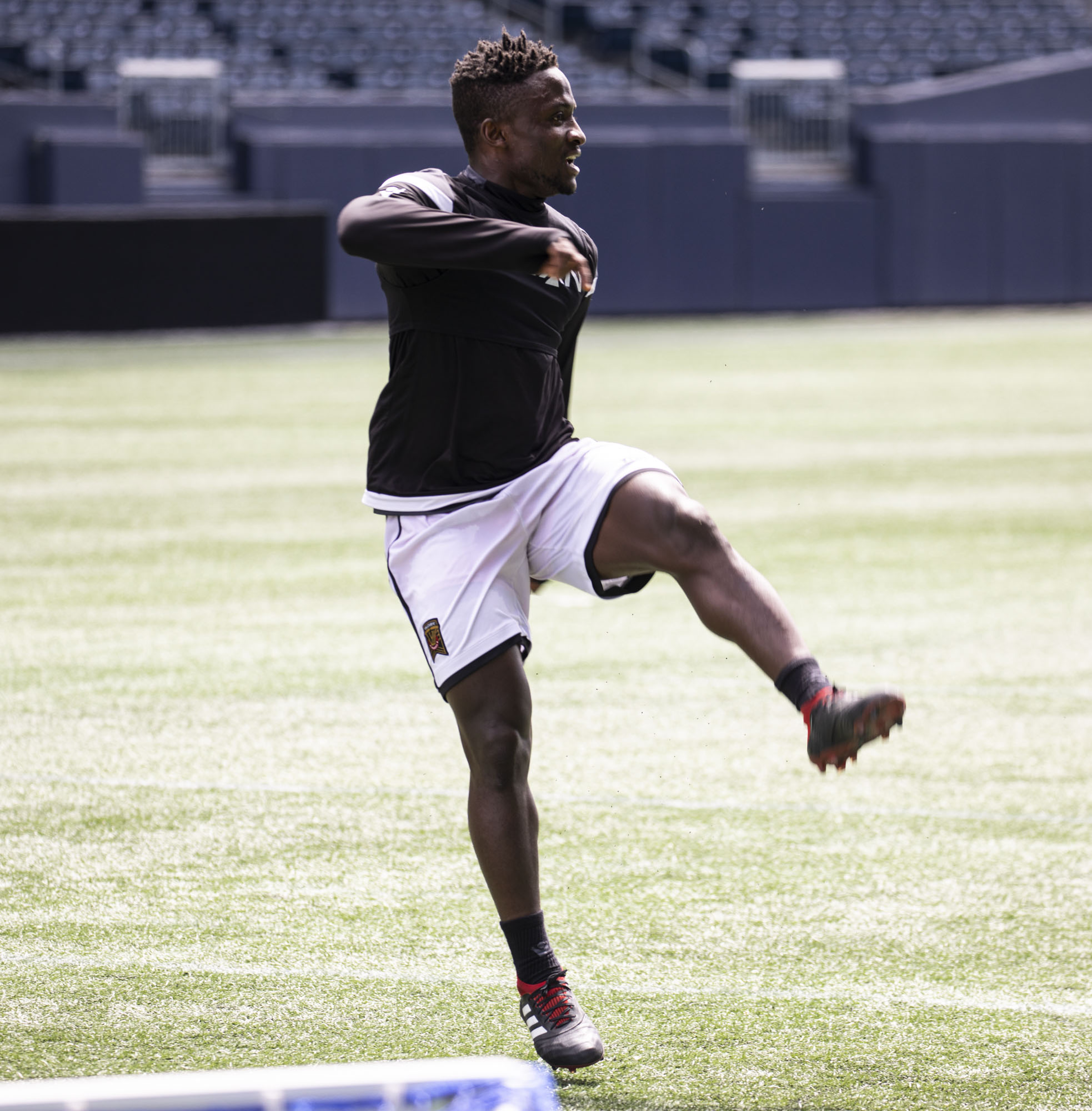 It’s a heartwarming story, first and foremost, and the world could certainly use a healthy dose of that sentiment these days.

Yet peel back the layers of the now-intertwining tales of Raphael Ohin and Solomon Kojo Antwi and theirs is a story that is also both riveting and improbable.

Consider, after all, the basics here: two soccer players, both from Ghana, have not only been united here in Winnipeg as teammates with the Canadian Premier League’s Valour FC, but are now friends – almost brothers – under the same roof.

“I guess you could say it’s fascinating,” began Ohin, who made 20 appearances last season with Valour. “I remember when I first came here. A lot of people didn’t know about Winnipeg. It’s like, ‘Winnipeg?!’ But I can say now the people here are my family.

“Winnipeg has been a blessing for me. I never expected that. Winnipeg has given me opportunity and made me who I am. It’s given me my dream to play a game I love.

“Solomon and I are very fortunate. Sometimes it’s a very small world. I mean, when I heard last year about us signing another player from Ghana… I thought they were kidding.”

“I cannot believe it,” added Antwi. “I’m so comfortable. I’m so happy. I am so blessed.”

Ohin, 25, hails from Accra, Ghana’s capital, and arrived in Winnipeg in 2016 after playing in Switzerland, Germany, Thailand and Sweden. Antwi, meanwhile, is a 19-year-old attacker who was born in Elmina, Ghana – four hours from Accra – and moved to the capital when he was nine before being discovered by the Glow-Lamp Academy.

He arrived in Winnipeg on Boxing Day after never having travelled before and settled in with Ohin and his aunt’s family – the Yeboah’s. They also train and workout together, with Ohin acting as a mentor. 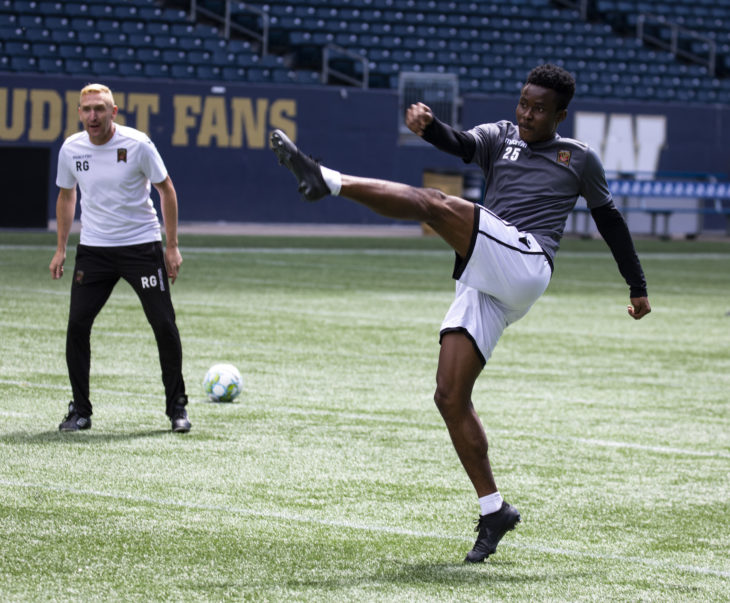 “I’m so comfortable. I’m living with Raph and the Yeboah family and I’m so happy. They are taking good care of me,” said Antwi.

“I’m so lucky to have met someone like Raph. He has experience and he has helped me so much with my first professional contract. He talks to me every day and he’s taking good care of me.

“He’s a friend, an older brother and a teammate for me. He has so much experience in everything since arriving here four years ago. Before I signed with Valour FC my agent was talking to me about Raphael Ohin. He told me there is a Ghanian player on the team and that would make it a little bit easier for me to be there. I knew I would have a friend here who could take care of me.”

Indeed, Ohin has walked in Antwi’s footsteps. He arrived in Winnipeg five years ago after leaving home to play soccer and suiting up in Switzerland, Germany, Thailand and Sweden. But his journey could hardly be represented by a straight, upward arrow. Ohin said he had some ‘dark moments’ and through his faith – and the Yeboah family and his supporters in Winnipeg – he is now in a good place, both physically and spiritually. 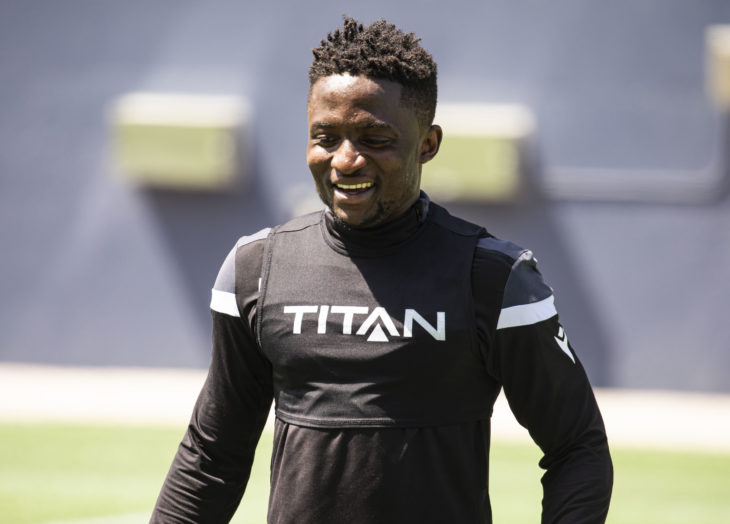 “My faith is very important to me,” Ohin said. “Prayers kept me going; prayers and the support of my family. I had pastors and people I know talk to me and say, ‘Keep going, God is not done with you.’

“I came to Canada by myself. The transition can be scary because you don’t know anyone here. It’s, ‘How am I going to survive?’ I knew I had extended relatives here, but I wasn’t born when they migrated to Canada. Through the help of Pastor Carter Nevis here in Winnipeg I was able to connect with them and I can’t tell you what a blessing it has been.”

Ohin followed much the same script as when he was first signed by Valour in January of 2019 by again thanking all those who have supported him in his conversation with valourfootball.club. That crew includes his aunt and her family, along with Pastor Nevis, to St. Charles Force coach Raff Cantafio along with former WSA coaches Eduardo Badescu and Wiliam Rosales and lawyer Joe Aiello.

“There are so many who I should thank,” he said. “It wasn’t easy when I got here, but the family has been not only supportive, but a blessing to me. Solomon and I talk all the time about the importance of these kinds of things.

“It can be very hard to leave your family, leave everyone back home, especially for someone who has never travelled before. Then coming and living with strange people you have never even seen before? That can be hard. I try to help him out as much as I can. At the beginning he was very shy, but he is getting more comfortable.”

The comfort comes from finding a new home away from home, from being surrounded by so many who are willing to help Antwi in his first few months as a professional.

“My mom is always happy because I’m in a good house and they have put me on a team where Raph is there and he can help me,” he said. “They are amazing. Everyone in the house is like a family. They treat me as their own son.

“Every day when I wake up I thank God for them. I thank him for their love and everything they have given me.”