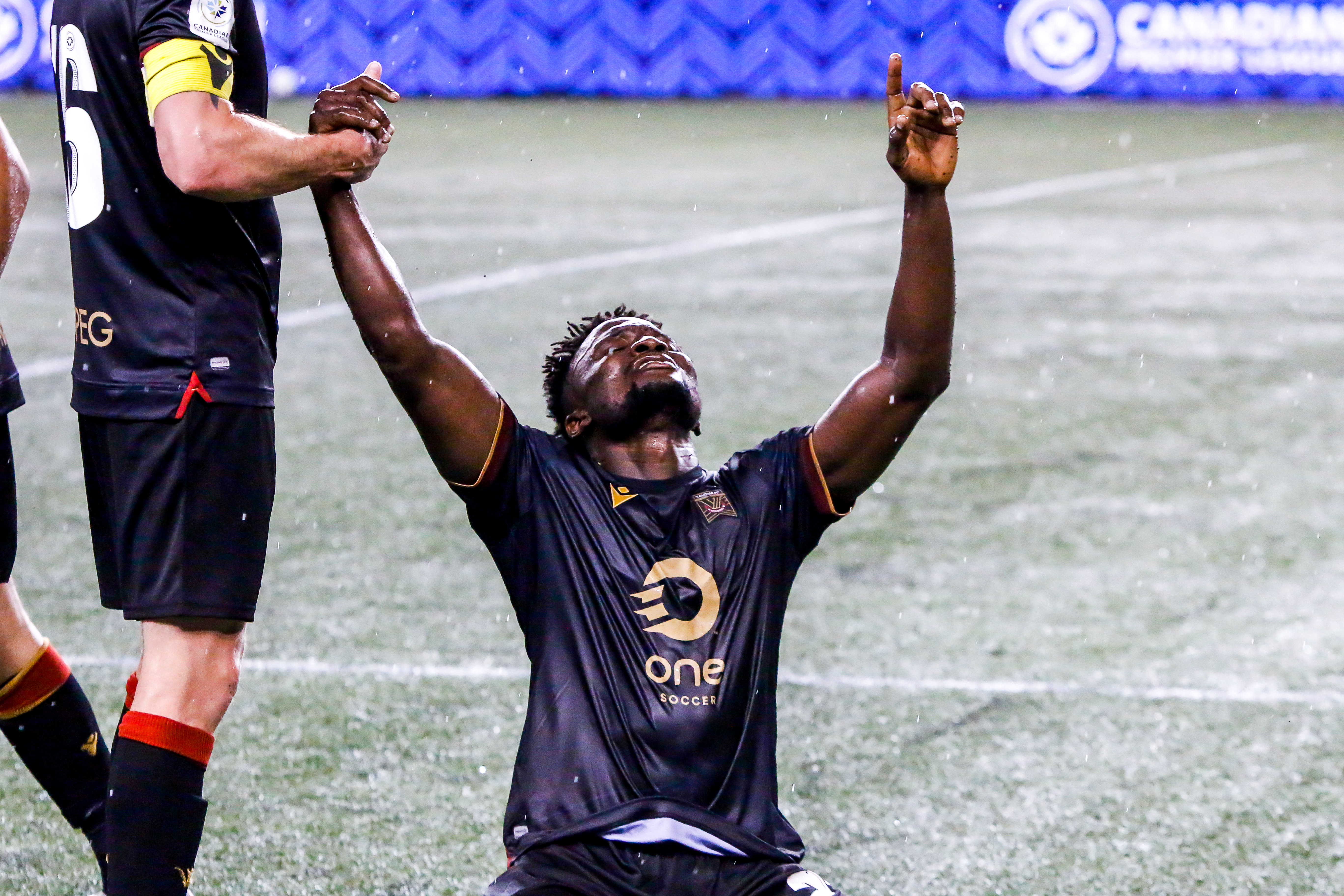 July 3, 2021. Valour FC vs. Atlético Ottawa. First-Half. An emotional Raphael Ohin of Valour FC celebrates his first goal.
“The goal is to win. I have a championship mentality going into next season.” | Ohin returns for 2022
December 30, 2021
by
Joshua Frey Sam

Raphael Ohin doesn’t like to dwell on the past too much, despite his adventurous history.

He travelled throughout Europe and Asia as a teenager, playing soccer. But when he moved to Winnipeg with his aunt in 2016 to continue chasing his dream, he told himself that Canada would serve as a clean slate, a new chapter, and an opportunity to rebuild himself.

Professional soccer was always the dream for Ohin. Born in Ghana, he grew up watching Arsenal religiously, idolizing midfielder Alexandre Song, who grew up in Cameroon, roughly 1,500 kilometers east of his hometown.

It was Song and Ohin’s older brother, Shadrack — a right wing in his hometown — who pushed the young footballer’s desire to be a professional. Now a key cog in Valour FC’s midfield since 2019, Ohin is returning on a one-year contract to chase a championship with the only club he’s called home.

The decision to return to Valour was an easy one for Ohin, despite having other offers on the table.

“This isn’t the time for me to close this chapter,” he said. “This is my city. I love my city, I love the people here, and there would be nothing better than winning a championship with my home club.”

Ohin admits the journey hasn’t been easy, in fact, it was a bit of a struggle — as is with most things worth pursuing. As a child, he fought with the other kids in his neighbourhood about who got to play with the only soccer ball. His mom wouldn’t stand for it, so she bought him his own ball.

Ohin’s talent and work ethic translated to excellence at a young age. He played U12 soccer when he was just nine-years old and was scouted to FC Basel 1893, of the Swiss Super League, at 15. The cross-continental opportunity was a teaching moment for the teenager experiencing his first taste of international competition.

“It was amazing. The environment is so much different,” he said. “It was an eye-opener that I have to step up my game if I want to play at the next level.”

Ohin thought his early success would carry him to the pros at the ripe age of 18, but humility set in quickly. It wasn’t until eight years after that taste of high-level, Swiss competition that Ohin got his chance at the professional level.

But even that came with some good fortune.

Valour FC didn’t exist when Ohin arrived in Winnipeg. He spent his days doing home-workouts alone and field work with U10 inner-city kids. Ohin said it was fun playing with the kids, but there were days he thought he might be chasing an empty dream.

“It can be frustrating when the question you ask yourself is ‘what am I training for?,’” he said.

But the midfielder persisted in hopes someone would see him while training with the young players. And someone did. Eduardo Badescu, a UEFA pro from the Winnipeg Soccer Academy, heard about Ohin through the grape vine and decided to give him his first North American, semi-professional tryout in USL League Two, formerly the Premier Developmental League.

The competition was too easy for Ohin. He was a special talent, and it was clear that he had experience outside Canada. By the time Valour joined the CPL in 2019, he was ready to make the jump. His tenacious play-style wowed coaches early, but he spent the first two games of his professional career on the bench, until an opportunity presented itself in the third game.

The midfielder showcased his versatility immediately, filling in for an injured Skylar Thomas at centre-back. Despite the head-scratching decision from his coach to put a midfielder at defender, Ohin didn’t question the chance to play, and he passed the challenge admirably.

He carried that momentum over to a full-time role in the midfield in a shortened 2020 season, but it wasn’t until 2021 that Ohin finally felt comfortable and confident. The 26-year-old appeared in 26 games last year, recording one goal and two assists in 2001 minutes played. He also finished second in the league in ball recoveries (211) and seventh in successful duels (149).

Ohin knows the stage is set for a breakout year in 2022. “I’m looking forward to next year,” he said with an eager inflection in his voice.

Valour GM and head coach Phillip Dos Santos is optimistic about Ohin’s potential, making the decision to bring him back an easy one – especially as the club is stressing an emphasis on continuity and stability as it chases its first playoff berth. “He’s an excellent pro,” Dos Santos said of Ohin. “When you have someone like that, the chance that he’s going to improve are very high. “We feel it’s not easy to be in the market to find a player with his characteristics.”

Ohin’s unrelenting playing style has gained the respect of his teammates, coaches, and the league in his three seasons, but now Dos Santos is going to challenge his midfielder to turn those efforts into production on the score sheet.

“He’s no longer a young player. He’s a young man,” said Dos Santos. “He’s a guy who’s going to need to take space in the locker room now and lead with his play.”

Ohin is ready for the personal challenge, but also sees this season as an opportunity for his team to reach a coveted milestone — a top-four team in the CPL.

“The goal is to win. I have a championship mentality going into next season.”