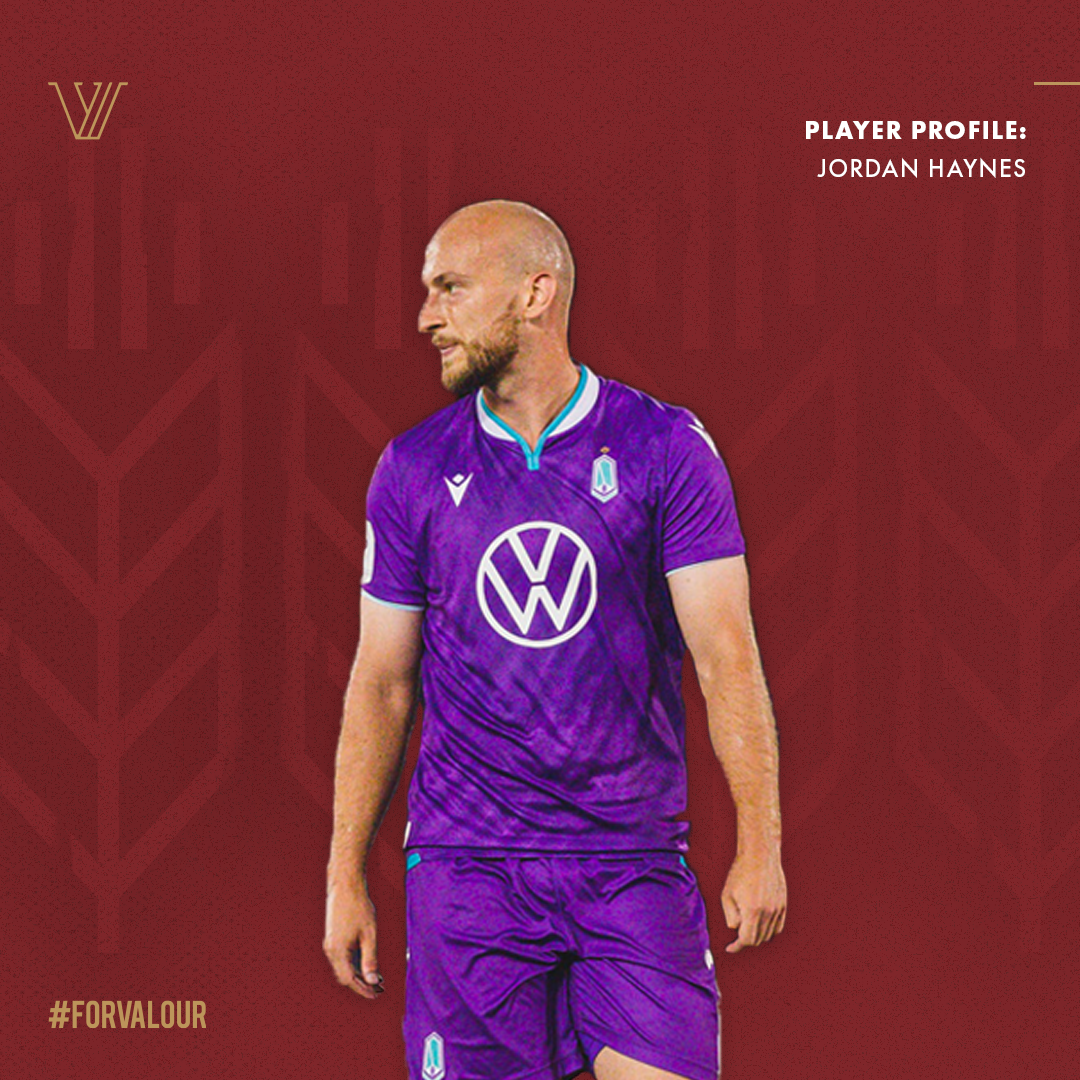 “This is a new challenge, working with a new group of players and it’s a fresh start.” | Player Profile: Jordan Haynes
December 5, 2022

It’s long been said that you can’t build a great building on a weak foundation. Jordan Haynes came to understand that from an early age and it’s a philosophy he’s carried throughout a soccer journey that has now brought him to Winnipeg.

Valour FC announced the signing of the veteran left back on Monday and the 26-year-old brings not just experience and a championship pedigree to the Canadian Premier League club after three seasons with Pacific FC, but a hardhat and lunch pail approach to the game.

Little wonder, as his father Mark, his mother Sandra and older brother Joshua own and operate a family business in Peterborough, Ont. – ‘The Footing Guy’, which specializes in concrete foundations.

“My dad has always said the way I play and the way I live my life is as a Haynes,” Haynes explained in a chat with valourfootball.club. “Obviously we do two completely things, but the skills and attributes we both have we apply in the same way, just in a different manner. The type of person and player I am on the field is the same attributes my family has.”

The addition of Haynes is part of a Valour retool this offseason by GM and head coach Phillip Dos Santos and his staff. The departure of Brett Levis to FC Tulsa of USL Championship left a hole at left back and bringing Haynes in gives Valour a player with CPL experience – and a 2021 league championship to his name.

“It was important to get a good league guy, someone who had experience in the league that was a natural left-footed left back,” said Dos Santos. “He’s a player that has won in this league, that understands this league and can make an easy adaptation. I really think you need players that have won. It’s so important. It could be a win in the CPL, but also players who have won in other parts of the world. You need that.” 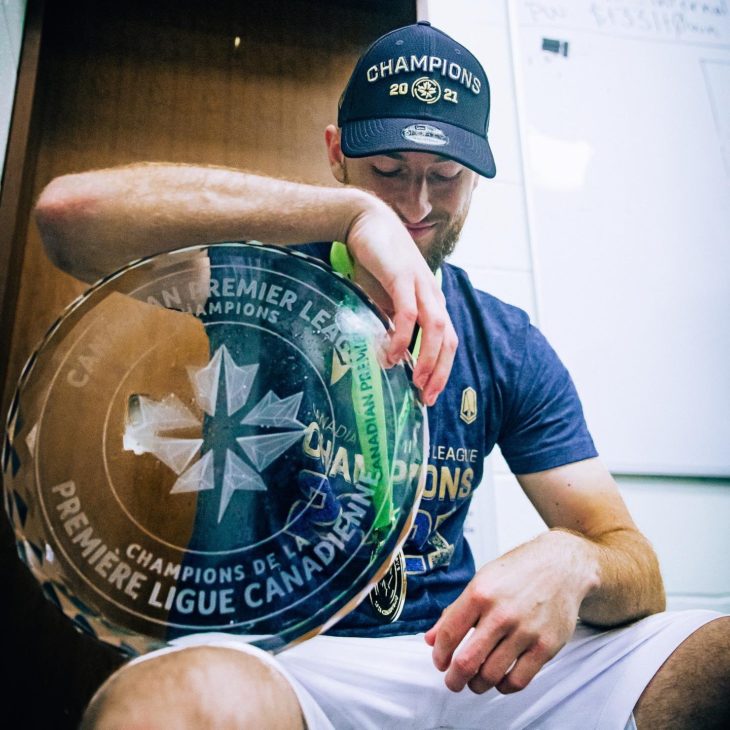 “It’s also difficult to find good left backs in this league and we were able to bring him here without knowing he already has ties with Winnipeg. That did make things easier.”

Those ties? Haynes is engaged to Celeste Gallego, a former University of Manitoba Bisons soccer player whose family is from Winnipeg.

“What’s funny about all those jokes I’ve heard about it being cold here is as soon as I heard I was coming I ordered a pair of winter boots and a winter coat and had them sent to my fiancée’s father’s house because I wanted to be prepared,” Haynes said with a chuckle. “So, I’m not coming here unprepared for this winter.

“But I grew up for the most part in Ontario. It’s maybe not the same, but it is similar. The winters might not be as harsh, but it’s not like I’ve moved north from Mexico.”

Haynes also has a connection with Dos Santos, even if it was distant and brief, as the two were first introduced at a national ID camp years ago for Canada’s U-17 side that participated in the 2013 FIFA U-17 World Cup.

“In talking with Phil, everything is about the process,” Hayne said. “I see the long-term plan. He’s a very good technical and tactical manager but from a player manager side he’s really good with people. He was very persuasive, but I see the vision.

“Sometimes you hear a lot of words and there’s no backing or meaning; it’s just like fluff and you’re saying everything I want to hear. But with Phil and other people I’ve worked with in the past there’s a plan and there’s a process… it’s not all about incentivizing players to come here. There’s a purpose to what he’s saying. I appreciate that.

“This is a new challenge, working with a new group of players and it’s a fresh start. A lot of people benefit from a fresh start and I’m really looking forward to this myself.” 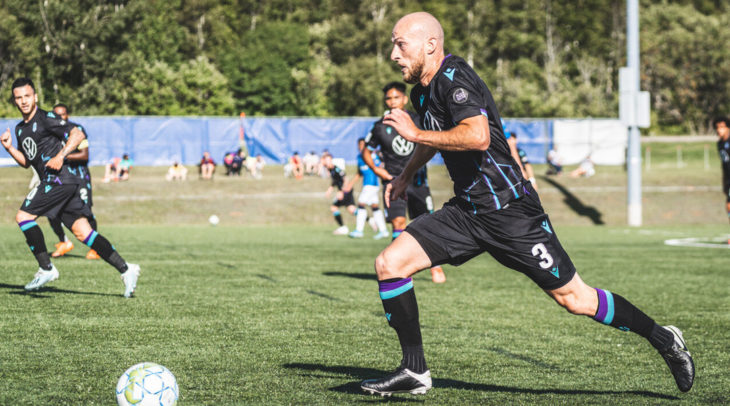 Haynes began playing when he was five in Peterborough and became hooked on the international game as a fan, he explains, when his mother switched on the TV one afternoon and he saw Arsenal FC in action. He is still a diehard fan of The Gunners.

His own skill was spotted early, and after working with Toronto FC’s Academy for a year Haynes was offered a chance to go to overseas to be part of the Queens Park Rangers academy at age 15. Upon arrival in London, he was told he wouldn’t be able to get an ancestral visa – his grandmother is from Scotland – until he was 17, so he returned to Canada, this time with the Vancouver Whitecaps Academy.

“Then my journey got long and hard,” said Haynes, who moved to Oklahoma City Energy of USL Championship, then Vaughan Azzurri, Calgary Foothills, TSS FC Rovers in Burnaby and then the University of British Columbia in 2019 – the same year the CPL was born.

“I was out of the pro game for a bit, and I have the CPL to thank – like many others – for the opportunity to play pro,” he said. “I was given a chance after my one year of U Sports with UBC with Pacific.”

Haynes has 50 CPL regular-season and three Canadian Championship matches on his resumé from his days with Pacific and has carved out a reputation as a steady and reliable defender.

Again, his game – like the Haynes’ family business – is all about the foundation.

“I live my life with a win-first mentality,” he explained. “What’s it going to do to win? How can I help the team win? I’ve learned that being coachable is one of the best attributes you can have, along with using your listening skills.

“Over the past I’ve also learned the importance of simplicity. There’s a saying that the hardest thing to do is to do the simple thing. That’s doesn’t mean taking the easier route, but if you do all the simple things correctly it will lead to goals and winning games.

“It’s not about doing the flashy things or the things that look good. Those don’t always turn into three points at the end of the day and those points are what it’s all about.”